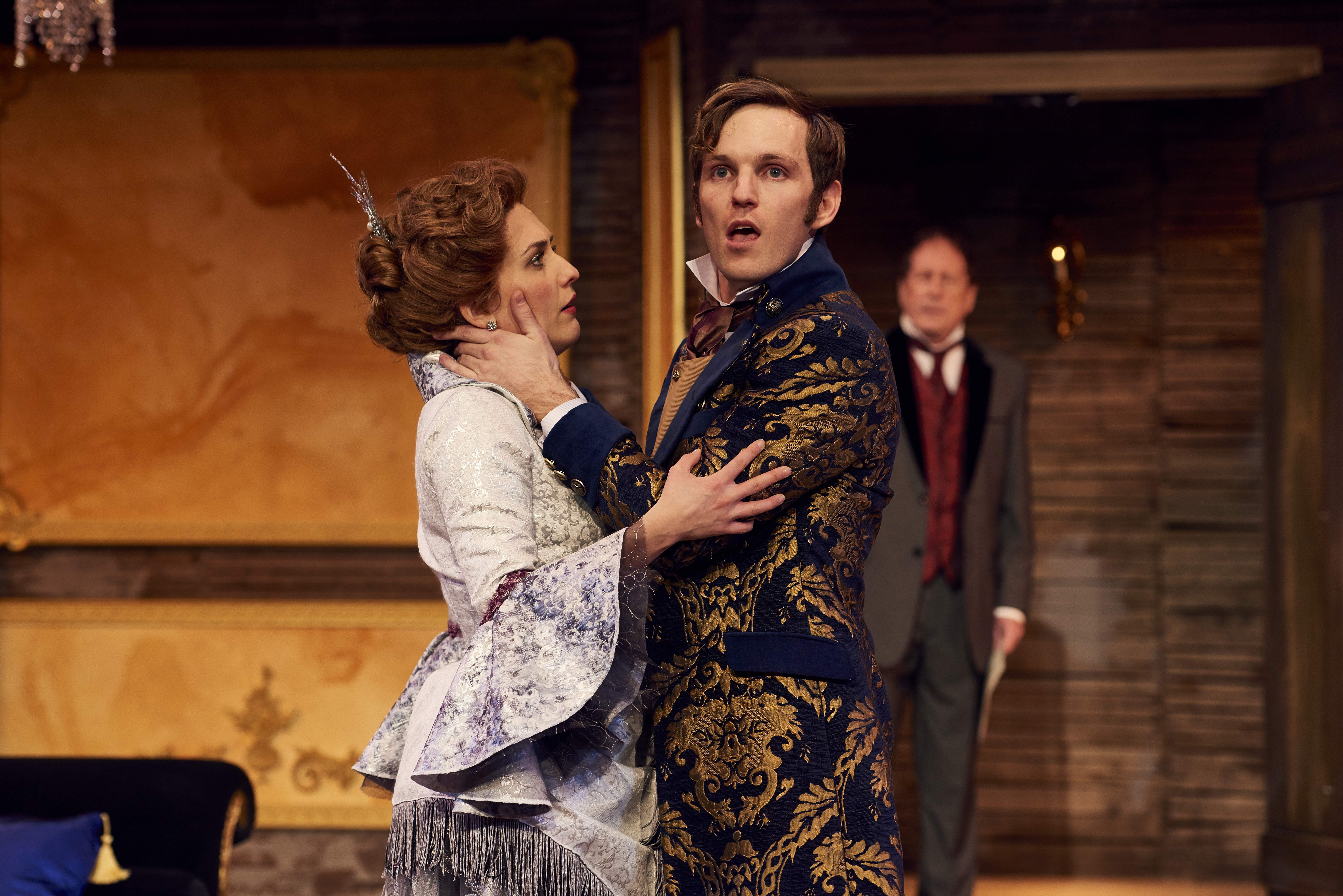 It is time we collectively retire the word “relevant.” While its antonym remains formidable (especially within the critic’s arsenal), “relevant” has become the tasteless paste of a word endlessly chewed if rarely swallowed. Frequently attached to the work of dead white male playwrights, it has become the rallying cry (or perhaps death rattle) of an art form that seems disinclined to talk about its pressing and inherent problems of class, race and gender.

So I wasn’t surprised to see it attached to Ranjit Bolt’s translation of Eugène Scribe’s “Puff: Believe It Or Not,” directed by the thoroughly capable Nick Sandys at Remy Bumppo. Scribe is, after all, quite white and very dead. But at the conclusion of the play’s overlong run time, I  wondered whether the tag of “relevant” didn’t obscure our understanding of this work, forcing it through a lens of modernity that blurred rather than clarified its messages and humors? Does this seemingly insatiable need to situate everything in the here-and-now potentially injure our appreciation and understanding of the there-and-then? For a play that is, according to Sandys, about the point when “‘the truth’ is no longer a viable commodity,” doesn’t using a word whose meaning is as slippery and amorphous as an oil patch participate in a similar process of dilution?

Such headines may seem ill-suited to a Wildean comedy of errors but when it comes to allusions to Trumpisms, particularly the destabilizing of truth in favor of more mercurial truthiness, I’m not buying what Sandys is selling. Which is not as distinct a disadvantage here as it has been in more insistently “relevant” productions from the past year. What “Puff” has in spades is character-driven comedy and some terrific actors to embody those characters, from Remy Bumppo regular Kelsey Brennan (who finds her complement in Christopher Sheard’s flirtatious flair) to newcomer Netta Walker, who draws Joshua Moaney’s protagonist out of his rigid, militant conformity and into a shape more comedically pliable and pleasing.

The women make this work, ironically best exemplified by their absence in the stilted, stale and stuffy opening act that finds our scribe laying both the foundation for his occasionally tedious plot as well as the moral ground he intends to cover. With its vowel-laden character names, keeping track of the offstage action can easily become a distraction and the play’s regular return to economics can feel like watching the climactic stock exchange scene in “Trading Places” on “Groundhog Day”-like repeat.

“Puff” is at its best when it lets the connivers do what they do best: connive. In that respect, Brennan’s Corrine Desgaudets is this play’s ace in the hole, a meticulous memoirist intent on capturing all of her life’s many escapades, some of them even before they happen. Her scenes with Sheard are the play’s best, their physicality matching and in some cases exceeding the acrobatics of Scribe’s text. In the game of love, Walker may be the play’s romantic foil but she is positively radiant with joie de vivre and deeply charming in her performance of the stutter steps of puppy love.

Ranjit Bolt’s translation retains the playwrights wordy wit, replete with enough chiasmus and double entendre to make your head spin. Scribe’s humor frequently has the ring of a precursor to the Marx Brothers, albeit without their signature non sequiturs. “Why would he woo me if he didn’t want me?” Corrine ponders at one point. One can imagine what Groucho might have to say about the matter.

Within the ensemble, delivery varies. As Maxence de la Roche-Bernard, Gregory Geffrard has yet to find the emotionally volatile playboy’s swagger though to be fair he does have a lot of lines about francs and finance. David Darlow’s energy tends to run a few notches below the rest of the cast, which is fine when he is not required to carry a scene. As for visual appeal, Rachel Lambert’s costumes split the difference between Prince’s wardrobe and NBA chic, putting the company’s nonprofit budget to exceptionally good use. (Sheard’s shoes alone are worth the price of admission, possibly literally.)

All’s well that ends well though Scribe makes sure to really put the screws to his protagonist before defaulting to a happy ending. One could say it was well-earned, although within the economy of this play it was, as so much wealth is, simply inherited. (Kevin Greene)