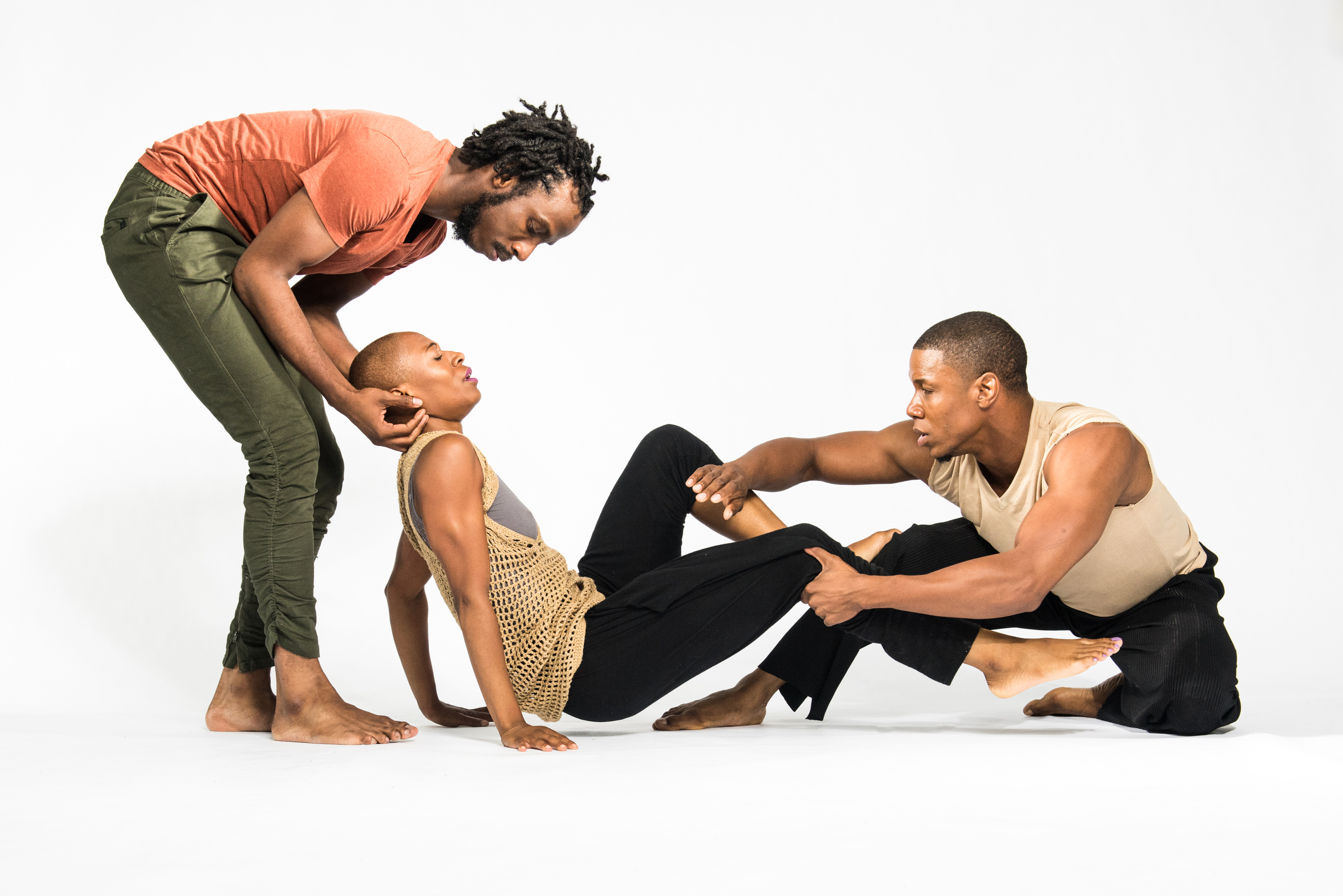 The members of Deeply Rooted Dance Theater have spent the better part of their twentieth-anniversary year living very much up to the company name, delving deeply into the most raw and vulnerable corners of their psyches as source material for “INDUMBA,” an evening-length piece by guest choreographer Fana Tshabalala. The title refers to an African healing hut, and a work-in-progress showing in July revealed that this is a cleansing through fire. Tshabalala originally created the piece in his native South Africa, ostensibly in response to apartheid and its aftermath, but the pounding heart of “INDUMBA” is profoundly personal to each performer on the stage and universally powerful to witnesses, regardless of background. The full company put on an emotional ironman of a performance at West Pullman Park, a preview of the one-night-only final performance to be staged at the Logan Center for the Arts on December 8. We spoke with Tshabalala after the showing about adaptation and evolution of the piece with Deeply Rooted.

What was the original inspiration for “INDUMBA”?
I set out to create a space where people can move freely without being judged. Sometimes we tend to forget about the spiritual aspect of moving and focus on the physical. One thing I drew inspiration from was my experience in South Africa in 1994. We had to talk about issues around apartheid, but because people forget about the spiritual aspect of healing, there is still tensions between the races. From there I searched around for areas that have gone through similar things and had spiritual practices to heal from civil war. I find that through that, people of different races get along very well; you forget if you’re black or white.

I think there’s a fear or hesitation to acknowledge spirituality as a part of political life and art making. How did you go about adapting this work here in the U.S. with Deeply Rooted?
It doesn’t matter your background or where you’re from; we’re all experiencing the same thing. I allowed them to go through the same process and then watched them taking charge and making the piece their own. When they were performing I forgot they were new to this piece. They allowed themselves to become vulnerable and I’m very proud of them for that.

What was on the stage was so deeply personal. I was struck at the moment after the applause when the dancers went to touch each other. Clearly you inspire them to mine deeply and see it as an infinite process.
I also want to create a space where they can really feel each other and feel safe.

Can you talk about that process? How you create that space?
We talk a lot and then we improvise a lot. And I take time to converse with each individual and allow them to talk to me. In this kind of a process you need to trust. Each and every day we talk and try to find what’s possible.

Are there any rules you create or boundaries you set within which they’re working?
There are guidelines I give to the improvisation. One boundary I always create is for things to always be honest to the process. If something is not honest it shows; we question it.

Several months will pass after you leave before Deeply Rooted performs “INDUMBA.” How will this work continue after you leave?
Each week they will run the piece and talk about it. Over time the piece will grow; we build this structure together but there’s a lot to process. Three-and-a-half weeks is not a lot of time. The months between now and December will give them time to process.

The intensity in the room is heightened with all the dancers present around the stage for the entire piece, and all stage elements are visible.
The dancers stay on stage continuously for two hours. We create two layers: there’s tape on the floor and chairs at the perimeter. People tend to go deeper, deeper, deeper and need help coming back into the space, so we have performers stay around the perimeter watching so they can come assist each other if they see a dancer needing help returning to the space. One thing I realize as a performer is that going off stage you lose something, you tend to relax. And when you come back you are forced to be back in this world.

It did, though I wasn’t necessarily thinking of Q&A; there’s an energy created in the performance that is very strong and I imagine there’s a variety of responses audiences have.
After the performance I had a conversation with one guy who said that during the show he wanted to leave, not because he didn’t enjoy it but because something internal was speaking to him during it and he wanted to hide from the reality. What the performers are doing, it was what he needed. Some people want to shield themselves from it, some want to experience it. That’s life, things are challenging. It’s how you deal with it.