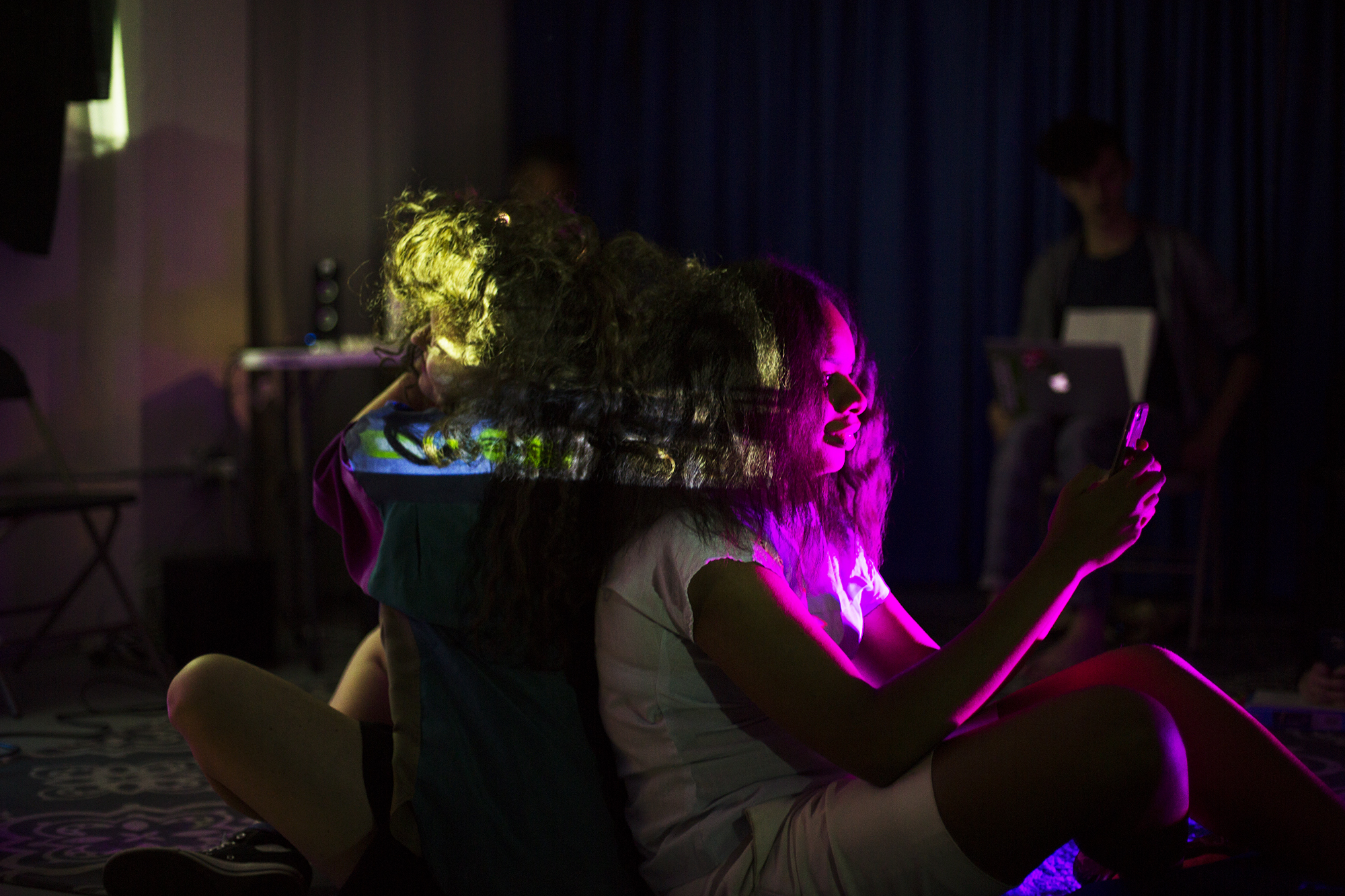 Dorothy Humphrey and Mary Kate Young in “The Portrait of Dorian Gray” a co-production between Pop Magic and The Runaways Lab Theatre/Photo: Mike Rivera

When it comes to defining DIY theater, the answers and depictions vary from company to company and person to person.

With an already large and still-growing DIY music scene, it comes as no surprise that DIY theater plays a significant role in how Chicago artists choose to orient their work. The freedom of creative and artistic expression is coupled with the comfort of a community. Many spaces and venues rent out or make themselves available to burgeoning artists. 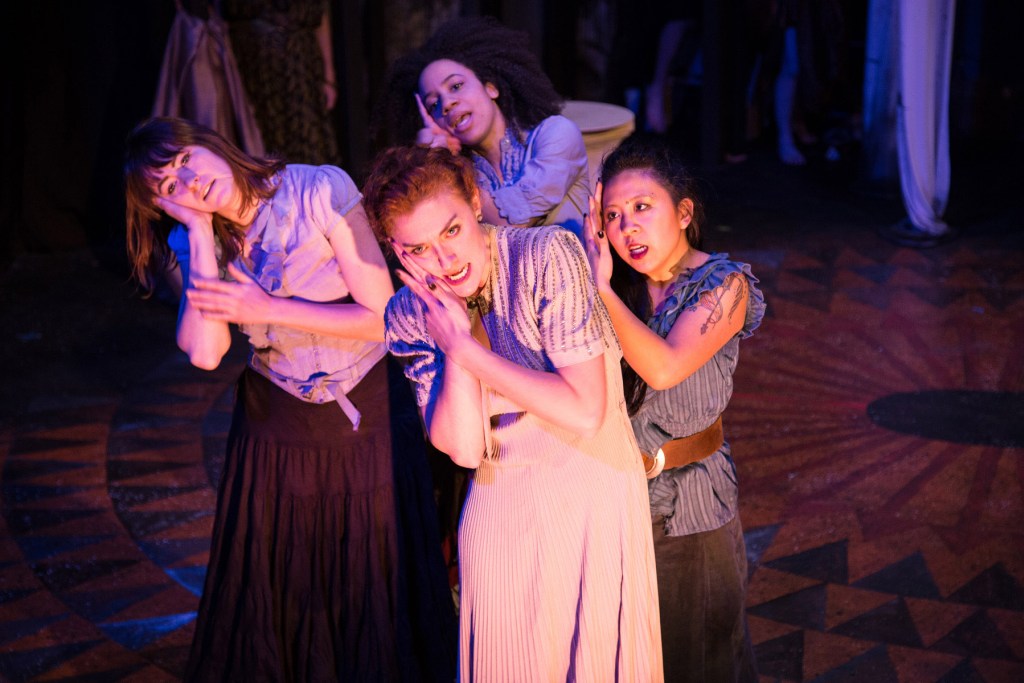 “One of the reasons I’m in Chicago is that there’s an enthusiasm and hunger for new kinds of work,” Walkabout Theater Company artistic director Thom Pasculli says. “There is something about the DIY movement right now.” Walkabout focuses on performing “new site­-specific and experimental work in Chicago, challenging traditional theatrical models.” 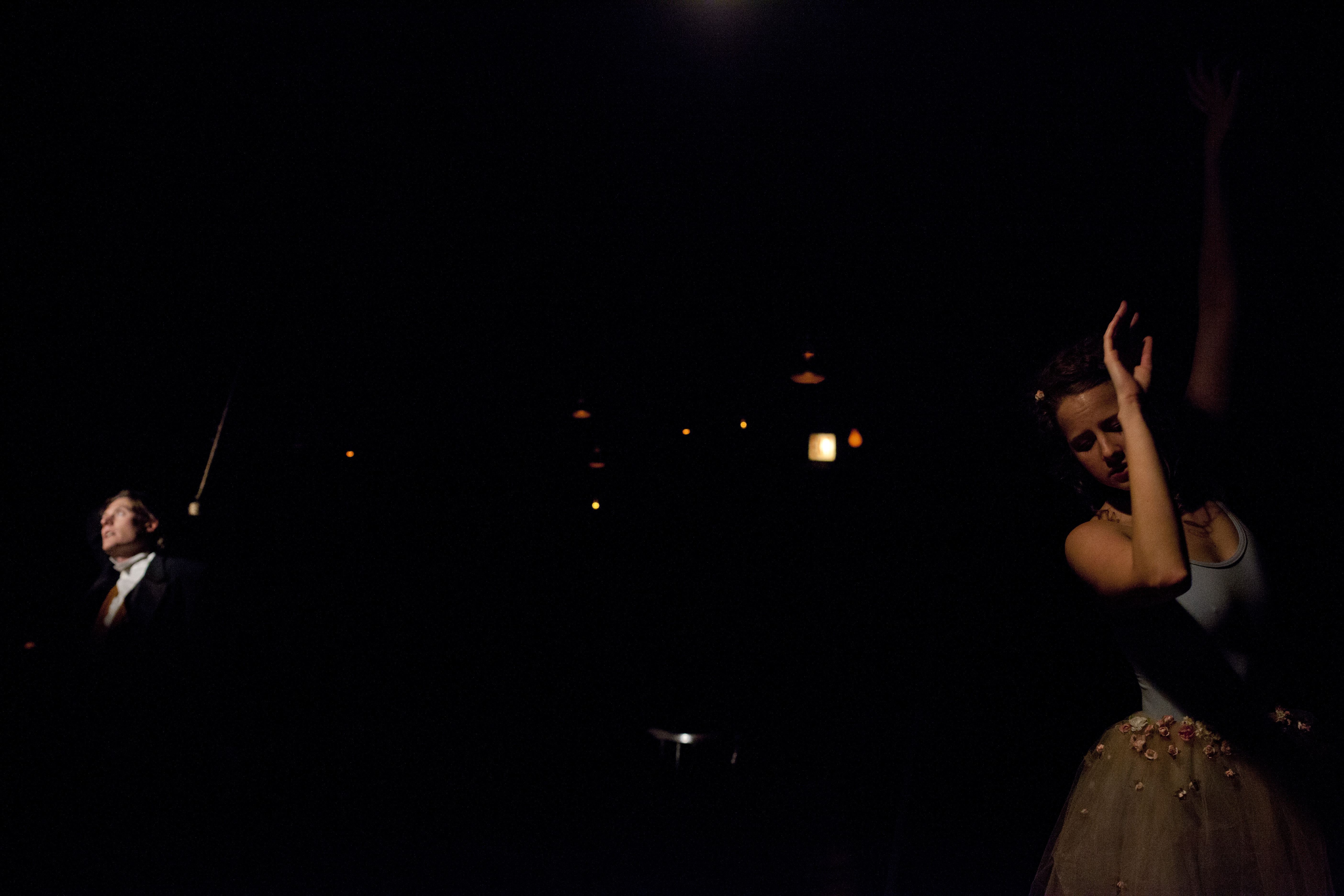 The Runaways Lab Theatre identifies as a theater company that “produces work free from the expectations of traditional theatrical performance.”

“We understand all these designations but they’re not always necessary,” explains artistic director Gannon Reedy. “We just want it on our terms and explored in a different context.”

Reedy believes it’s possible to retain what makes theater exciting and accessible while also experimenting with the platform and figuring out what draws people in. As founder and former artistic director of the Runaways, Olivia Lilley also thinks that DIY theater goes against the grain of traditionalism within theater. She is currently the creative director and co-founder of Pop Magic Productions, which focuses on creating events that are attended “as often and as casually as a bar or club.”

“DIY theater is making theater in the recession,” says Lilley. “The traditional elements of theater are relics from a dead time. What do we have to lose by changing it up and making sure people are engaged?” 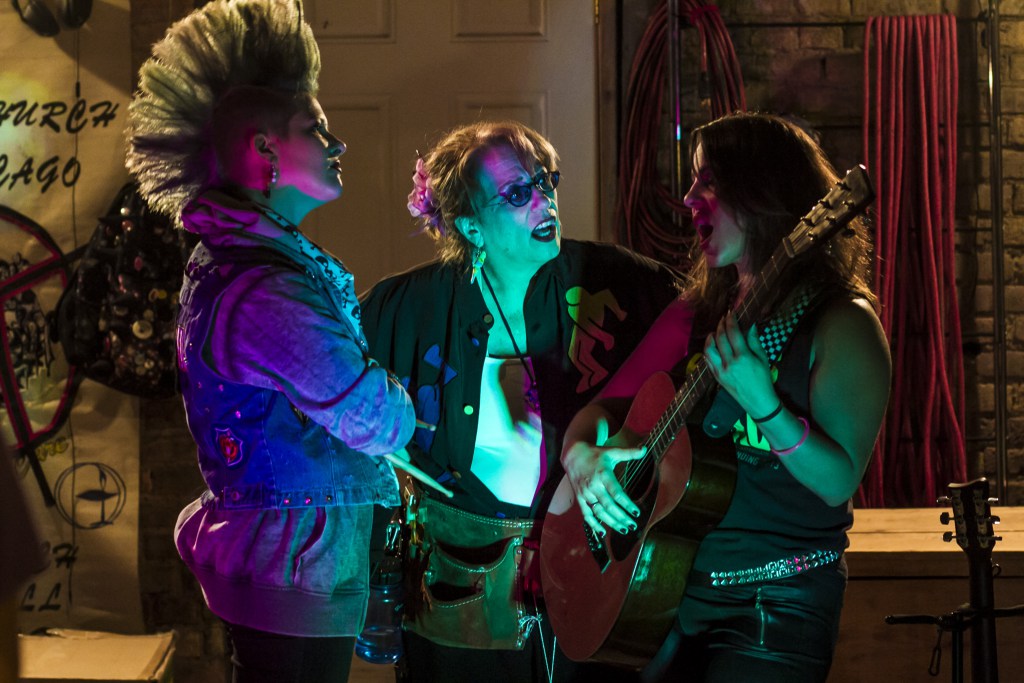 Nothing Without A Company’s co-artistic director Anna Rose Ii-Epstein finds that the term “DIY theater” is misleading because, she believes it should be “DIT: Do It Together.”

Nothing Without A Company focuses on bringing “theater works to Chicago in non-traditional spaces.” Co-artistic director Hannah Ii-Epstein finds that there is a passion behind DIY theater that isn’t present in other forms. “There’s that extra layer of contact, that extra connection,” she says. “We come up with ideas of things you can’t buy anywhere. There’s a layer of rawness. There’s a collaborative nature to it.” She finds that in her company’s shows, there is little separation between the audience and the actor. For both parties they try to create an inclusive and open environment.

Pasculli believes that DIY theater is a culture, a way of working and living that moves toward a holistic approach. “This includes the self as an individual, as a vibrant being, and the audience, who wants to be included in more of the experience than just the finished product,” he says. “Rather than just show you the best parts of a performance, DIY includes you in the process. DIY theater artists try to create a theatrical space but they also manage to involve the audience through an artistic process and lifestyle.”

Pasculli notes that the space for different roles for artists is more flexible in DIY theater as opposed to traditional storefront and black box theaters.

“In traditional models, there is this intense specialization of artistic roles,” he says. “Your job is economically efficient and clearly defined when you walk in the door. A more non-traditional model of collaboration allows for a crossover between production, collaboration and artistry. It changes how we think about ownership.”

Though there may be discrepancies about what space means to individual DIY theater artists, there seems to be a consensus on how they approach the artists they work with and the audiences they perform for.

Lilley, in her work at the Runaways and also at Pop Magic, has often devised and worked within her group of artists-actors to create a show. “In my early work, I saw myself more as a director with found text, with actors who helped create it,” she says.

Anna-Rose Ii-Epstein similarly describes how different members of Nothing Without A Company may think of a concept, get in a space with collaborators and work on a structured improvisation of the concept. 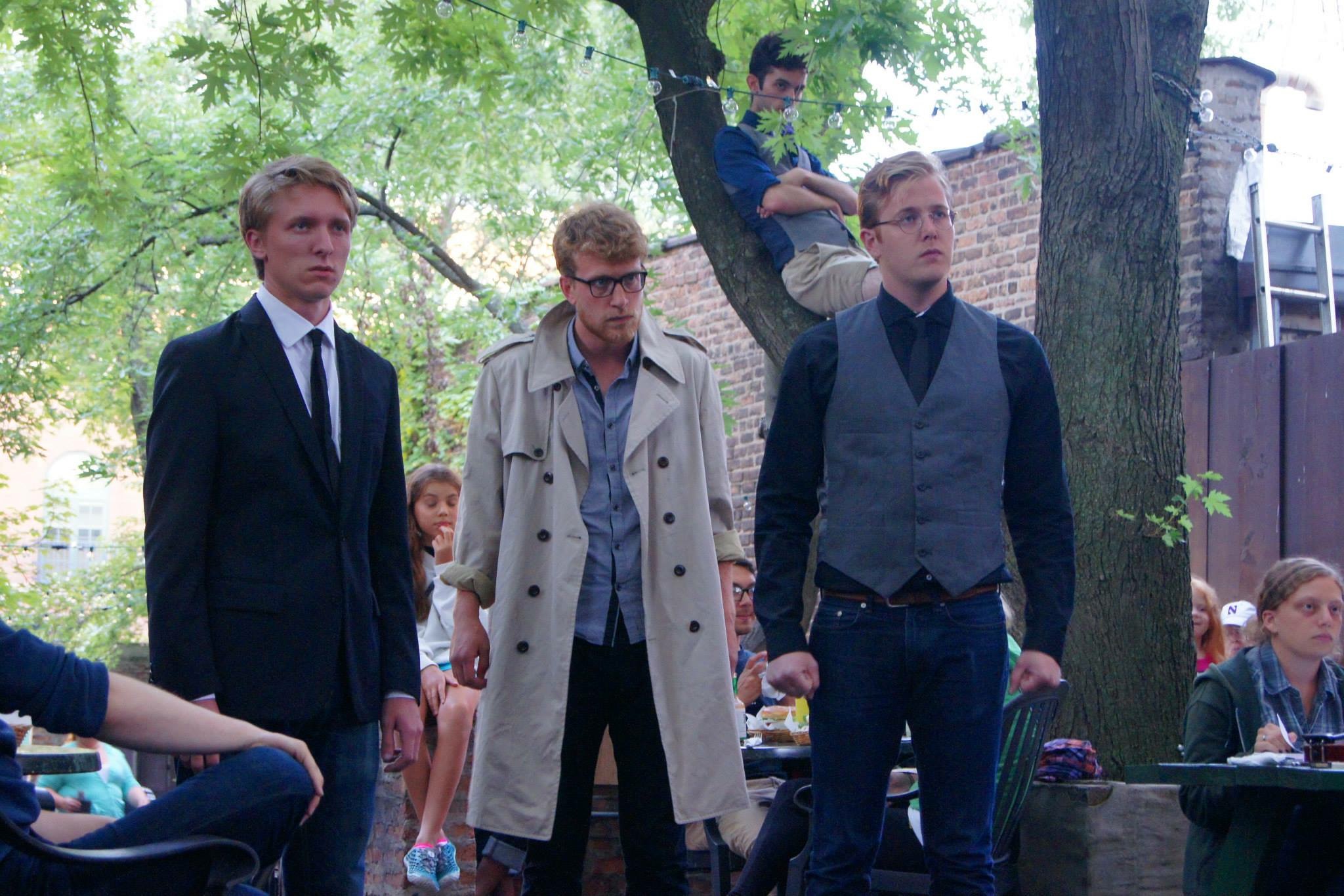 Rabid Bat Theatricals is a group of artists who put their passion and love into creating theater that is “accessible, entertaining [and] community-forming.” The ensemble members collaborate openly through their work, though they see themselves more as a group of friends working on a passion project, rather than an institution.

Rabid Bat Theatricals seeks out spaces where their audience members will already be. Their relationship with Chicago Park District has allowed them to perform in parks for people who didn’t expect that they would be seeing a show. The goal has been to make theater more accessible.

“If you look at theater in the twentieth century, much of it was reserved for a specific subsection of class, race and cultural background,” explains ensemble member Ned Baker. “I hope that people will continue to challenge strict rules and expectations on who is allowed to do what and where.”

Nothing Without A Company found that DIY venues often have accessibility issues. For the future of DIY theater, Hannah Ii-Epstein hopes that space and tools can be acquired more easily. Anna Rose Ii-Epstein finds that it is possible to transition to a high-scale space though there are complications if a company wants to remain truly independent.

“DIY doesn’t feel sloppy at all, but rather raw and intentional,” Pasculli says. “We need to mess up some of the institutions before we can rebuild them. And the way communities ping off of each other, there’s a cross discipline and cultural inspiration happening.”

The act of DIY theater itself can be seen as subversive, as a political statement. To study theater traditionally only to forego the path to convention, producing instead often non-lucrative work minimizes the priority of money, a factor of considerable consideration in the theater world. “The content of the work doesn’t have to be political at all,” says Pasculli, “The form itself is political. The act of doing it is the revolution.”

There is no single agreed-upon definition of DIY. And yet, the collective nature of it, the non-traditional approach to staging and the desire to involve each artist and audience member in the creative process, echoes through its practitioners.