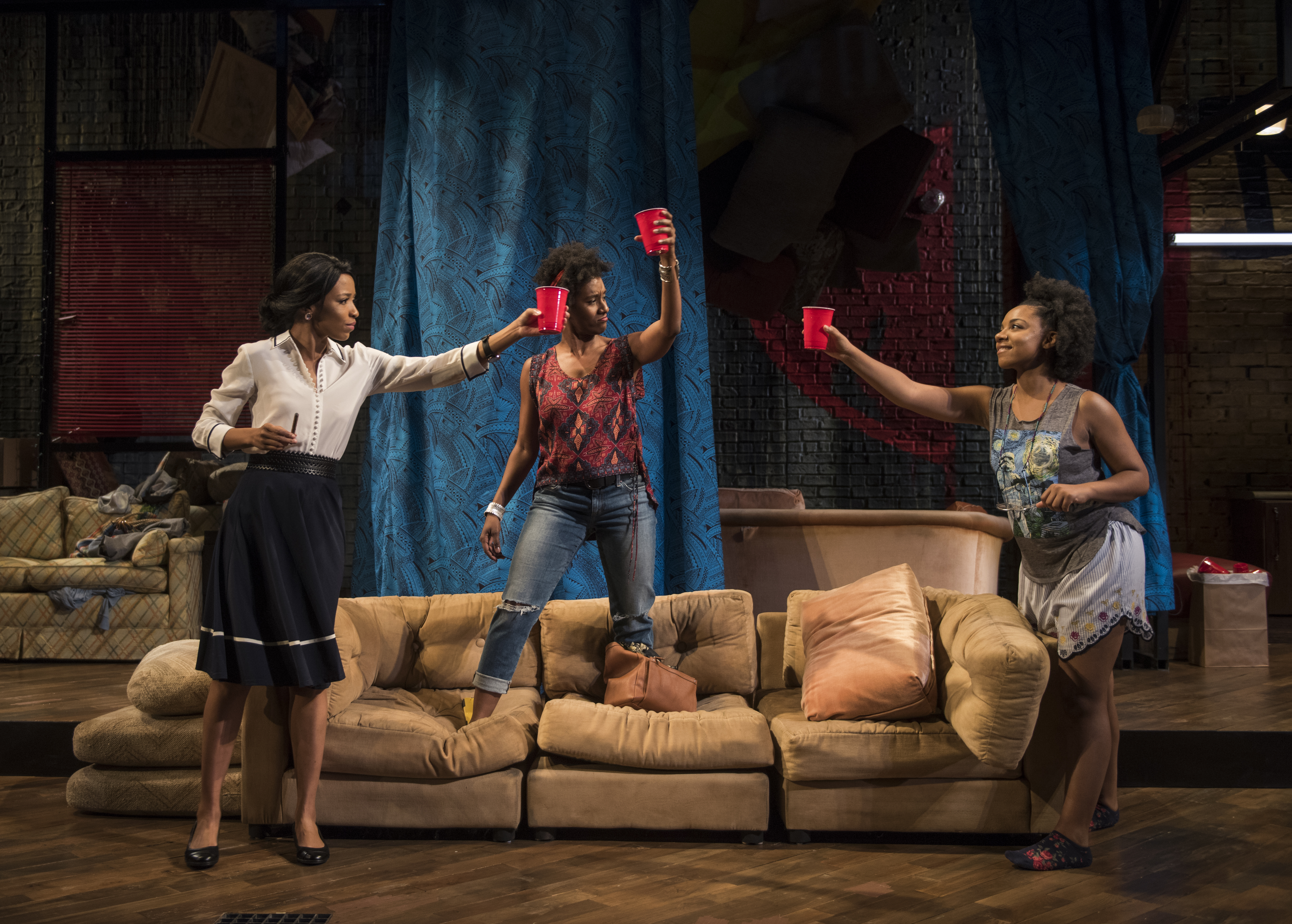 The best and most applicable piece of advice I’ve seen given both explicitly and implicitly to white people who want to better understand racism is: just shut up and listen. “BLKS,” Aziza Barnes’ brilliant new play, makes clear from the outset that it is not designed for white people. Together, Barnes and director Nataki Garrett have created a world of intersectional identities—of race, gender and sexuality but also cultural interests and emotion availability, among others—rarely seen on stages of any size. Work of this “sort” is still considered an artistic risk, one Steppenwolf has delicately offset through timing—the play opens during the holiday season and is squeezed between two mainstage shows with majority white casts prominently displaying ensemble members—and what felt like a modest marketing buildup. All of which is less of a surprise than a shame since “BLKS” could easily end up one of the high points of the 2017/18 season. It is a joyous journey with piercing insight and an essential work of art, not only for our time but for all time.

Already a lauded poet, Barnes makes the transition to playwriting with enviable ease. “BLKS” is alive with language but what is most compelling is how Barnes connects the facets of her play into an assured whole: whiplash-inducing dialogue becomes a fencing match of fiery wit, each move elegant and expertly controlled. The two acts form a rising and falling tide. Each scene comes crashing down or lapping slowly against our senses but the result is the same: the creation of an emotional buildup that is ultimately (and fittingly) anticlimactic. It is no surprise that Barnes’ characters don’t know what to do with themselves by the play’s conclusion. Like the apartment in which they live, the shores of their relationships are littered with detritus and treasure. It’s a mess, but it’s their mess, and tomorrow is another day.

Like the characters within it, “BLKS” does not live comfortably in its environment. Barnes acknowledges the demographic makeup of the theater community without capitulating to it. In a difficult but essential scene, June (Leea Ayers) is assaulted after intervening between an aggressive man (Namir Smallwood) and an intoxicated woman (Kelly O’Sullivan). After failing to stop the man and finding out that police officers in the area are all apparently already dispatched, Octavia (Nora Carroll) releases her frustration against the complacency of the unseen observers of the scene, projecting upon them a mix of indifference and discomfort that she believes is linked to their associations between black people and animals. “Seems like you just want us to twerk and die!” she screams.

That this scene takes place in front of the stage and is directed pointedly and without apology at the audience is a measure of Barnes’ and Garrett’s commitment to the political power of art. Opening night saw a degree of diversity in the seats that is irregular in the houses of our city’s most powerful theatrical institutions, yet it was nevertheless a far cry from the equitable representation that advocates are striving toward. Though Barnes’ notes in the program that the play is “by blk people and for blk people,” white audiences (this reviewer included) will and should see themselves reflected both in the various characters portrayed by O’Sullivan (an incomplete but illuminating series on the problems inherent in the term “well-meaning white person”) and, more essentially, in the white hegemonic ubiquity that surrounds the play at its edges. White privilege and supremacy is not so much seen (though there is a montage of police brutality) as it is felt throughout, a deep, powerful resonance that shakes until it shatters.

And so, for us white folk (especially the breed who make patronizing the theater a personal mission) this a privileged, though nevertheless complicated, invitation into a private world that should be treated with respect. For people of color, queer, gender non-conforming and young people, it is, one hopes, a space where they can see themselves rather than being othered. “‘Live’ and ‘belong’ are two different things,” observes Imani (Celeste M. Cooper) early on. In our community—to say nothing of our city, country and world—the discrepancy between these two is palpable and extreme. If equity is truly a priority, there has to be an understanding of the difference between being listened to and believed rather than simply seen and heard. (Kevin Greene)