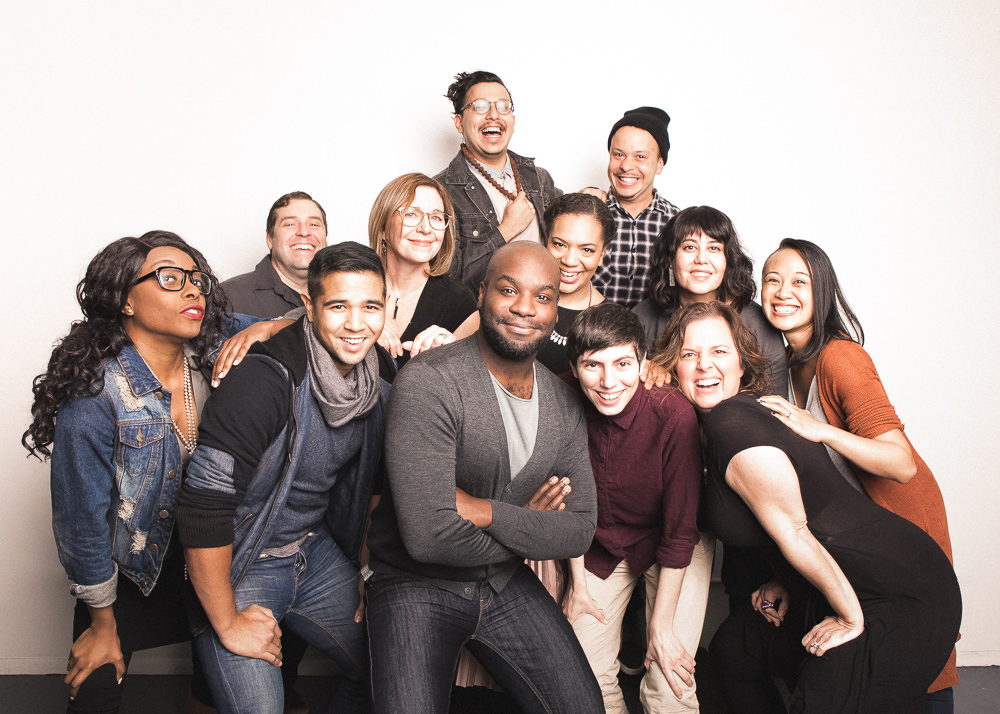 While some years have one defining “moment,” 2017 felt like a series of moments, many of which asked a great deal of our community, our city and our country. In response, this year we have widened the scope of our Players of the Moment, highlighting three organizations that reflect a growth of activism in our theater community. Their objectives include advocating for equitable representation (Chicago Inclusion Project), addressing harassment and abuse (Not In Our House) and challenging bigotry in theater criticism (The Chicago Theater Accountability Coalition). They are each uniquely situated within our city’s theater community to extend even further through this endeavor.

What made 2017 such a galvanizing year for theater activism?

Emjoy Gavino: 2017 was the year people who thought they were “doing enough” were called out on a grand scale, largely due to social media. Some of those people finally understood that while we, as an industry, have gotten slightly better in terms of representation, racism and sexism are still problems. 2017 was the year where artists, not gatekeepers, demanded action.

Chicago Theater Accountability Coalition (ChiTAC): 2017 was undeniably a huge year for activism in general. This can be linked to the current political climate and the ability to access information. In addition to those factors, activism in theater has been jump-started because of the fire that lives within most millennials. These issues being addressed with the community are not new by any means. 2017 was the resurgence of a longtime fight and this generation has taken up arms to ensure a positive future for all who create within this community, in hopes that it will create an overflow of change into the world at large.

For those less, or completely, unfamiliar with the theater community, but who have heard bits and pieces of industry-related news throughout the year, what would you like them to know about your organization?

Emjoy Gavino: The Chicago Inclusion Project operates through collaboration, action and dialogue. Too often we find that “diversity initiatives” in theaters result in discussions where everyone says they’ll do better next time, or some sort of tokenism in the season. These leaders or board members have been scared of changing the status quo or [they] do not believe that someone other than able-bodied, cis-gendered white people can be the “norm” unless otherwise noted. We were tired of other people placing barriers where there need not be. Why separate and segregate people based on race, gender identity, physical ability, economic status, when art is the one thing that can show us our shared humanity? We wanted our theater spaces to be accessible to everyone. We wanted people to feel represented in art.

Laura T. Fisher: The Chicago Theatre Standards (CTS) is a document available online. It is a free, voluntary tool for self-regulation in theater spaces that seeks to prevent and respond to harassment and abuse. There is no regulatory component. We’re not cops in our community. We want both union and non-union spaces to use the CTS to do the work in their spaces. The theaters that use the document periodically get together to report how the document is working and suggest improvements. All theaters are welcome to participate.

ChiTAC: We’re a group of people who care about people of color being treated as equals. Instead of getting used to being looked down on for the color of our skin, we made a push to stand up for each other. It’s okay for people to have different opinions but when someone tears someone down because of their race and not the content of their talent, that’s not right. If everyone is silent, nothing changes. But when we speak out about the things that affect us, the community gets better and becomes a more welcoming place for people.

One of the challenges to organizations is keeping momentum going after a major event. What are some of the strategies you employ to keep yourselves engaged? How do you stay in the public’s awareness at the breakneck speed of the news cycle?

Stephanie Diaz: Our work exists as a response to a larger paradigm, so news cycles don’t really affect us. We are always engaged and will continue to be so until there is no longer any need to challenge and change the prevalent, white-by-default model of casting that has traditionally dominated American theater and other performance-based art forms.

Lori Myers: There [has been] a steady stream throughout the past several years with folks reaching out and with that we stay fully engaged. A large portion of the work we do is behind the scenes, answering emails and having one-on-one conversations with folks across the country. We are getting more of an influx of communication now because the recent news is incredibly triggering to persons who have survived abuse.

ChiTAC: Our initial actions and movement opened up a lot of dialogue between our coalition and different institutions in Chicago theater. Many possible steps toward productive solutions were discussed and our goal now is maintaining the connection with these theaters and institutions so that we can continue working on long-term solutions to the problems we highlighted. The hope is that we don’t stay in the public’s periphery too much. If we are working toward our goals of establishing equity for all artists within the Chicago theater community, hopefully the fruits of that labor show in the increased diversity of voices and representation of perspectives on all sides.

With so much sentiment launched across party lines and with mounting pressure toward partisan unification, could you shed some light on what it’s been like to have difficult conversations with folks who are ostensibly “on your side”?

Stephanie Diaz: Very often, folks are paying lip service to inclusion and diversity but sometimes seem stuck when it comes to doing the actual work themselves or even supporting inclusive measures as they appear in action. For example: folks that habitually ask casting personnel of color to provide them, sometimes repeatedly, with actor recommendations (for free) instead of building up their own knowledge of the talent base by seeing productions featuring artist of color, varied gender expression/identity and diverse abilities. Claiming to be about inclusion but then continuing to foist the actual work of inclusion on already-marginalized populations is an unfortunately all-too-common phenomenon.

ChiTAC: We’ve talked to a lot of people in various communities across the country and have had a lot of great conversations about what it means to be an ally. There have been people of all races helping this conversation. There are also people who think that “any time liberal people have a discourse, it’s infighting.” Many well-meaning people are new to the conversation of racial injustice, but for people of color, it’s never needed an introduction. We’re well-versed in these conversations. Many people want to run and hide when the subject of race comes up in a professional setting. One of the hardest things has been seeing people admit that they have different views on who deserves equality. As hard as those conversations are, we’ve stayed calm and pushed to find common ground.

This year is likely to be turbulent. How are you preparing? What, if anything, are you anticipating?

Emjoy Gavino: We will create a safe space for reflection, provide a platform for new voices and then collaborate and create as much as humanly possible. I imagine there will be a lot more people acting out of fear and that it will be very easy to follow suit. However, we are artists. Our job is not to diminish or limit the world or perspective, it is to expand and embolden. The idea that audiences aren’t ready for unexpected casting is based in fear. The leaders upholding this idea, whether they know it or not, are operating out of fear. They feel threatened: their position, their sense of security in the industry, whatever it may be. But this isn’t a real threat. There are people in this world and country who face real threats every day. They fear for their livelihood. If we don’t begin telling different stories in different ways, we send the message to minorities that they can or should be erased from the narrative. The very least people in theater can do, as we continue our work in imagination, is to imagine ourselves into a much better place in this world than we are now.

Laura T. Fisher: We’ll get better as theater artists at protecting, mentoring, supporting and believing each other.

For more information on these organizations:
Chicago Inclusion Project, thechicagoinclusionproject.org
Not In Our House, notinourhouse.org
The Chicago Theater Accountability Coalition, chitac.org