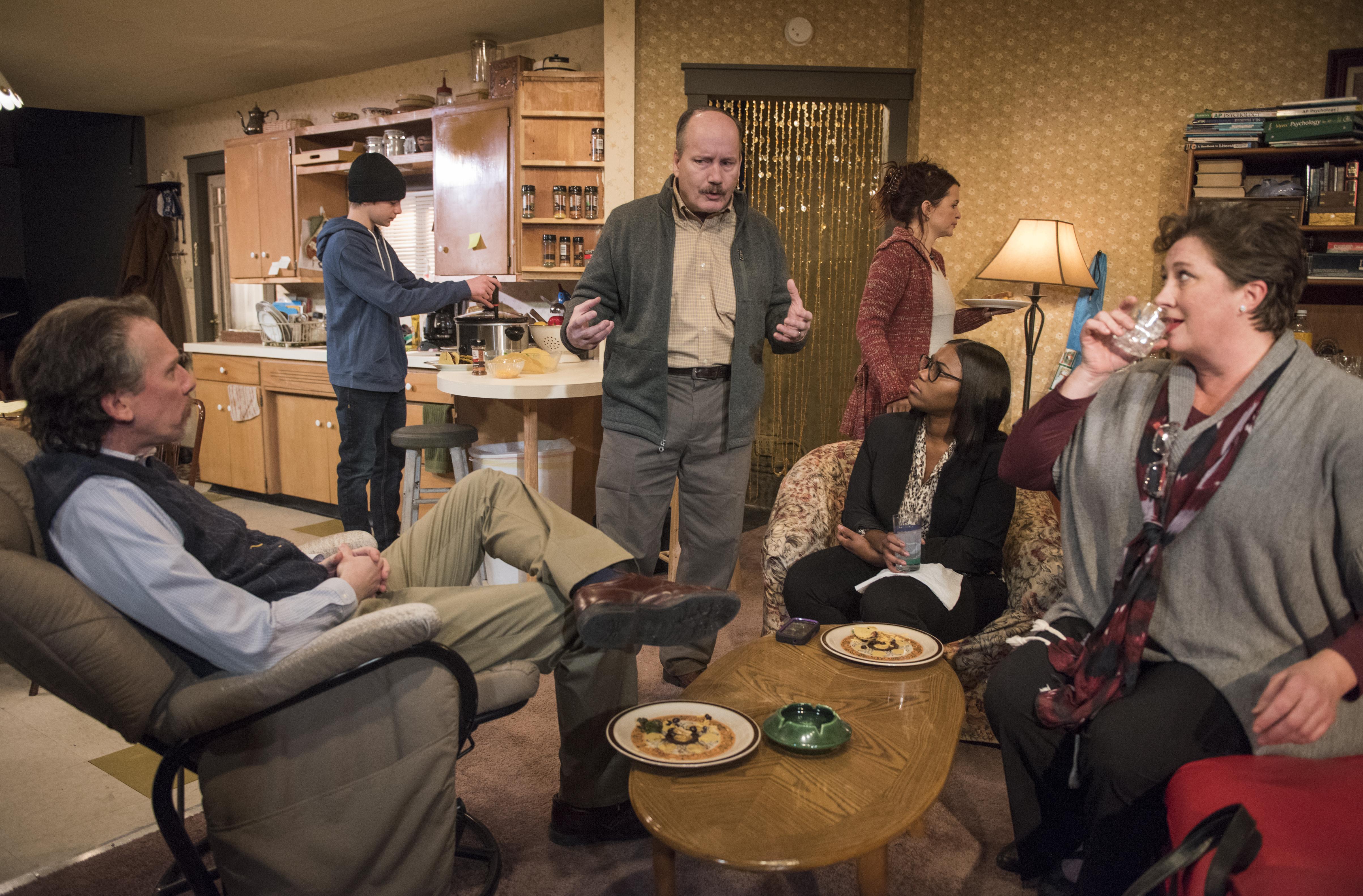 “Traitor” is a play with much to say and many voices with which to speak. Brett Neveu’s adaptation of Ibsen’s “An Enemy of the People” boasts twelve actors, an abundant ensemble for any space but especially for the narrow confines of A Red Orchid Theatre. Swapping health baths for the prickly subject of a charter school in suburban Illinois and possibly-contaminated land beneath it, Neveu clips his harness to the slippery rope of relevance. And while his play struggles, it does eventually succeed at ascending out of the political mire of our tender moment, although at the cost of identifiable intention.

“Traitor” is directed by A Red Orchid alumnus Michael Shannon, but those looking for a particularly recognizable or inspired star touch will have to seek it elsewhere. The scenes in the Stock family home move ploddingly, in part because of the physical challenge of navigating the space but also due to a lack of cohesion in performance style. Ibsen himself wasn’t sure if his play was a comedy or a drama and neither are Neveu, Shannon or the actors, it seems. While Dado and Guy Van Swearingen (as Karla Kihl-Stock and Dr. Tom Stock, respectively) perform in a state of increasing hysteria bordering on the absurd, Kirsten Fitzgerald, as Tom’s sister Patty and the town’s Mayor, offers a performance that is more pointed, deliberately funny at times and intimidatingly dramatic at others. She is a presence that shifts the mood of every scene she is in, though her fellow actors do not always take the cue. Elsewhere Natalie West delivers the comedic goods with a character straight out of the “nosy next-door neighbor” branch of central casting. That is, until she turns on Tom at Patty’s subtle suggestion, signaling an abrupt but essential shift in perspective that opens up “Traitor” to an inquisition into the character of the righteous.

A detour to a town council meeting provides an entertaining and well-timed swirl of ego and discord. It is here that Neveu diagnoses the selfish martyrdom of the Left. Tom, with a chip the size of a boulder sitting precariously on his shoulder, attempts to convince the townspeople that he, an outsider (born in town, left after graduating high school and only recently returned) and a self-identified intellectual, knows what is best for the town. As a gesture it is not so much falling on a sword as stomping on a rusty nail. By this point, the issue of the ground the school stands on has gotten wrapped into a class war against the privileged (this is one of the areas where Ibsen doesn’t make the intercontinental trek to America quite so gracefully) like a sociopolitical beef Wellington or, more appropriately, turducken.

With the exception of Karla’s father (Frank Nall), who owns the factory that may or may not have poisoned the school’s soil and, by extension, its students and faculty, no one we meet seems to possess the privilege that Tom has taken to be his mortal enemy; one-percenter elitism simply does not exist here. That absence leaves open the possibility for a conversation about the echelons of privilege, especially given the overwhelmingly homogeneous racial makeup of the ensemble and Tom’s own relatively secure position within his town and country. Unfortunately, that never happens. Privilege is simply a buzzword that Tom wields with childlike recklessness in an attempt to convince himself that he is in the right. And it seems to work, not only on himself but his family as well. Even Karla, who begins the play with a mixture of aggressive skepticism and frustrated impatience toward him, has been won over in solidarity, a particularly curious result of a selfish and ill-conceived crusade that costs the family their home and livelihoods.

It’s entirely possible that Neveu means to point out the propped-up and competitive self-righteousness that has exploded into our lives since the advent of the internet and ramped up to nuclear levels in the past two years, making public something that has been a part of our nature since long before Ibsen. However, I am not entirely convinced. “Traitor” is especially profane, written at times like a teenager using recently learned words solely to upset the more prudish. The paly blurs the line between character and authorial voice in such a way that intention seems to slip out the back door unnoticed. Perhaps that is itself an achievement, a break from the inherent partisanship that plagues the theatrical arts (a running scale from well-meaning to truly progressive) and an embrace of the possibility that people acting irresponsibly selfish can also be on the side of moral good. “Traitor” might be brilliant in thought but, in current form, lacks clear execution. What I badly wanted to know was what Neveu meant by these two-and-a-half hours of character-driven chaos. Perhaps that uncertainty is itself the point.

It is easier to read “Traitor” as an act of resistance toward the narratives of small-town America that are often told by the people who never go there, everyone from country singers and character actors to pundits and politicians. It acknowledges the desire to be heard and the pleasure of seeing our beliefs amplified when they are attached to a wider movement or cause, even if all the nuts and bolts don’t necessarily align with our individual views. It nods to small-town politics, which are trickle-down versions of congressional gridlock, and points to the ease of collusion where self-interests align. It is nothing if not a complex work, though the question of whether it is effective or not remains elusive. In its absence of enlightenment and embrace of the politics of disgrace, “Traitor” is perhaps best viewed as a work of life. (Kevin Greene)