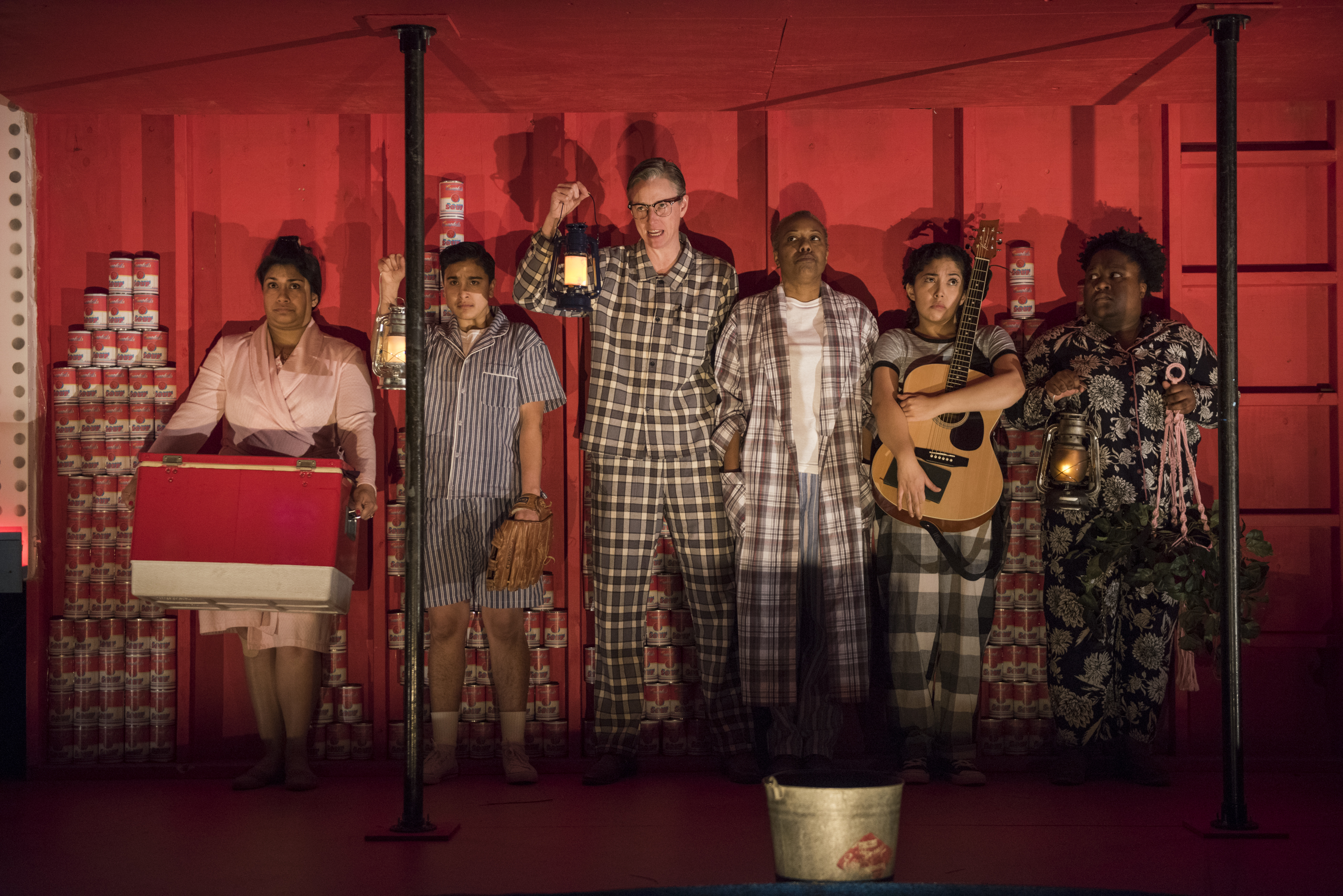 Nothing like the threat of nuclear annihilation to bring the family (and neighbors) together, right? So goes the logic at the outset of Basil Kreimendahl’s “We’re Gonna Be Okay,” receiving its mirthful local premiere at American Theater Company. As the dominant elements of American culture bake under the pressure of imminent meaninglessness, the veneer that covers this mid-century, middle-class suburban milieu, like so much Kentucky bluegrass on the plots of a gated development, begins to crack. What’s underneath is something some have always wanted and others have only feared: liberation.

In the director’s chair again, Will Davis continues queering the hell out of American archetypes and narratives to consistently revelatory results. Working alongside longtime friend Kreimendahl, Davis’ emotional connection to the piece is as easy to perceive as his directorial touches (opening night found him cackling away in the audience). More spatially limited than his previous efforts with ATC—although well worth it as William Boles’ versatile set and Jamie Karas’ period perfect props contributed to one of the great visual gags of the evening—Davis’ focus is on getting the most pitch-perfect performances out of his abundantly talented ensemble.

Set up to succeed with casting from the indispensable Chicago Inclusion Project,  Davis knocks it out of the park, from Avi Roque’s portrayal of the conflicted masculinity in a teenage boy obsessed with the biological imperative of procreation, to Adithi Chandrashekar’s sharp-tongued housewife who reads her husband like an issue of Life magazine. BrittneyLove Smith brings the quiet longing for a life out loud while Penelope Walker’s monosyllabic handyman is straight out of an alternate queer-universe “King of the Hill.” The showstopper is Kelli Simpkins, as an affable but domineering apocalypse obsessive. Simpkins can get an audience roiling with laughter from a mere gesture and her performance here is worth the price of admission and then some. Despite opening on the same night as “Blind Date,” the Goodman’s Reagan/Gorbachev bromance, this production should be as popular as Walmart on judgement day.

“We’re Gonna Be Okay” is not simply one of the funniest shows you’re likely to see this year, it is also one of the most joyous. Casting female- and trans-identified actors as well as actors of color into plays about heteronormative whiteness is not so much an act of reclamation as a declaration of inclusion by sheer force of will. America—even its stages—does not make room for these stories, so artists like Kreimendahl, Davis and this cast carve them out of the theatrical soil. The process is surely no picnic but the rewards are manifold for the artists and audiences alike.

If your heart does not melt watching Roque and Sarai Rodriguez jumping up and down exclaiming “You’re weird!” as the realities of the vast possibilities of their characters’ queerness begin to dawn then there are, in fact, many other places for you to go. But in just over a year, Davis has established ATC as a home for the weird and the weary, longing to be seen, heard and recognized. The effort, made possible by the collective exertion of so many, has not gone unnoticed or unappreciated.

So come on in. There’s plenty of Campbell’s for everyone. (Kevin Greene)