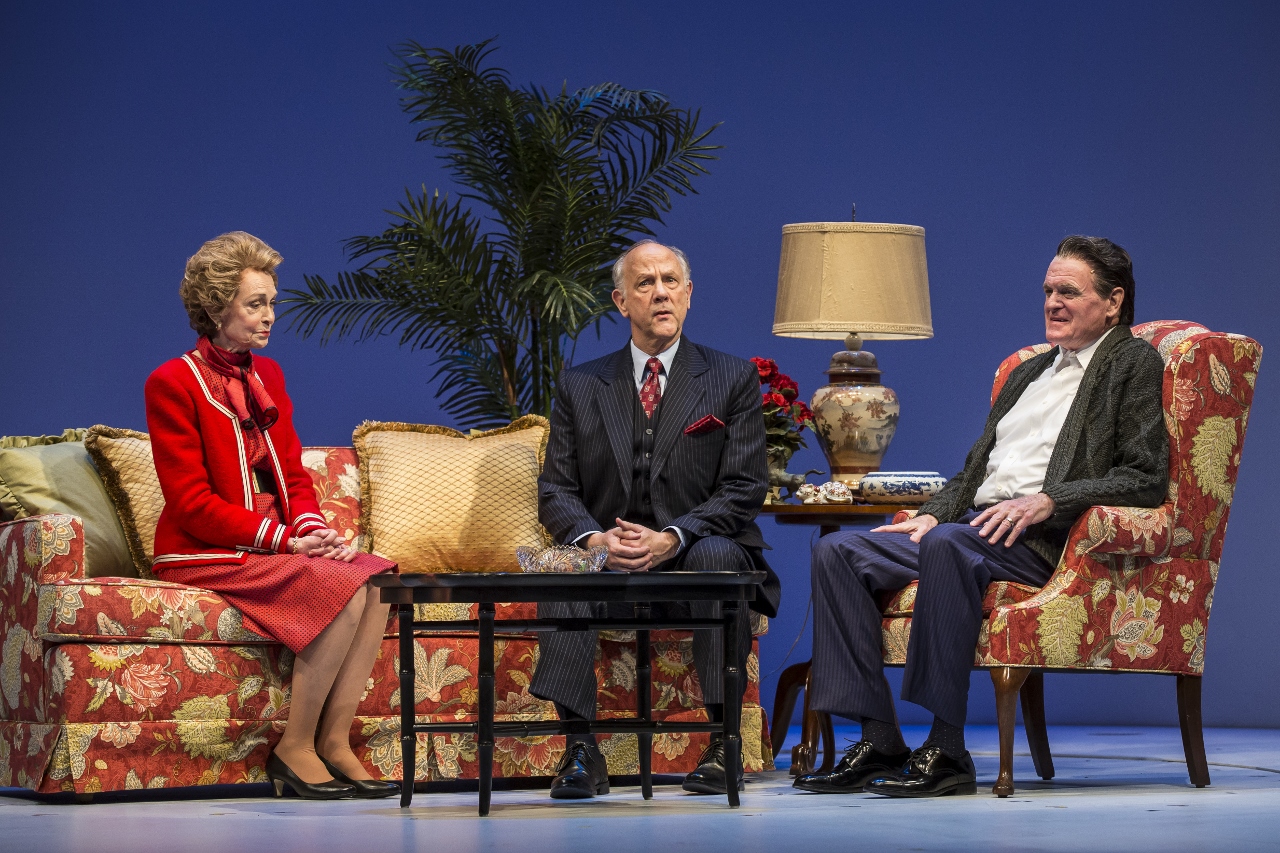 A towering missile silo dominates the set of Goodman’s “Blind Date,” Rogelio Martinez’s look at the 1985 Geneva summit conference featuring Ronald Reagan and Mikhail Gorbachev. The coolly sinister form, designed by Riccardo Hernandez, is an emblem of the Cold War, representing the balance of terror between two nuclear-armed rivals. The cylinder rotates periodically, opening upon human spaces—offices, parlors, bedrooms—where positions are debated and decisions made.

It’s a clever idea, this literal peering inside nuclear machinery to see what makes it tick. Stanley Kubrick did this in “Dr. Strangelove,” with its unsavory blend of paranoia, pomposity, sexual perversity and death wish, simultaneously terrifying and hilarious.

But Martinez is no Kubrick and his historical excavation here turns up only commonplaces: that superpower supremos, whatever their godlike destructive capabilities, have feet of clay, and that diplomacy, whatever the stakes involved, is a form of theater. “Fashion is politics,” declares a character and this sentiment drives the play, as matters of style and self-presentation preoccupy not just the American first couple, both former B-list movie actors but also increasingly the youthful and high-minded Soviet general secretary and his philosopher wife, Raisa (Mary Beth Fisher, in a sharp-edged portrayal).

Director Robert Falls and his large, stalwart cast do their best to energize Martinez’s plodding script but they cannot overcome relentless stiffness and triviality. An overlong introductory scene signals trouble ahead, as American Secretary of State George Shultz (Jim Ortlieb) and Soviet Foreign Affairs Minister Eduard Shevardnadze (Steve Pickering) mull over the question of forks versus fingers when eating shrimp cocktail and discuss why Shultz has a Princeton Tigers tattoo on his cabinet-level rump.

The “Seinfeld”-type routines continue in the shadow of nuclear Armageddon, which might have produced a surreal or at least satirical effect if the show had intellectual or artistic ambitions. It does not. There’s occasional insight, but what the play mostly peddles—as did Reagan—is sentimental and dangerous reassurance that those who control the planet’s fate are just regular folks who have the best interests of all of us at heart.

The one reason to see this play is Deanna Dunagan’s inspired impersonation of Nancy Reagan, which captures her air of subtle, spacey ruthlessness. Rob Riley is less satisfying as her husband, playing our first entertainer-president with a frozen Dick Tracy grimace and a hint of creeping senescence. William Dick is sympathetic as Gorbachev, the European intellectual who, faced with a counterpart who communicates through old movie clichés, goes a bit showbiz himself. Thomas J. Cox dithers in the superfluous role of Edmund Morris, the Nancy-authorized Reagan biographer who found his subject so incapable of self-reflection that he ended up inserting himself into key scenes in the president-to-be’s past, just to give the episodes a hint of life.

Which is what this play sorely needs, as well as a point of view. There are too many narrators, with at least five characters dispensing asides directly to the audience. In the end, it’s hard to say exactly what this unfocused, noncommittal, vaguely comedic history piece is really about: The Geneva summit, which produced more human-interest stories for the media than actual agreements? The personality of Ronald Reagan, the self-proclaimed “pitchman for democracy” who could label the Soviet Union an evil empire one day and a partner for peace the next, depending upon which script he’d been handed? The contrast between then and now, with the avuncular reactionary Reagan treated as an anti-Trump rather than a proto-Trump? Or perhaps the key role of behind-the-scenes bureaucrats like Shultz and Shevardnadze in keeping the ship of state on course, despite what Shevardnadze calls “democracy’s greatest flaw: stupid people”?

What would strengthen and deepen this play is some suggestion of the masses of people, stupid or no, who serve as permanent hostages to the whims and intrigues of Pentagon and Kremlin elites. As it is, despite the looming missile silo on stage, the obscene reality of Mutual Assured Destruction and Launch on Warning remains remote and abstract, the province of sometimes bumbling but ultimately well-meaning rulers.

Leaving the theater and its bejeweled opening-night crowd on this cold night, I passed a homeless person relieving herself on the Loop sidewalk before retiring to her doorway boudoir. It was a pointed if unwitting comment on the longterm human and social costs of unrestrained militarism, more truthful than anything said or done on stage. (Hugh Iglarsh)