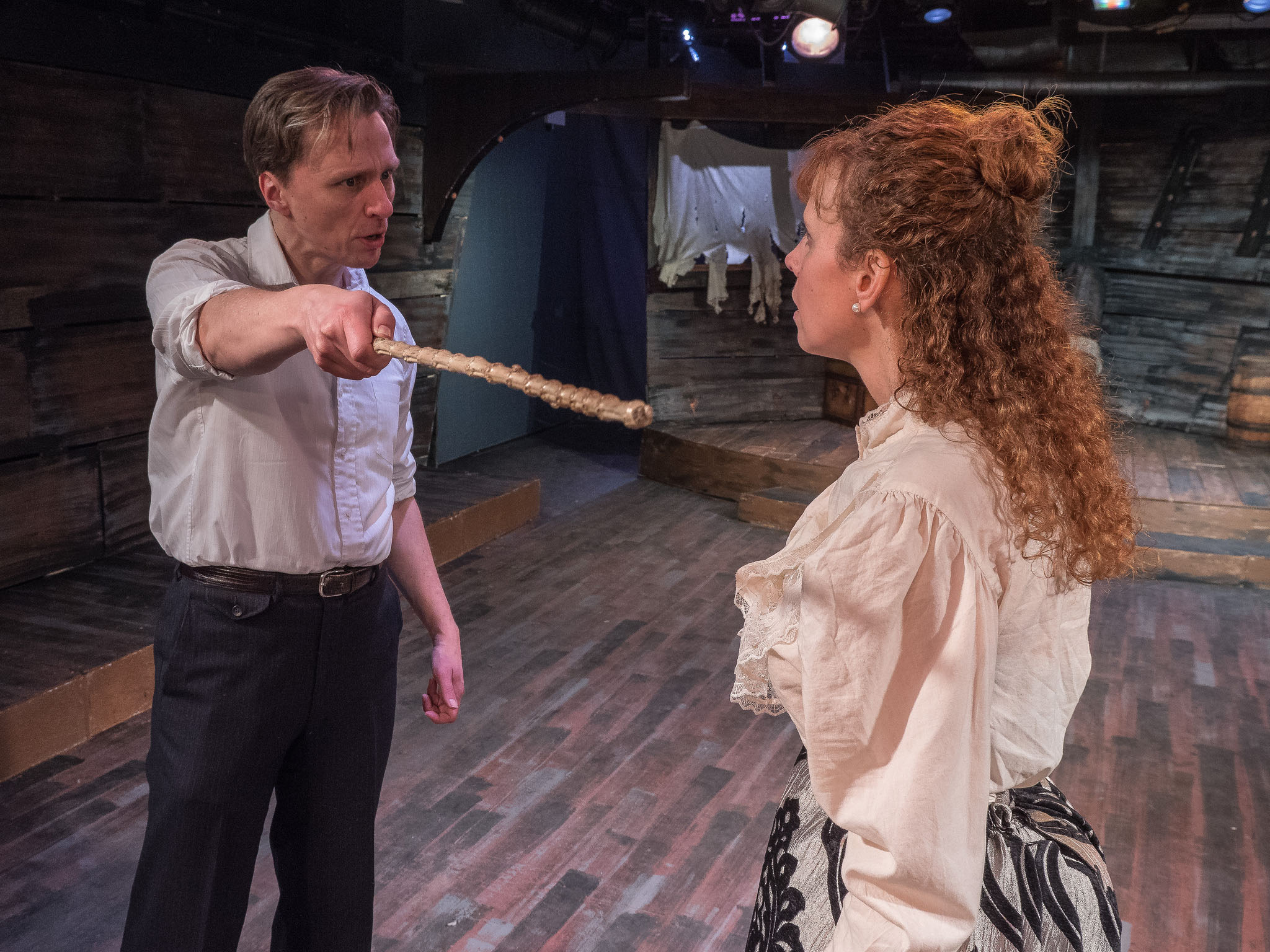 “Pillars of the Community,” Henrik Ibsen’s masterful demolition job on middle-class moralism, takes place in a Norwegian equivalent of River City in “The Music Man,” an overgrown village that hangs on tight to its claustrophobic provincialism. The town fathers—the pillars of the title—even once blocked the construction of a railway on the (ostensible) grounds that it would only bring “improved access to the depraved modern world.” True, there was that sex scandal years ago and maybe some related financial shenanigans too, but the (supposed) perpetrator and his similarly tainted half-sister skipped town afterward. The story is now just a bit of malicious gossip for the good ladies who, under the guidance of the schoolmaster, sew prim bonnets for their “morally wounded” sisters. In short, everything is shipshape in the little port city, until a vessel from America docks and the two prodigals return, bearing their own version of the events, a tale that, if believed, could reduce the main pillar and his seemingly benevolent authority to rubble.

All the conventions of Victorian melodrama—carefully spaced revelations, last-minute rescues, sudden plot reversals, charged moments of fall and redemption—are present in this 1877 play, but somehow the playwright transforms these musty clichés into painful, audience-challenging truths. Writing in a minor language from the boondocks of Europe, Ibsen became the father of modern theater because he was the first to realize that the forces transforming nineteenth-century society—technology, women’s emancipation, class conflict, emigration—could and should serve as the raw materials of drama. His realist works are about history, about the process of change, and a historically sensitive interpretation is needed to communicate his sweeping, still-potent vision.

Unfortunately, Strawdog’s production, which takes place in the troupe’s new space under the direction of Elly Green, lacks the historical and dramaturgical foundation that would make the play fully meaningful and edifying to a contemporary audience. While to some extent we still live in the world seen taking shape here, twenty-first-century Chicago is not the same as nineteenth-century Norway, and some assistance is needed to understand the similarities and differences as well as to grasp the convoluted back-story that ties together the play’s dozen or so significant characters. Green could do more to slow down and focus the early, crucial exposition scene, which comes at us before we’ve really met Karsten, the shipyard owner and town worthy who is the play’s compromised protagonist. He is the man who has the most to lose when his sister-in-law Lona (Allison Latta), a firebrand early feminist, and brother-in-law and former friend Johan (Kroydell Galima), the half-siblings who fled to America years earlier, return to the place that unjustly exiled them.

The show is further hobbled by miscasting and amateurish execution. With the glowing exceptions of Gage Wallace as the sanctimonious schoolmaster afraid to make public his love for the orphaned Dina (Kamille Dawkins), Michaela Petro as a tattletale townie and Robert Koon as Karsten’s put-upon workman, the actors often fail to find the details of speech, gesture and movement that make for a convincing and distinctive characterization. John Henry Roberts as Karsten has half of his part down pat—the nervous tension of a guilty conscience—but lacks the balancing gravitas of a respected local dignitary. His neglected wife, whom he married for her money, is played by Nicole Bloomsmith.

John Wilson’s set, a ship’s hold containing both stage and seats, is ingenious, and John Kelly’s lighting design is subtly expressive. However, Uriel Gomez’s costumes, a key element in any historical drama, are disappointing, with Karsten in eighties high-yuppie garb, while other characters are more period-appropriate but short on panache.

For all its issues in terms of acting and look, the production still manages to pack a punch, thanks to the underlying strength of Ibsen’s story. There’s nothing dated about Karsten’s double-bind situation: that to protect his public honor, he must live a private lie. As Ibsen’s bourgeois hero finally comes to understand, he can be a pillar of rigid order and smothering idealism or an authentic, feeling, flawed human being, but he cannot be both. (Hugh Iglarsh)