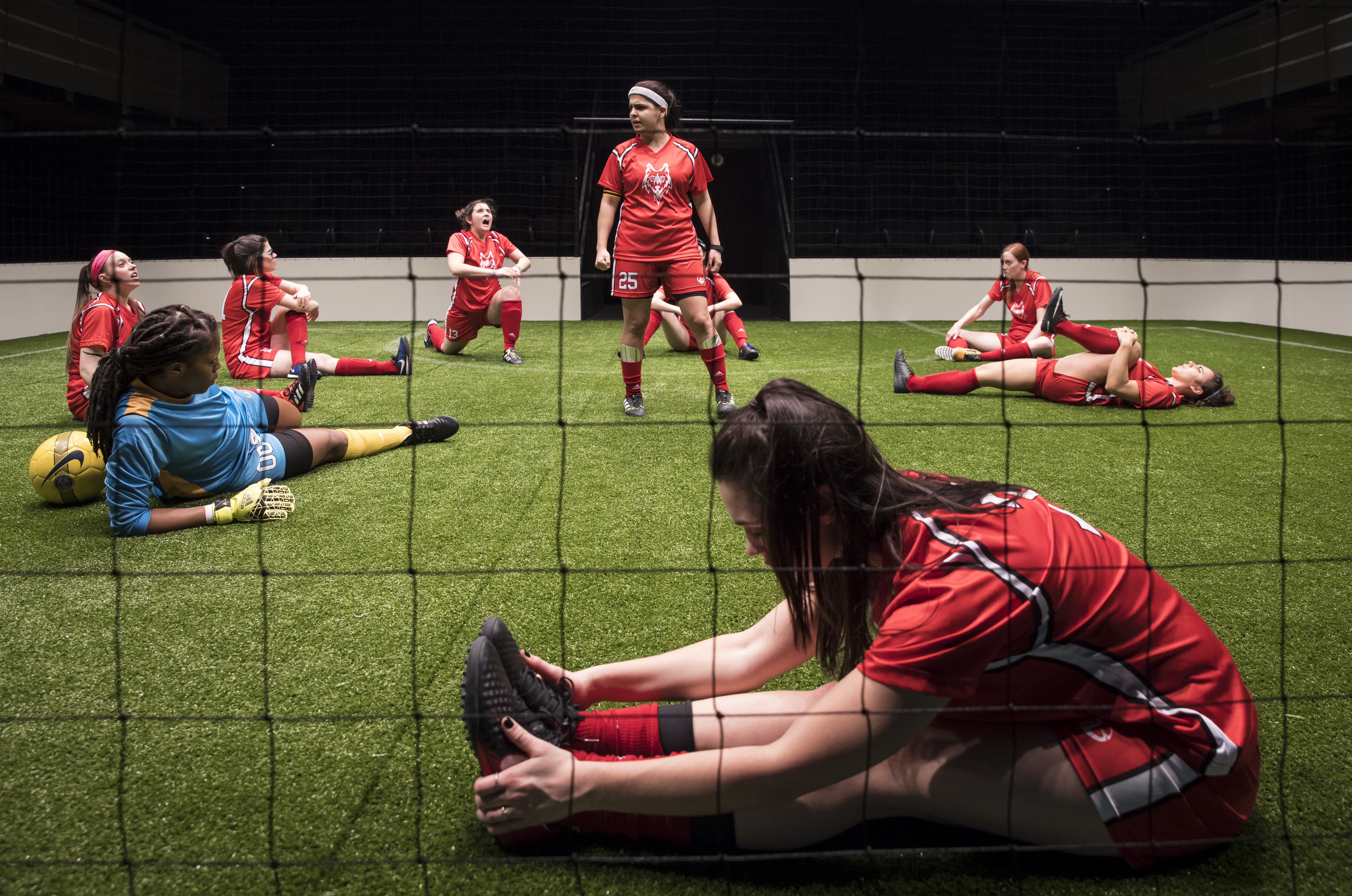 The first impression is liable to leave you a little breathless, like stepping into the rarefied air of a stadium or arena. The Goodman’s Owen Theatre, normally set in three-quarter thrust, is not only configured in the round but has also been transformed into a tennis-ball-green soccer pitch, surrounded on all sides by ceiling-high netting, lit like a microscope slide by designer Keith Parham, under which we witness this essential drama play out. Nine women, young themselves and playing even younger, take to the field in a flurry of hoots and hollers to an electrifying soundtrack (courtesy Mikhail Fiksel). They stretch, run drills and talk. They quibble, quarrel and get psyched up. They are here to play, but more importantly, they are here to win. The former they do alone while the latter can only be accomplished together. The women are identified only by the number on their jersey but in playwright Sarah DeLappe’s observational, empathetic and even-handed approach, they are each full and clear characters, often achingly so.

DeLappe is astute in her portrayal of the rhythms of speech and the attentions of young people. What could have easily been another in a long line of patronizing attempts to translate the wants and desires of a demographic that is rightly disinterested in explaining themselves to a generation that is desperate (sometimes aggressively so) to understand why they do what they do, “The Wolves” instead offers the opportunity for audiences to watch and listen, learning the old-fashioned way by exercising some degree of interest in their subjects rather than being told how to feel about them. There is no manifesto or even consensus here, as these young women discuss mass atrocities alongside periods, family, sex, ethics, and, of course, soccer. Save for the play’s final moments, there is not an adult to be found. In this sanctified space DeLappe allows us to enter unobtrusively as witnesses to the complexity of being a young woman in a country and world that sometimes barely tolerates their existence.

Guided by director Vanessa Stalling, a brilliant fit given both her movement-based aesthetic and interest in telling the stories of women in new and intriguing ways, each member of the ensemble is singularly gifted. Some are cresting toward a point in their careers where stages like the Goodman will become regular realities. Others will be worth seeking out wherever they perform. Not a single one is underused or written off. Angela Alise’s silent, anxiety-ridden goalie has one of the show’s most emotionally powerful moments. Isa Arciniegas is stoic and sweet as the team captain who is on the threshold of sexual self-discovery. Taylor Blim carries her character’s secrets with hidden strength. Mary Tilden’s loud personality and inimitable comic delivery is worth the entirety of your attention. She will remind you of the deeper purpose of the class clown.

Often set in opposition, in a constantly shifting polygon of pettiness and loyalty, the women are best defined by their relationship to the unit and each other. Natalie Joyce plays the team’s foul-mouthed star, who gets eclipsed by Erin O’Shea’s deceptively awkward new girl and in the process alienates her closest friend, played with authentic vulnerability by Aurora Real De Asua. Both Sarah Price and Cydney Moody find themselves alternately in and out of the group’s good graces, the former a know-it-all and the latter her exact opposite, earnest in her lack of worldliness, a quintessential middle American teenager devastated by the news that their season will conclude not in Miami but in Tulsa.

The social dynamic of “The Wolves” is somewhere between a game of king of the hill and musical chairs: each woman fights to stay inside a group that is constantly trying to purge her. All words and actions are deeply scrutinized and “different” is dangerous yet also intriguing. Not despite but because of its divisions of talent, social status, sexual experience, academic aptitude, familial structure, and more, “The Wolves” is a play about unity. It is positively thrilling to see young women speaking to each other without the presence of adults or, more vitally, men. It is not so much that they are not performing but that their performances are more affecting and meaningful when done exclusively for each other. DeLappe’s play does not seek to correct cultural perceptions of women but to deepen our understanding of those perceptions by acknowledging the effect they have on individual self-esteem and awareness. In presenting her subjects neutrally and without judgement, DeLappe spurs the audience to contend with why so much of female existence has been vilified and what our individual roles have been in reinforcing those negative norms.

What “The Wolves” offers is rare when it comes to media, even theater, a medium that prides itself on depth and honesty but struggles in a major way with a lack of representation in enormous fields of identity. If theater’s main priority is to show the complexities of male middle-aged whiteness (and The Goodman is as unequivocally guilty in this respect as they are in very good company) than plays like “The Wolves,” an invigorating sign of a potential future for the stage and beyond, will continue to feel more like visions from an alternate universe of parity and actual commitment, rather than mere lip service, to the value of representation. There are champions in our midst but it won’t matter if we do not give them a chance to play. (Kevin Greene)