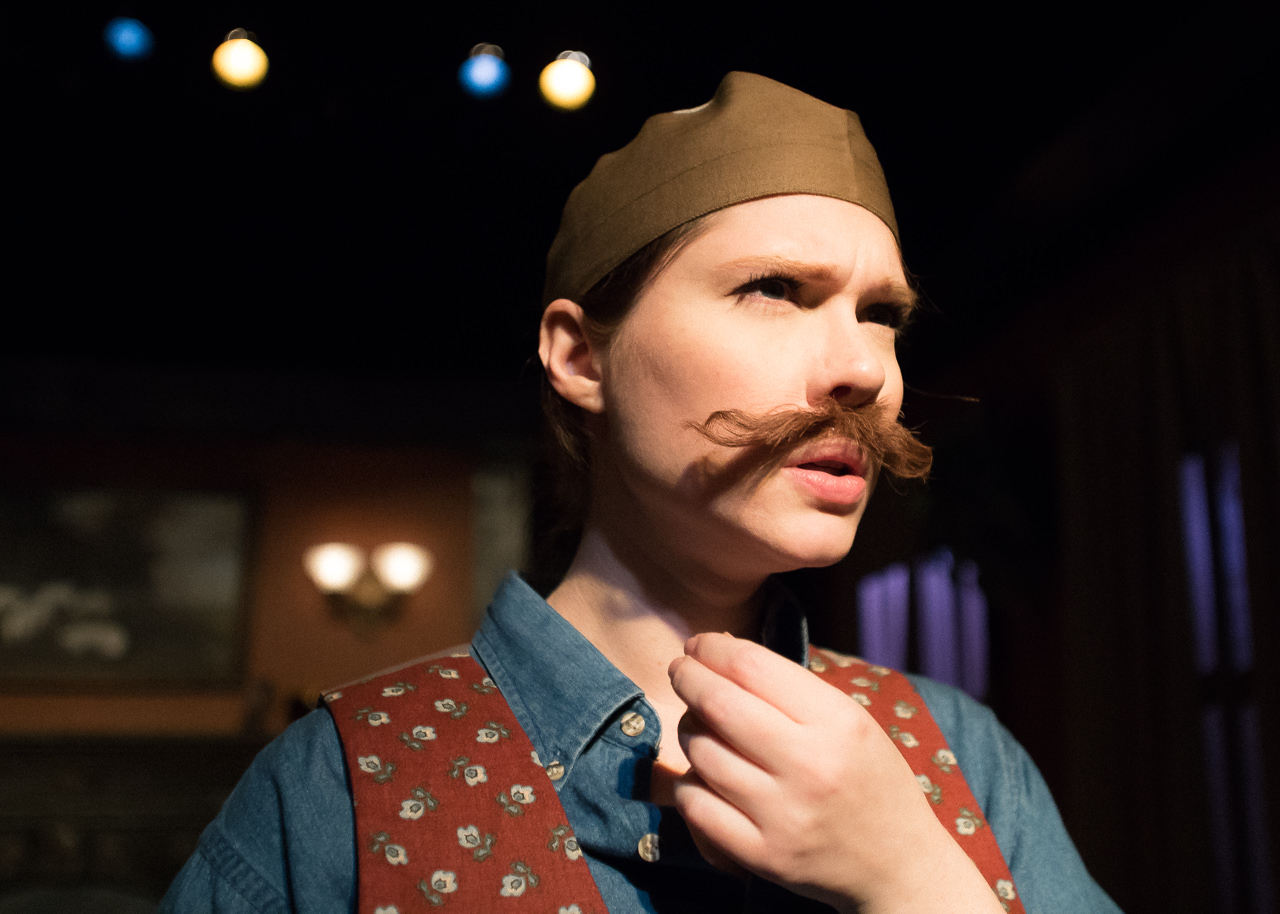 “Some Like It Red” is the cutest play we’re likely to see about Albania during the final days of Communist dictator Enver Hoxha, who for decades ruled his Balkan mini-state like Stalin on steroids. Whisking together motifs from Shakespeare’s gender-playful “Twelfth Night” (featuring girl as boy) and Billy Wilder’s beloved 1959 drag comedy “Some Like It Hot” (two boys as girls) and even tossing in a dollop or two of mid-eighties pop tunes and Cold War-era paranoid politics, the Plagiarists serve up the most delicate of theatrical soufflés. Fast-moving, broadly played and unapologetically goofy, “Red” is a hoot. Its silliness—like the shenanigans of Toby Belch and Andrew Aguecheek in “Twelfth Night”—is the sugar coating on top of a trenchant and relevant critique of toxic ambition, self-righteousness and sadism pretending to virtue and duty.

Playwright Gregory Peters, the company’s artistic director, wields a light but sharp pen, hoisting the Albanian secret service officer who is the piece’s Malvolio-like villain on his own pompously cruel petard. Peters reveals himself as a dramatist to watch, skillfully managing the politically and sexually tangled connections among the work’s ten characters, while director Jack Dugan Carpenter consistently maintains a tone of arch, clowning artifice without overdoing the camp.

The story centers on a trio of on-the-lam musicians, not unlike the jazz musicians played by Tony Curtis and Jack Lemmon in “Some Like It Hot.” As the curtain rises, cruise-ship performers Violet, Rose and Daisy are caught in a storm and find themselves marooned on the coast of Albania, the modern name for “Twelfth Night”’s Illyria. On shore, they encounter Albanian justice in action, as the gangsterish Commander Osmani of the dreaded Sigurimi intelligence service guns down an agent provocateur whom Osmani himself had assigned to entrap potential rebels. The three are rescued by Petar, the dictator’s surgically-altered lookalike. A privileged prisoner, Petar refers to himself as Hoxha’s double rather than decoy because “it sounds less assassinated.”

From there, things get really knotty, as Hoxha’s niece Majlinda (Julia Stemper), mourning her recently liquidated kinfolk, and her no-nonsense nurse (Elaine Small) arrive at Petar’s estate. There they are joined by a security detail consisting of the heinous Osmani, who aims to wed Majlinda; his hero-worshiping underling Malush (Stephen McClure); and a good-hearted but gormless soldier, Meksi (Bryan Breau). To put Osmani off their trail, the three chorus girls disguise themselves as Petar’s male servants; fortunately for them, everyone in Albania speaks perfect Midwestern-accented English. The unlikely plot developments rain down fast and furious: “It sounds like the setup for a farce,” comments Petar in one of several nice Brechtian moments.

Taut, swivel-eyed Jessica Saxvik shines as the Viola-like Violet, trying to remain sane and safe in the demented and dangerous world of Hoxha’s Albania, and Sara Jean McCarthy is winning as Daisy, whose impish anarchy owes much to Harpo Marx. Christina Casano as the impulsive Rose makes a suavely good-looking guy, but her character never jells. Tony Kaehny commands the stage as Osmani, the torture-loving, browbeating Dick Cheney type, while Derik Marcussen’s smooth-but-tough Petar floats through his scenes with a Jeeves-like imperturbability.

Cheesy, well-chosen eighties music—such as Osmani’s theme song, The Police’s “I’ll Be Watching You”—is the food of love for the lonely characters in this inspired pastiche, and I hope this talented and literate troupe plays on. “There is no hell, only Albania,” declares a frazzled citizen of the atheistic worker’s paradise. This show captures the hellishness of a xenophobic, militarized surveillance state run by a lunatic—a situation not limited to twentieth-century Albania—and transmutes it into absurd, subversive delight. (Hugh Iglarsh)