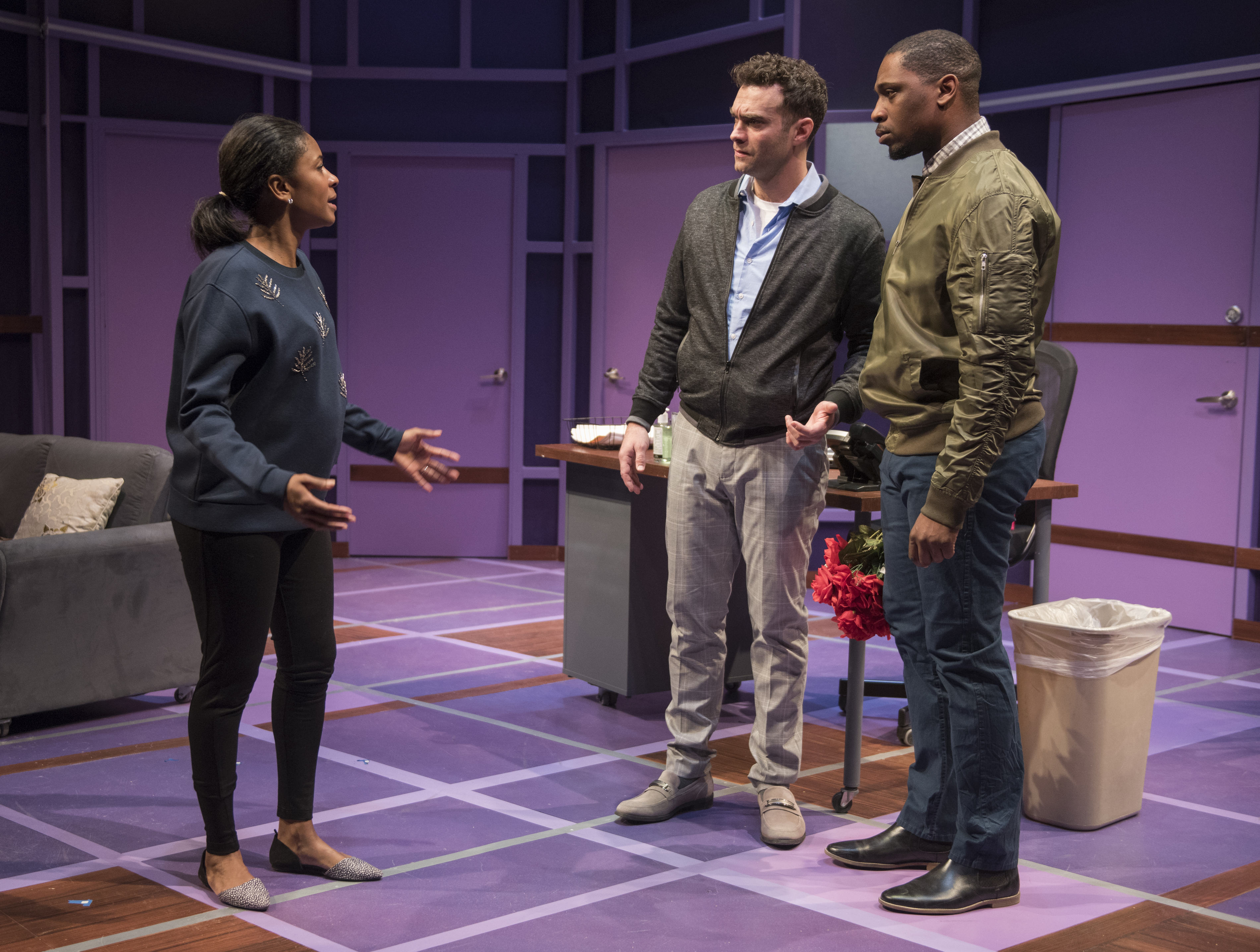 The title of Antoinette Nwandu’s new play is a mouthful. Falling somewhere between “For Colored Girls” and “Angels in America,” there’s a joke in this self-serious title that audiences won’t get until nearly the end of the play, although whether it will affect your relationship with the work at hand is iffy. “Breach” is a comedy in tone, but actually finding it funny will depend largely on your taste for nineties sitcom humor, verbal slapstick and moral heavy-handedness.

“Breach” may claim to be a “love letter to black women” but how it feels about women of color in general is less benevolent. Karen Rodriguez’s Carolina is a parade of narrow stereotypes of Latinx women. Relentlessly cheery and forcibly likable even when she is coercing another character into doing her job for her, Carolina is also a conduit for the kind of questionable relationship wisdom that this play dispenses with freely. “Breach” is fixated not only on heteronormativity but on the institutions of marriage and the symbolic value of pregnancy. Perhaps most troubling of all is how Nwandu attempts, unsuccessfully, to contort each into the shape of modern feminism. In “Breach,” being a woman entails not only having children but fitting men into the equation. Social realities aside (the play seems unconcerned with them so why should we be?), the moral here is as distressingly backwards as the logic.

There are points of interest in Nwandu’s abundantly contradictory play. While Margaret (Caren Blackmore) grapples with her relationships to two equally pitiful men—one who has turned his life around after being incarcerated at a young age, the other a hot shot in finance—she also grapples with her family history: an absent father, an overextended mother and a great aunt who apparently did much of the heavy lifting in terms of imparting values. And while Linda Bright Clay’s Aunt Sylvia is built flimsily out of auntie memes, when Nwandu scratches away at what she represents to Margaret the play ventures, however briefly, into interesting racial and cultural territory.

“Breach” and “Pass Over” both explore the semantic maze of the N-word, specifically how it is used between black people. For Margaret, the word has negative connotations, suggesting less a belief in respectability politics (she doesn’t use it in front of her white boyfriend but since their entire relationship is a performance, both for each other and for the audience, that really doesn’t mean much) than an acknowledgement of the personal history that drives her behavior. She uses the word to undermine the inspirational rhetoric of her boss (Al’Jaleel McGhee), to talk about the father whose presence she desperately wanted during her formative years, and to call out the behavior of Aunt Sylvia, who is the last vestige of an upbringing she is trying to escape through money, sex and work.

The romance in “Breach” is as disheartening as the comedy, simultaneously both cynical and normalizing. Margaret is the prize of her boyfriend Nate (Keith D. Gallagher) and neither even tries to pretend otherwise. McGhee’s Rasheed is meant to contrast Nate’s relentless pursuit of the empty promise of affluence but he is little more than an emotional pushover and a “nice guy,” a trope that is becoming dangerously overplayed the further our culture digs into the internalized entitlements of men. In a scene where her aunt tries to push an increasingly independence-minded Margaret toward Rasheed, Sylvia defends him by asserting that she can tell he isn’t a man like Margaret’s father. Yet when Nate and Rasheed are pitted against each other (after one of the least romantic marriage proposals in the history of fiction), he proves himself to be just as capable of the kind of possessive toxic masculinity that Nate demonstrates openly. Margaret’s ultimate decision to co-parent with Rasheed feels like the least worst option though the best choice would have been to encourage both of these man-children to get into therapy and to never see either of them again.

Obviously fiction is not built on characters making purely rational decisions, but so much of what happens in “Breach” feels unmotivated, illogical or downright random. The world of this play lacks internal logic. It feels like Nwandu, following Tanya Saracho’s lead from earlier this season, is angling for a television gig, a medium whose heartless humor and easy sentimentality is aided by closeups, smooth editing and constant musical underscoring. Even the performances (Rodriguez and Clay are particularly excellent even with the limitations of their characters) would have been better suited to television, where larger-than-life characters (i.e. single character traits inflated to the size of an actual character) are countenanced more easily against rapid shifts toward morality.

It would be the height of snobbishness to suggest that for some reason theater, more so than other media, deserves better than caricature and unearned emotions. All writers, regardless of their form, should strive to do better. Furthermore, it is not the responsibility of Nwandu, or any women playwrights or playwrights of color, to only write plays like “Pass Over,” though we should not forget that part of that play’s dramatic power and emotional heft came from its humorous juxtapositions, which slipped brilliantly in and out of irony. Drama is not the absence of humor and comedy is not the absence of seriousness. Both are strengthened when the two poles of our experiences tussle together. In “Breach” they are merely set in opposition, staring at each other across the fertile space between. (Kevin Greene)