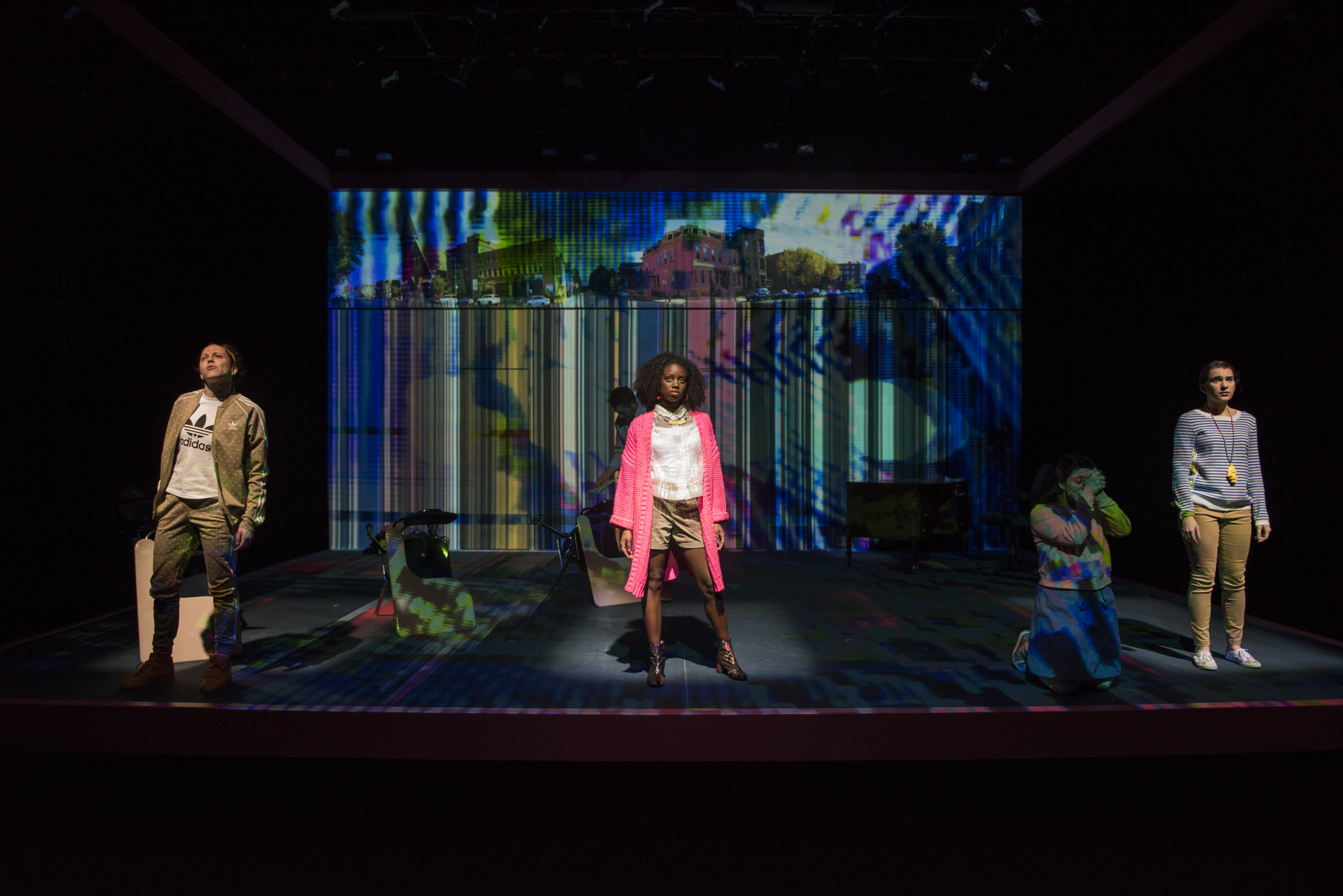 On numerous occasions during the world premiere of Philip Dawkins’ “The Burn,” I found myself wishing the playwright engaged as seriously with the real lives of adolescents as he does with the text of “The Crucible.” Arthur Miller’s play is the jumping off point for Dawkins to explore victimhood and bullying in a Chicago public high school, subjects of urgent necessity but also serious delicacy. And while Miller’s work is treated with utmost sanctity (the allusions and parallels suggest Dawkins has spent a great deal of time thinking about the play), the same cannot be said of the teens in this new play.

While part of “The Burn” takes place within the landscape of social media (rendered energetically by director Devon de Mayo and projection designer Rasean Davonte Johnson), some of the dialogue feels aimed directly at an older audience and their preconceived notions of the vacuous vanities of youth. Young people already have to contend with these assumptions enough as it is and have so few opportunities to see themselves reflected honestly on stage that these cheap shots feel cruel, like being invited to the party only to be shamed for what you wore. Showing young people as they are in all their complications and contradictions while not treating their lives as punchlines for middle-aged theatergoers is not a difficult needle to thread and it’s disappointing to see Steppenwolf for Young Adults profit from and reinforce negative stereotypes of the very people their organization claims to represent.

“The Burn” is best when splitting the difference between its tendencies to be an urban, internet-saturated “Mean Girls” reboot and a school-assembly-ready presentation on wokeness. Still, it can be hard to parse how the playwright actually feels about young people. For instance, Erik Hellman’s drama teacher (also conveniently named Erik) seems fairly comfortable both in picking favorites and crossing ethical boundaries (the idea that he would force a student to give up basketball, the sport that will help her get into college, is an enormous violation that never gets explored). He openly voices his disdain for the trio of girls who terrorize his star pupil, Mercedes (Phoebe Gonzalez), a religious zealot who does not see a distinction between herself and her belief system. That neither of them grapple with the part she plays in her ostracizing suggests that this is where Dawkins’ own sympathies lie as well.

Of the three so-called mean girls, Shauna (Dyllan Rodrigues-Miller) breaks from the fold, though in developing a conscience she also excuses her own past behavior. Andi (Nina Ganet) is perhaps the saddest of the three, a parrot mimicking the vitriol of the group’s leader, Tara (Birgundi Baker), who thrillingly demonstrates her intelligence to the patronizing Erik, though her selfishness and failure to understand the hypocrisy of wanting to be seen as a victim when the person she is bullying turns the tables on her, makes for an unsatisfying catharsis.

Throughout the play, Dawkins engages with the notion that a single person can have many identities, though it seems like his idea of the multitudes we contain is fixed rather than fluid. In the final scene, Erik comforts Mercedes by telling her that he thinks she’s a good person even though she has done something that goes beyond the pale of being merely objectionable. When she questions which girl she is, the one who did the bad thing or the servant of God, he assures her she is the latter. But the truth is she is both, just as Tara is both smart and cruel, Andi is loyal and morally corruptible, and Shauna is conscientious and condoning. Concluding on this note, the play reinforces a dichotomous morality that does not square with “The Crucible” or, more crucially, reality.

It’s safe to assume that Dawkins and all involved in this production mean well. When “The Burn” turns its energies toward engaging with all of its characters with respect, it becomes both more interesting and more compassionate. But it pads the envelope up front and misses opportunities for positive reinforcement. Dawkins crams a lot into his play but what gets left out is noteworthy. Ultimately, “The Burn” is a play about young people, but not necessarily for them. (Kevin Greene)