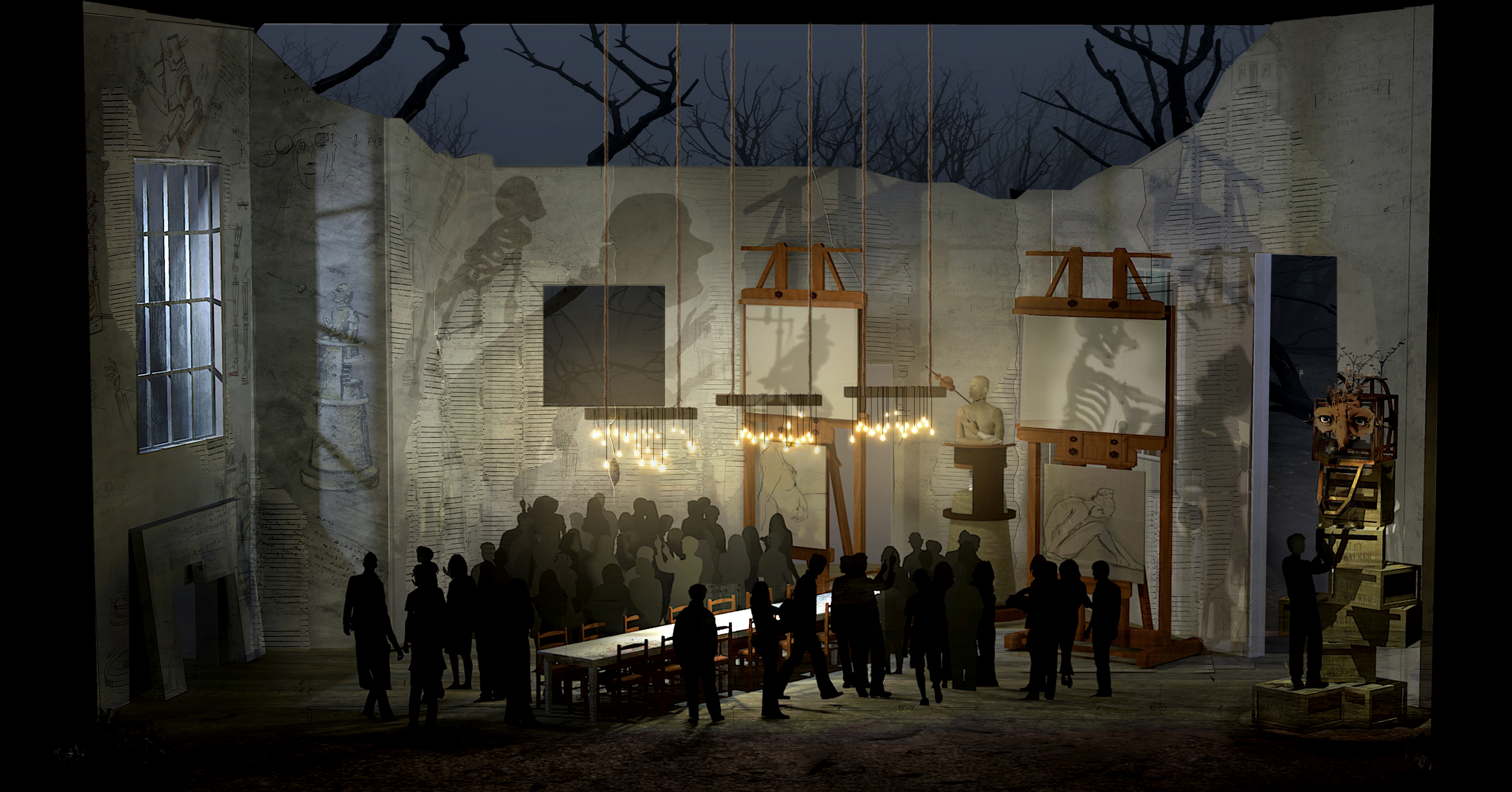 A model of the set of Lyric Opera’s “Faust” designed by John Frame/Photo: John Frame

Many retirement-age Baby Boomers are being forced into a second career rather than taking that cruise around the world. How many wonder, “What wouldn’t I give to have the chance to do it over again, making different decisions?” Generation X-ers may be wondering how their lives would have been different without their latchkeys. Even a Millennial could look up one day and think, “This can’t be my life. I want a do-over.”

An aged Faust kept his nose to his work for his entire life, denying himself the pleasures of a rounded existence. He wanted a do-over. He sold his soul to a devil in exchange for a rebirth as a young, vital suitor to a larger life. Who can help but connect with the fable of Faust?

Gounod’s opera lyricizes Faust’s journey in such a stunning way that it hasn’t been out of the repertoire since its 1859 premiere. As is always the case with a classic, honing, reimagining and weighing a world-weary work against a new world order is necessary to keep it dynamic. “When opera originated in the Baroque period, it was known as the cutting-edge form, experimenting with new things and combining all these different mediums,” Vita Tzykun, the set and costume designer of Lyric Opera’s production, tells me. “I think my generation of creators isn’t trying to get away from its origins, we’re trying to bring it back to the innovative art form it always has been.”

Lyric’s brand-new co-production with Portland Opera promises to do that. With director Kevin Newbury championing an extraordinary design team, there is a production ahead that honors both the opera and the audience, inspired by fine artist John Frame’s body of work. But how does the team function, with an artist who has no experience in opera as production designer, a costume and set designer whose childhood was immersed in the opera world, and a baritone enjoying a major operatic career while also gaining a foothold in the field of multimedia design as projection designer, all sitting at the table together? With overlapping disciplines and disparate experiences, who calls the shots? Whose storytelling is told?

“I was very intrigued when Portland Opera’s general director Christopher Mattaliano  contacted me, asking if I’d be interested in working with them in designing something,” sculptor, photographer, composer and filmmaker John Frame says of his journey into opera with “Faust.”  “I very easily said, ‘Sure.’ I did my own type of research which was to track back as far as I possibly could the Faust stories and how they were introduced. One of the interesting things to me was that a lot of the early productions were in fact puppettheater pieces. And it makes sense. There’s a kind of Punch and Judy simplicity about the structure of the plot in terms of it just being a triangle between Mephistopheles, Faust and Marguerite.

“Chris called again and said, ‘We’ve got the budget and we want to do “Faust” with you.’ I said, ‘I’m not sure.’ I’d never done this before, obviously. Now that it was getting serious I wanted to talk in more detail. He sent me a contract specifying what would be expected of me. I was on the verge of saying ‘No’ since there were so many things associated with that contract that I simply didn’t know how to do. Then I talked with Kevin Newbury, chosen to be the director, and we had a really good rapport from the outset.” (Newbury directed Lyric’s production of “Bel Canto” in 2015 and will helm “Fellow Travelers,” also opening this month as a part of Lyric Unlimited at the Athenaeum Theatre.)

“Kevin had suggested Vita as the costume designer,” Frame continues. “He’d worked with her several times and really liked her. I called her and during that discussion I discovered she’d also directed and done set design. She was completely steeped in the world of designing for the stage. I said, ‘You really should be the set and costume designer and I could be the production designer.’ It gave her a lot of responsibility for the technical aspects of the design that I simply didn’t know the answer to, while retaining my aesthetic as the core, the thread that runs through the production.”

She hesitated to attach to the project, never having been in a situation where someone else’s work would inform the design. But she wanted to work with Newbury again, which kept her interested while the team connected. “Kevin is excellent in facilitating dialogue. He always comes to the table with the motto ‘the best idea wins.’ He’s a very ego-free person,” Tzykun says. “Everybody on our team is ego-free. We respect each other’s work, so the discussions are very interesting.”

With further contact, her openness to working with Frame blossomed. Tzykun’s creative partner, David AllenMoore, came on as projection designer. Newbury, Tzykun, and Moore were given permission to play with Frame’s rough-hewn miniature sculptures like Tonka Toys. When called upon to create new pieces, including a miniature sculpture that impersonates Christopher Van Horn as Mephistopheles, Frame readily complied. As he sculpted, he filmed the work in stop-motion animation, which will be projected from backstage. Van Horn, merged with the miniature, will emerge full-blown onto the stage.

Baritone, multimedia artist, composer and director David Allen Moore (who received acclaim for his Jud Fry in Lyric’s “Oklahoma!” in 2013) left behind his country and Cajun music roots and youthful passion for electronic music for the opera house. The equipment required for video creation didn’t fit in a world-traveler’s suitcase. “In the late 2000s, laptop computers became fast enough to process video. Some exciting new software was coming out. Not long after that, Pico projectors came out. I started to learn the video software. This was where I wanted to go all along. My experience as a performer plays a big role in my multimedia designs. When I’m creating video for music, I’m thinking very deeply about the harmonic shifts, the phrasing and the larger dramaturgy of the work.”

Casting the character of Faust as an artist brings the multidisciplinary elements of the production full circle. There is always an uproar of excitement around a new production of an opera in the standard repertoire. We are gifted the culmination of these fantastic artist’s study of Faust, the questioner, Faust who looks back and says, “This isn’t my life. I want a do-over.”