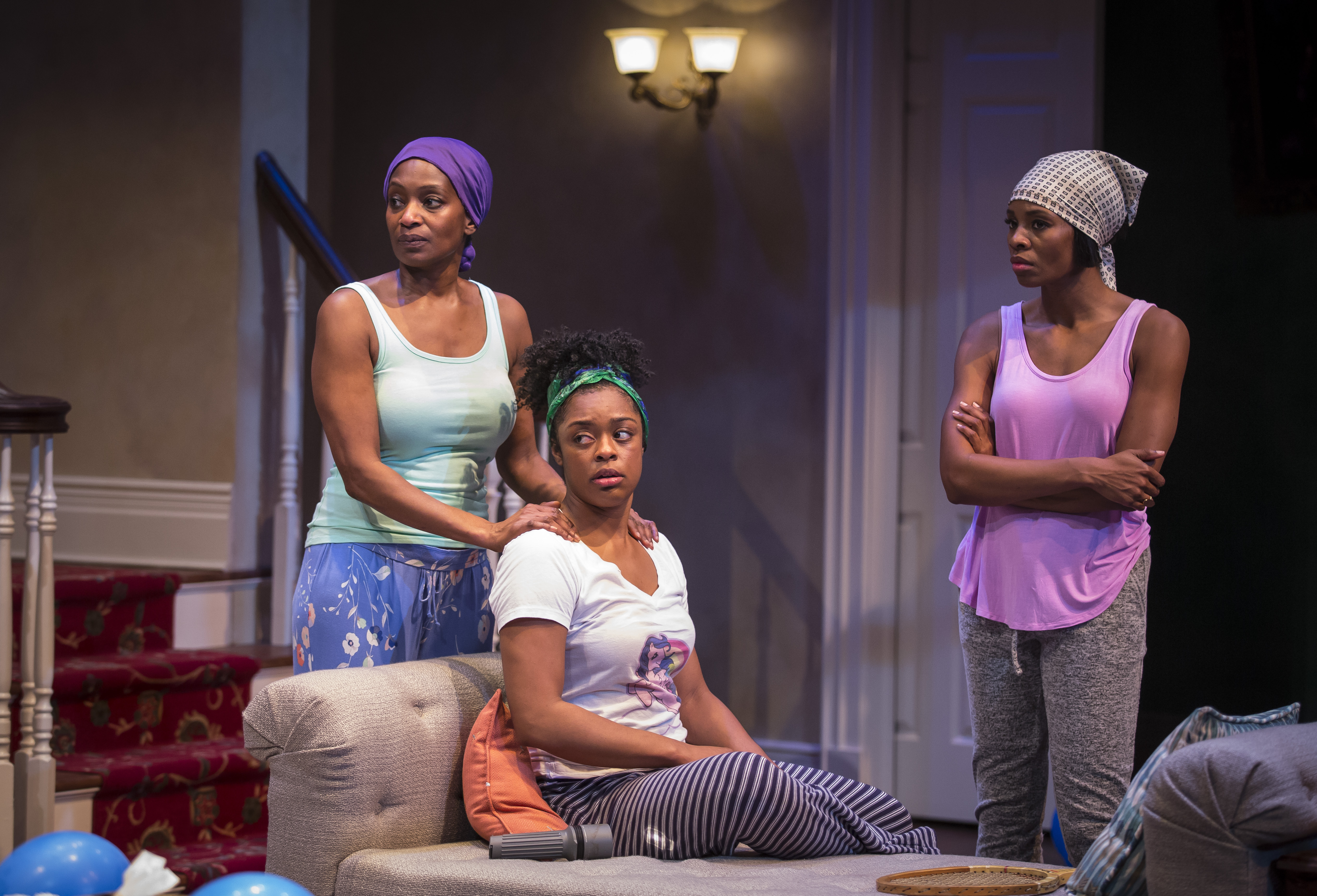 “Plantation!,” the latest from playwright and Lookingglass ensemble member Kevin Douglas, is a play about racism. It’s also a play designed for white people, which should come as little surprise given the demographic makeup of the company’s audience. At times, the play feels like an introductory course covering topics like white tears and reparations for the benefit of people who have never bothered Googling the terms. In presenting racism as schticky, educational and, most absurdly, a characteristic limited to only certain types of people rather than a systemic issue that effects everyone, “Plantation!” not only reduces its potential impact but capitulates to the very audiences that a more uncompromising piece might have shook.

With a sitcom setup and slapstick style, “Plantation!” comes out of the gate briskly but loses steam with plot devices that feel like placeholders for future better ideas. The matriarch of a Texas plantation gathers her three daughters and announces her intention to give their family home to the descendants of a slave who worked for and carried the child of the plantation’s founder and their ancestor. The young women, each a caricature of white privilege (the painkiller-popping youngest who mouths the lyrics to Cardi B’s “Bodak Yellow,” the emotionally fragile middle child endlessly trying to please her distracted and disinterested mother, and the supremely entitled eldest whose only goal is self-promotion at the cost of any shred of decency), are naturally dismayed at the decision but their mother holds fast. The three black women who arrive shortly thereafter are caricatures as well, meant as counterparts to the white women. “See, we’re not so different,” the play seems to say before demonstrating with prominent redundancy all the obvious ways they are.

By making its subtext explicit, “Plantation!” joins a recent, growing trend of works (“Breach” at Victory Gardens, “The Burn” at Steppenwolf for Young Adults) that promote certainty over ambiguity, and in doing so, coddle their audiences by setting the bar for what constitutes morally acceptable behavior low enough to skip over. There is nothing confrontational or even potentially divisive about the play, which limits its potential to say much of anything meaningful about racism, a subject not known for its neatness. Douglas has designed a play so clean in its presentation of character that we are never really asked to consider what is right or wrong. I found myself wondering what Thomas Bradshaw (a playwright who is far from risk-averse) or Aziza Barnes might do with similar material. My guess is that the result would be messier, more entertaining and, one would hope, actually intersectional. Case in point: a young Latina is treated thoughtlessly by the white and black women alike, her voice drowned out by cringeworthy ignorance or PSA-ready sidebars. It seems Douglas was too busy setting his sides in symmetrical opposition to be concerned about what, or who, might fall in between.

This middling approach treats all points of view as if they were equal, which masks the crucial reality that they are not. After offering an analogy to illustrate why Black Lives Matter calls itself what it does, one of the black women, an activist, then offers the unnecessary suggestion that the white women might think of the name as having an invisible “too” at the end. “Why don’t they call it ‘Black Lives Matter Too’ then?” one of them asks naively, leaving the activist fumbling for the clear explanation that the “too” is actually completely superfluous, much like the entire scene that encircles this limp substitute for discourse. For all its eagerness to writ macro racial micro-aggressions, Douglas’ play stalls when it approaches subjects that would widen the accountability net beyond this ensemble of not-even-all-that-well-meaning wealthy white women. Given that this play deals with the subject of reparations, a topic that our culture has been eager to avoid for hundreds of years, it would have been edifying to see Douglas handle this and other subjects less deliberately. It’s as if real conversations about accountability are a virus this production is energetically trying to contain, one that might have lethal effects on the conscience of its audience members if even a little bit of it were to seep through the fourth wall.

In a scene about midway through, the black and white characters study the large portrait of the plantation’s founder. After the black women point out that the figures in the background are slaves picking cotton, the white women offer a canned critical analysis noting how the black dots “lack details.” In art, context is important but it’s only one aspect of understanding. The viewer of any work should expand their view to include the institution in which the art is located and their own ability to access that space as well as how their participation in viewing influences the meaning and value of the work. “Plantation!” seems unshakably fixated on its particular context to the detriment of a larger conversation that involves a frank dialogue about the barriers of its own art form, the largely invisible but extremely present racial and ethnic barriers both to the stage and the seats. Theaters that are unwilling to consider their own part in this construction are unlikely to ask the same of their audiences. And so this play feels like consolation for those who believe that patronage entitles them to comfort and pleasure as opposed to tests of ideology and a sense of moral responsibility. If that is the model by which art survives then that is all it will do. (Kevin Greene)