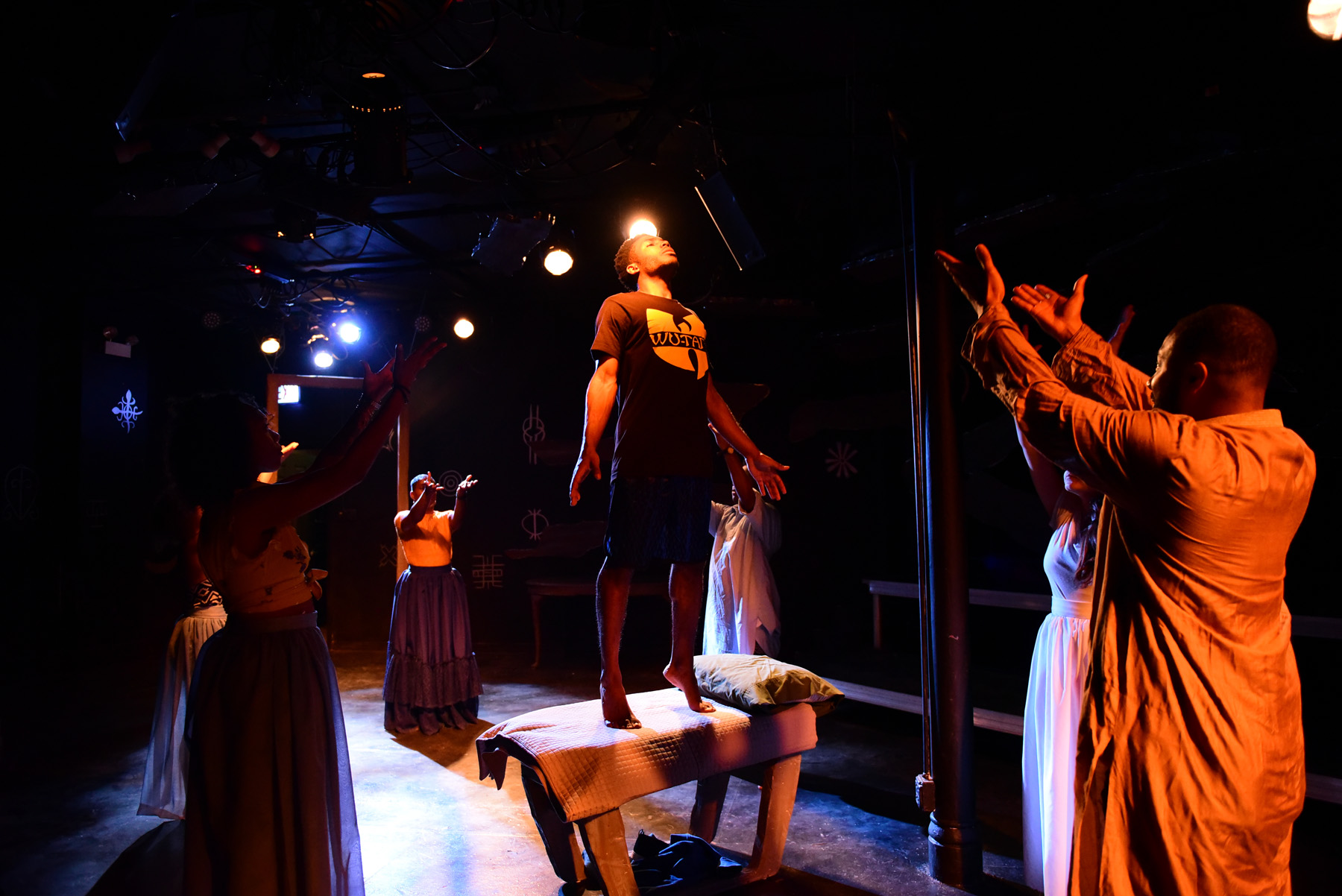 Jalen Gilbert with the cast of “Dontrell, Who Kissed The Sea”/Photo: Evan Hanover

A small but generous local premiere at First Floor Theater, Nathan Alan Davis’ “Dontrell, Who Kissed The Sea” is a spare, poetic forty-eight-or-so hours in the life of eighteen-year-old Dontrell Jones III, who awakens one morning with the vision of his ancestor jumping ship in the midst of the Middle Passage seared into his brain. Killing time during the doldrums of summer on the banks of the Chesapeake Bay, Dontrell observes his unique perspective on the world around him in a portable cassette recorder, addressing “future generations” in the style of Captain Kirk, albeit with an abstract twist. Possessed by an unshakable need to explore his past, he goes on a modest hero’s journey learning lessons about love, family and history.

Like Definition Theatre’s “Moon Man Walk,” “Dontrell” is implicitly rather than explicitly a black story. It is encouraging to see these kinds of stories given space alongside more overtly political works that can stumble on the roots of theater’s racist past as they confront the very audiences required for patronage. “Dontrell” is an engaging, rhapsodic work, directed with grace and maturity by Chika Ike, blending movement (with choreography from Breon Arzell) and narrative fluidly within an evocative sensory landscape achieved by a dedicated and ingenious design team consisting of Eleanor Kahn (scenic), Rachel Levy (lighting), Sarah D. Espinoza (sound) and Uriel Gomez (costume). Ike leads her cast into their roles intuitively; drawing such a complete family portrait in such limited time poses challenges but Ike and her ensemble make it look easy.

As Dontrell, Jalen Gilbert is inquisitive and earnest, a young man on the brink of adulthood not yet aware of his own personal limitations and the limitations imposed on him by his country on the basis of his skin. His best friend Robby (Jerome Beck), seems equally unperturbed, content to go between spitting rhymes and offering sage wisdom beyond his years. Playing Dontrell’s largely invisible father, Brian Nelson Jr. makes up for his limited stage time with well-delivered (although logically flawed) monologues about black women, three of whom serve as the emotional core of this play. While named for its male protagonist, it is Shariba Rivers, as Dontrell’s mother, who carries much of the play’s emotional weight, endlessly worried about a son who burns bright in a country that might rather see him extinguished. As of opening night, her big moment blew up a bit too quickly, though the restraint she shows elsewhere suggests that she is more than capable of reigning it in for greater dramatic effect. As Shea, Dontrell’s cousin, Brianna Buckley is as salty as the water in the aquarium where she works though she makes her care for her cousin understood but not overstated. Destiny Strothers plays Dontrell’s sister Danielle and the bond between the two of them is evident and easy.

In his dedicated wanderings, Dontrell meets Erika (Kayla Raelle Holder), a kindred spirit and a lifeguard who muses philosophically on the need for a “life to guard.” The two enter into sincere courtship culminating in passion, bodies and spirits cascading into one another. Their tryst runs briefly aground when Dontrell naively brings her home to his family and she confides in him a feeling of fullness that has a specifically biological explanation. Little is made of Erika’s race—she is white—by anyone in the play, a choice that is refreshing though also lacking in dramatic motivation. There is a sense that Erika’s heritage might be meant as contrast to Dontrell’s, a case of one family immigrating by choice and the other under duress, though if that is the case it is a very subtle acknowledgement.

The ocean is part of black history in America, an enormously consequential moment that for some would be their last. With history pulling at the spirit of this play like a gently ebbing tide, “Dontrell, Who Kissed The Sea” quietly suggests that the Middle Passage never truly concluded. (Kevin Greene)