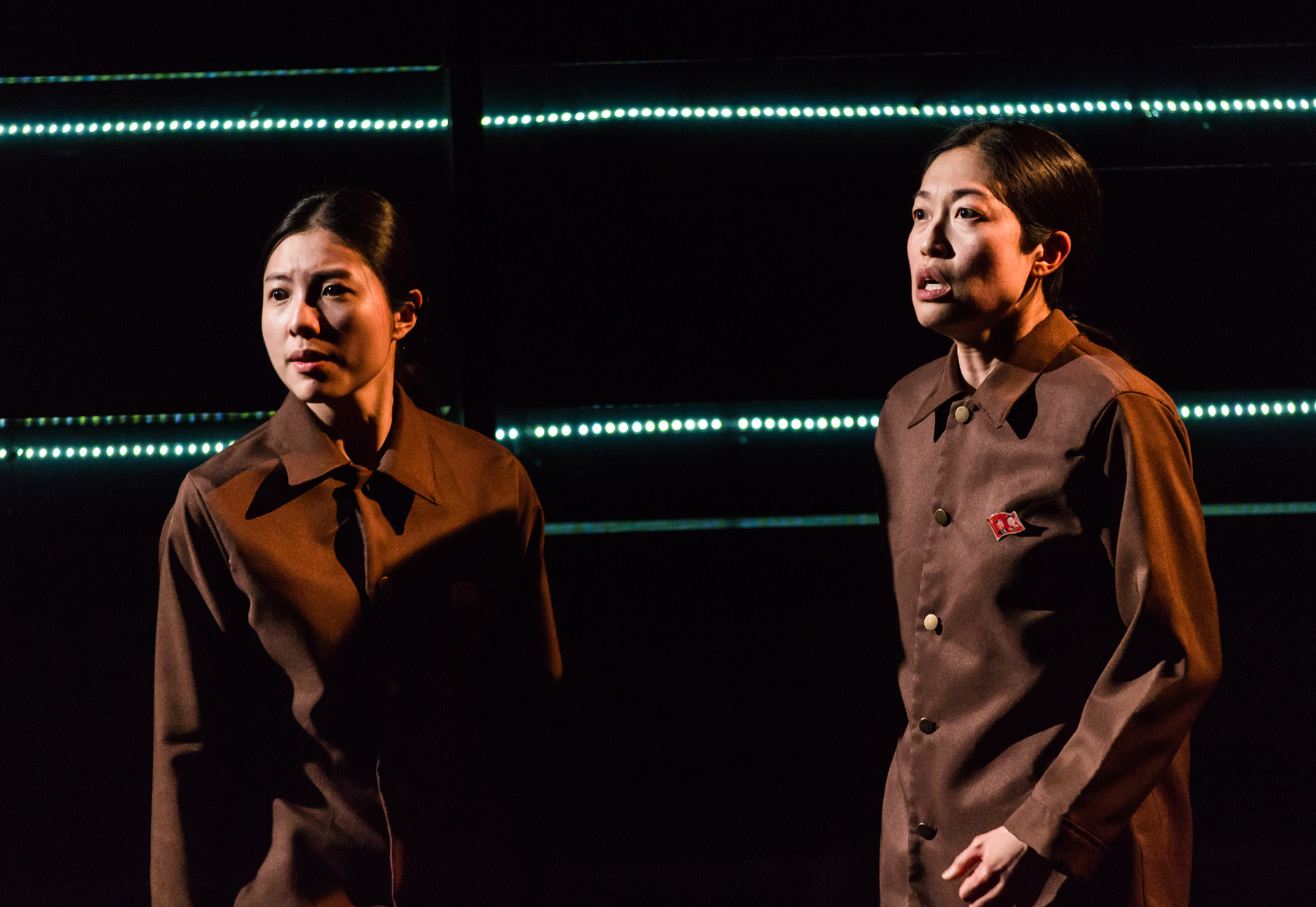 A bit of unexpected and potentially fortuitous serendipity occurred the same day as the opening of Mia Chung’s “You for Me for You” at Sideshow Theatre Company: the president announced that he had accepted an invitation, extended by South Korea on behalf of their northern cousin, to meet with Kim Jong Un. In the midst of Chung’s play, which is tender and pliable like a piece of meat after it has been pulverized, a character points out that the only people who are allowed to come and go in North Korea are Americans, an observation not limited to corporeal reality. Chung imaginatively illustrates the collective will of the state as well as its ability to infiltrate all aspects of civilian life and make the dystopian and chaotic normal and vice versa.

Beginning in North Korea with two sisters, Minhee (Helen Joo Lee) and Junhee (Jin Park), Chung makes clear her intention to project the experience of being an outsider into the consciousness and conscience of her audience by beginning her play in Korean, which doubles as a means for director Elly Green to coax out the gifts of her two leads. Later, Chung adopts a brilliant conceit of translation by having American characters speak in a jumbled half-speak, enhancing the subjective experience of displacement, confusion and anxiety.

It is not just language that Chung uses to achieve emotional and narrative impact. “You for Me for You” compares and contrasts the totalitarian bureaucracy of North Korea with its American counterpart. The results are as unflattering as they are revealing, especially for anyone clinging to a Western superiority complex. While Minhee remains trapped in a nightmare state where dream logic feels oppressively routine, her younger sister experiences the disorienting effects and limitations of the American brand of freedom. She learns to advocate for herself in her workplace and her relationships though she is unable to fully accept the thoughtless indulgences of “American imperialists”; a part of her soul is still held by the dictatorial grasp of her home country.

At just over one-hundred minutes without an intermission, “You for Me for You” feels its length, although the production itself is fleet and inventive, especially in transitions. Given the composite nature of the scene work, it’s difficult to say where the playwright might cut, as all the information seems no more or less valuable to the overall impression. Chung’s play is like a mural constructed out of sharps of colored glass, dazzling from a distance, a triumph of vision when viewed up close. It squares with Sideshow’s outsider vision of the theatrical arts; they are a company that gives the impression of succeeding in their overall mission even while individual productions vary in quality. “You for Me for You” is worth your time and effort, in part for the specificity of its political relevance, but more so for the empathetic possibilities of its means. (Kevin Greene)