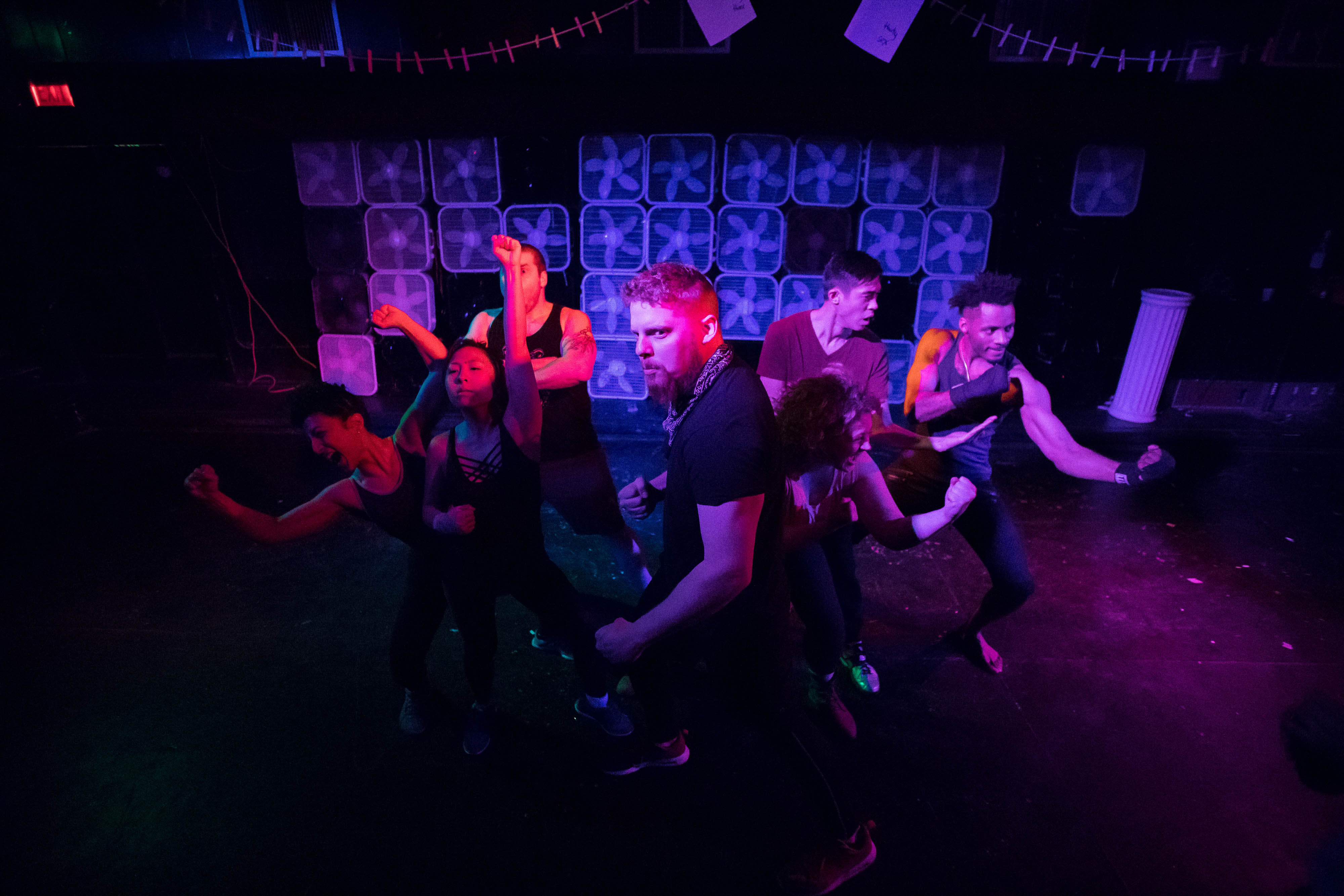 The cast of “A Story Told In Seven Fights”/Photo: Joe Mazza

On opening night of The Neo-Futurists’ “A Story Told in Seven Fights,” I sat in a theater full of memories, surrounded by artists I respect and admire and openly wept. Like most shows put on by this prolific institution, “Story” is complex, layered and sometimes hard to watch, but it delivers the kind of catharsis you can’t get at any other Chicago theater.

But as we delve deeper into Craven’s life we see Dawkins’ hero fall apart. And it’s not just Craven who turns out to be not so heroic; his entire cohort of Dadaists and Surrealists are the kind of artists that today would be shunned as abusers of their audiences and fellow artists.

In true Neo-Futurist fashion, the power of this show is in its truth. There is a sense that what you’re watching is exactly what happened in the rehearsal room as the production was devised. It seems clear that Dawkins sought an ensemble of brilliant artists and intellectuals who would challenge him. And he listened and understood when the ensemble brought him their conclusion that his love of Craven was misguided and harmful. His idolizing of Craven and his behavior was tied to Dawkins’ whiteness, his privilege to move through the world with very little consequence for his actions.

At the heart of this show is the rage and heartbreak that The Neo-Futurists and their fans have felt since Neo founder Greg Allen came close to shutting them down when he revoked the company’s rights to perform its flagship show, “Too Much Light Makes the Baby Go Blind.” As much as this show is about Dawkins having to let go of Craven as a hero, it is about Dawkins letting go of Allen as a hero, too. “Story” may not resonate with you if this is your first Neo mainstage production. If it’s your hundredth, then the point at which you realize that Allen’s betrayal is the core of the show will be (as it was for me) the point at which you start to weep as you face your own fury that Allen would dare try to take something so beautiful and important away from a city that loves it so much.

The past few months have been a time for facing the faults of our heroes. Nearly every day has brought a new story of a man we previously idolized turning out to be a sexual predator or a white woman we thought was woke showing that her feminism only extends to people that look like her. “All your heroes are problematic” is a frequent post on social media connected to articles outlining the most recent revelation. To challenge your role models is exhausting but to come out the other side a better person, advocate and artist will always make it worthwhile. (Emma Couling)