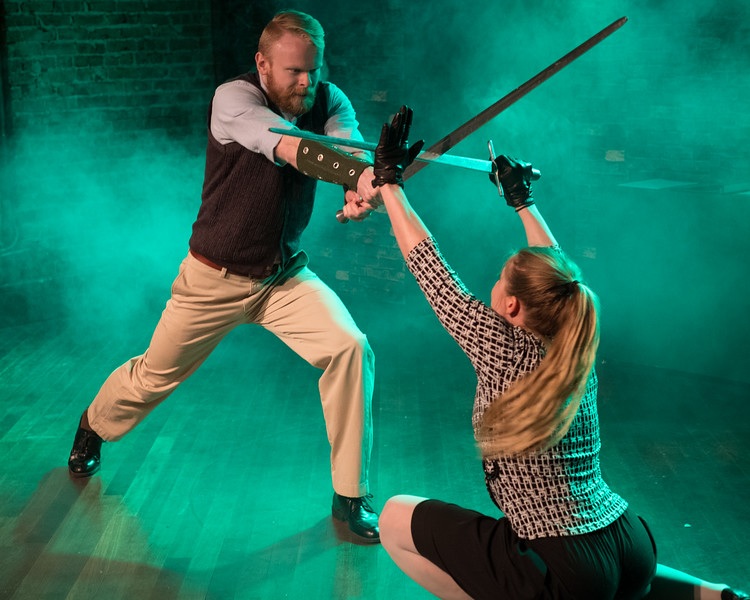 Monsters come in all shapes and sizes in Qui Nguyen’s “She Kills Monsters.” Presented by The Cuckoo’s Theater Project, Nguyen’s play begins a few years after Agnes loses her entire family in a car accident. The sole surviving family member, she now teaches at the high school her deceased younger sister Tilly should be graduating from. Tilly lives on in an epic Dungeons & Dragons quest that she penned shortly before her death. A stranger to the world of fantasy role-play, Agnes elicits the aid of a geeky high-school Dungeon Master to help her make sense of this bloody but also very intimate epic tale set in a world where everyone in the questing party is gay and the tormenting demons resemble very real high-school cheerleaders.

Playing the two siblings are Hillary Griffin (Agnes) and Jillian Leff (Tilly), who begin their quest more as strangers than sisters. Of course, they end up as comrades in arms. However unsurprising this transformation is, the two actresses elevate the material well beyond cliché. The other cast members infuse the stage with a lot of positive energy as well as some truly kickass fighting skills, which fight director Kai Young exploits at every opportunity. Under his tutelage, the actors engage in nifty sword play that is paired nicely with Marc James’ retro sound design.

Although action-packed, director Angela Forshee mostly emphasizes the play’s character development over gore. The middle section of the play does drag a bit and I could have done with a little less fog, which by the end of the production reaches haunted house proportions. But overall this is a fun and touching production that reminds us that there are things in this world scarier than monsters. (Noel Schecter)