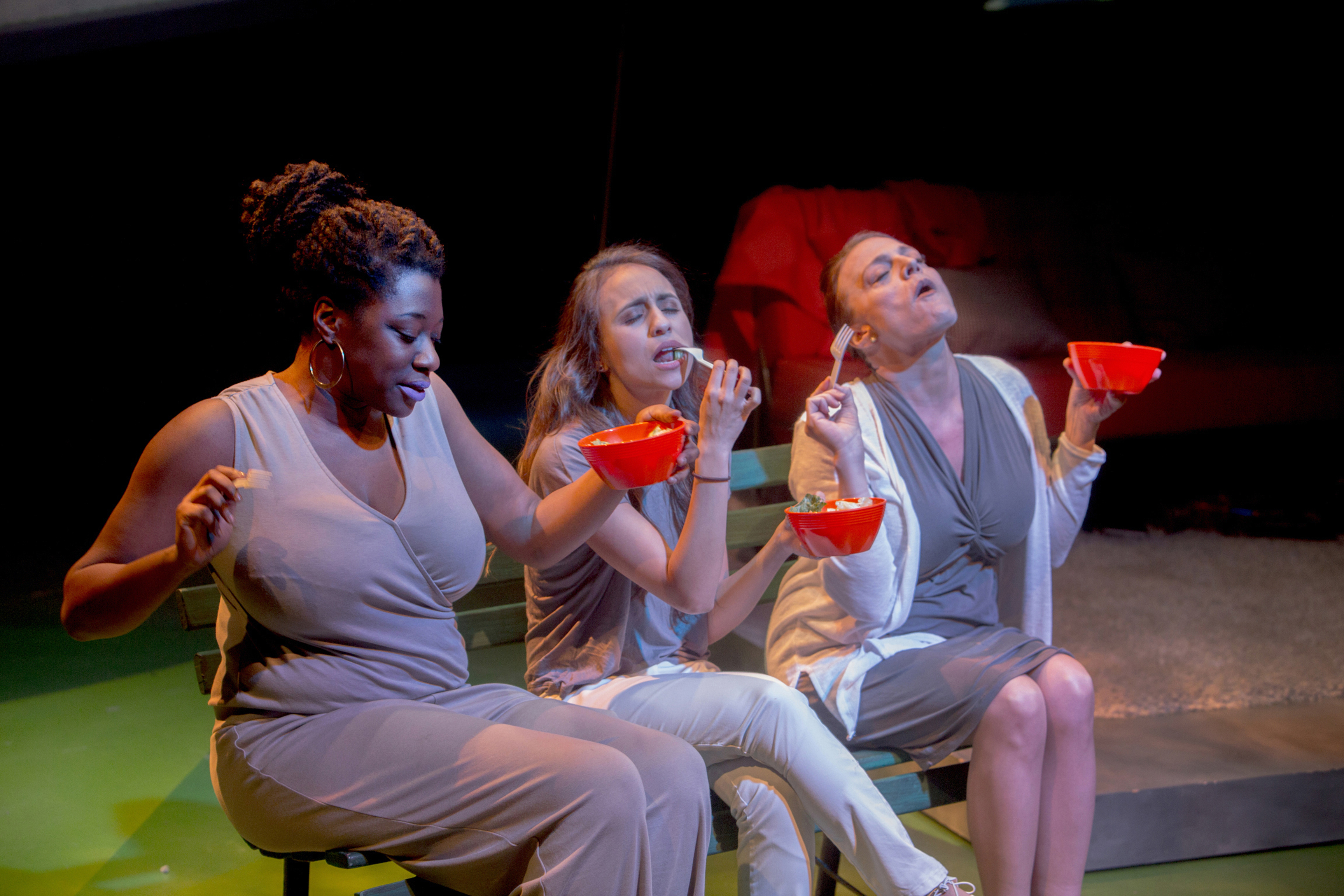 I won’t say much. It’s best you go into Sheila Callaghan’s “Women Laughing Alone With Salad,” brilliantly and evocatively staged by Devon de Mayo, with as little knowledge and as few expectations as possible. The experience of watching this play is absolutely ridiculous, until it absolutely isn’t. Don’t read about it. Don’t ask your friends about it. Just buy your tickets and go.

The play is poised to make a point about the self-loathing of women or about how we are portrayed in the media (which it does, scathingly), but, mainly, this is a play about men and “the women who haunt them.” Our patriarchal society does a deep disservice to women, but we know this. What we rarely explore, and what Callaghan has exhumed for us in this play, are the powerful effects of male self-loathing and a society primed to cater to it.

The aptly named Guy (Japhet Balaban) is our everyman and our women revolve around him. He’s a “good guy”—an advocate, really—who wants more for women than their sad, salad lives and who is “as frustrated as [anybody] that women hate themselves.” He’s a “tortured artist” with an apartment full of empty Moleskine notebooks and instruments he doesn’t know how to play, who is desperately seeking something real. To him, “something real” looks like a woman with confidence and curves, who can eat a burger and dance in a nightclub, who isn’t afraid to stand up for herself, who can say no to sex when she doesn’t want it, even when pressured and tested and tried. To him, “something real” is a woman who is as unbreakable, infallible, and as inhuman as the woman laughing into her greens in a stock photo.

Callaghan’s wit, humor, grace, and supreme rage are on prominent display and in excellent hands with this exceptional cast. All four of them commit viscerally to the vision laid out by Callaghan and director de Mayo, who has staged this turbulent piece with skill, awareness, and, it seems, respect for her team.

“Women Laughing Alone With Salad” harnesses theatricality to explode an internet meme and its twisted evolution. There is little else like it and I strongly urge you to experience Theater Wit’s production. (Erin Shea Brady)