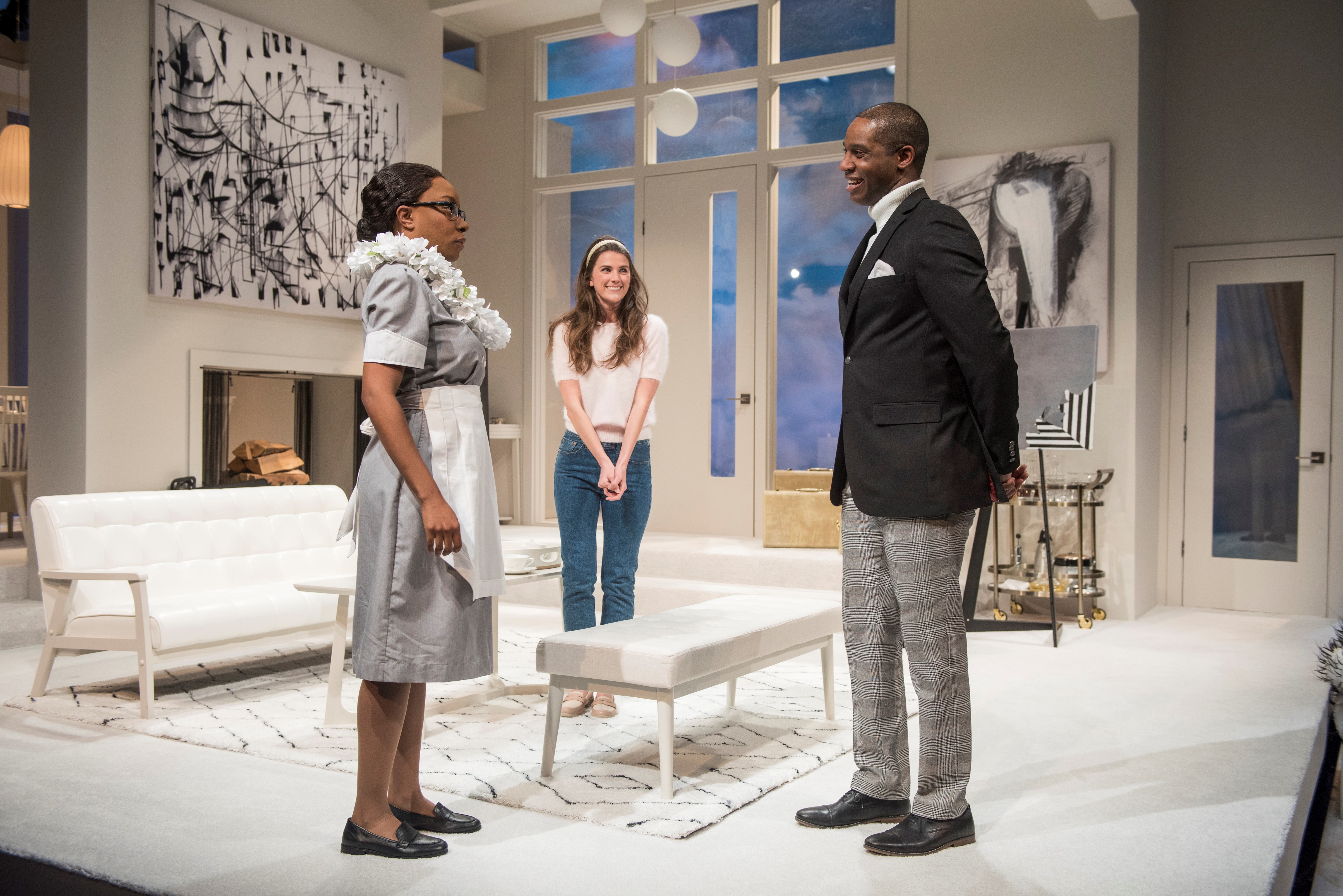 I left the opening night performance of Court Theatre’s “Guess Who’s Coming to Dinner” feeling like the play’s affable whiskey priest: the cockles of my effusive heart warmed all the way through. Though it wasn’t so much because of the story, which has aged less like Camembert and more like Kraft Singles. Rather, it was the actors on the immaculately decorated stage, their portrayals as rich, savory and full of complex racial history as chicken fried steak and collard greens.

Originating as a movie from a screenplay by William Rose, “Guess Who’s Coming to Dinner” premiered in 1967 at the height of the civil rights movement. And while it’s tempting to credit its trio of lead actors—Katharine Hepburn, Spencer Tracy and Sidney Poitier—for engendering a mountain of goodwill large enough to endear this portrait of interracial love to a market audience, a reevaluation fifty years later suggests that “Guess Who’s Coming to Dinner” gets by on more than just charm.

While Todd Kreidler’s adaptation, which premiered in 2013, elicited verbal reactions throughout the night, its fixation on the blind spots of white liberalism lacks the impolite wallop the original may (or may not) have had in the late sixties. The erasure of Black Lives Matter in the media, the dearth of intersectionality in the Women’s March and #MeToo movements, along with the endless sensitivities of well-meaning white folks who are quick to play devil’s advocate and slow to call out their racist relatives are points of ongoing shame for the very same people who find comfort in the notion of the “right side of history” and the security of their place in it. “Guess Who’s Coming to Dinner” might actually be less popular now than it was in 1967, although for reasons that underline the shifty allegiances of white people more than any significant changes in mentality toward people of color.

The play is situated in that bastion of sunshine and liberal thought: California. On multiple occasions, it highlights the fact that its black and white characters are separated by a distance of nearly one-hundred miles, the length of a drive from Sacramento to San Francisco. A play with many knowing lines, at one point Christina (Mary Beth Fisher), the wife of a newspaper man, Matt (Tim Hopper), who prefers his race relations theoretical, and the mother of a daughter, Joanna (Bryce Gangel), who has brought home both a beau and a racially charged “situation,” addresses the mother of her daughter’s love interest saying, “I wish we had met under different circumstances.” “How?” she responds, the simplicity of the line cutting through the work’s exposition-heavy plotting. The two families here never had any reason to meet, not then and not now, separated not so much by miles and freeways but by a history that has systematically disempowered one to the immense benefit of the other.

In contrast to the work of a playwright like Ike Holter, whose plays are not only rooted in geographic specificity but also feature black and brown characters who are ethically compromised and morally complicit, “Guess Who’s Coming to Dinner” is a relatively polite and at-times painfully tidy work. Part of the reason why it was so digestible to a mass audience in 1967 (the movie grossed $56.66 million, more than sixteen times its budget) is the cleanliness of the black man standing next to the white woman at the play’s center, the latter being arguably more in the spotlight than the former. While Dr. John Prentice (Michael Aaron Pogue) is the source of Matt’s chagrin and much of the play’s conflict, he is a character without blemish, a narrative invention that has proved particularly insidious (“Driving Miss Daisy,” “The Shawshank Redemption,” the list of Morgan Freeman movies goes on). But this was not Dr. Prentice’s movie and it is not his play. His own parents (played perfectly by Jacqueline Williams and Dexter Zollicoffer) outshine him in their willingness to speak personal and national truths. Even his bride-to-be, a young, “aggressive optimist” with every silver-spooned reason to be so, overshadows him. Though we may want very much to see premonitions of “Get Out” (which will be screened as a part of the production’s supplementary programming), the play keeps its sympathies straight by continuing to deprive Dr. Prentice of the nuanced humanity that it endows its white characters with bountifully.

And yet for all its dramatic and ideological shuffling, this production is a must-see. Court has procured the ugliest furniture and best acting talent money can buy. While the veterans are predictably impressive, it is the young talent, still thrillingly evolving, that makes the show unforgettable. Bryce Gangel and Sydney Charles, in particular, are electrifying, Gangel for elevating the purity of Joanna’s heart into something transcendent and Charles for her ability to do more with an unblinking stare than most of us can do with our entire being. Not to mention her enviable comic delivery and a singing voice weathered and toned beyond her years. She is given the play’s emotionally loaded final moment; she deserves it and so much more.

If not for the fact that we live in a town where we can easily locate restlessly engaging new work (although finding theatrical work of any kind on the city’s South and West Sides is an ongoing embarrassment for a theater community that labels itself progressive), this is the rush that theater can provide, the thrill of watching talent develop through sheer determination, will power and well-timed opportunity. Enough credit cannot be given to these young actors, who are worth seeing on any stage though the inspiring power of seeing them on a stage of such literal and figurative size cannot be understated. An appreciative acknowledgement is due to director Marti Lyons and associate director Wardell Julius Clark (both of whom demonstrate that they too deserve these assignments and designations), casting directors Cree Rankin and Becca McCracken, and the artistic staff of Court Theatre who continue to look hopefully forward even as they gaze wistfully back. (Kevin Greene)