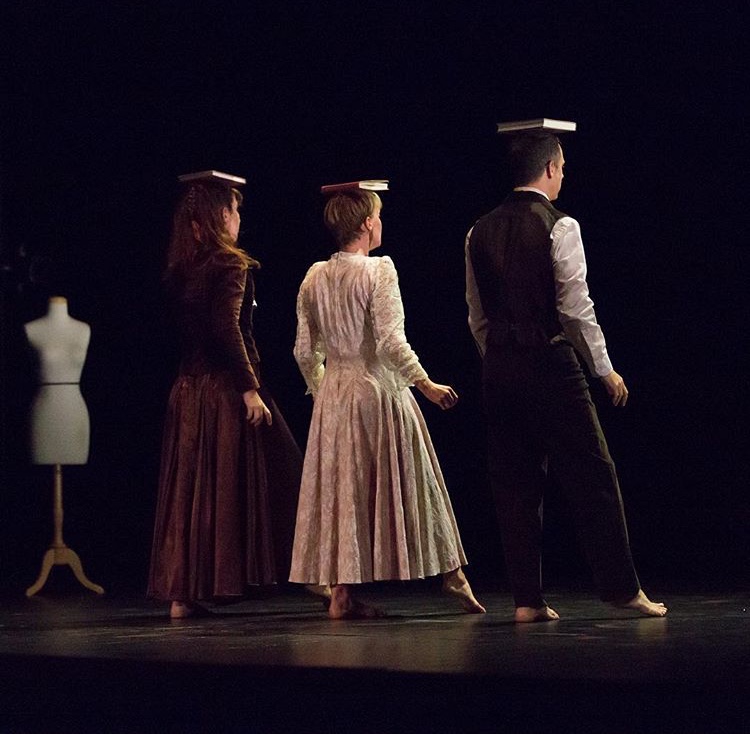 Some creative projects are crafted from a complete vision at the outset. Others evolve over the course of years, as is the case with RE|Dance’s “The Mysterious Disappearance of the Second Youngest Sister.” The creative team of Lucy Riner and Michael Estanich worked a ten-minute solo, created for one of Estanich’s ballet teachers in his graduate program back in 2009, into a duet and then a twenty-five-minute trio in 2010. When the group had the opportunity to perform at the Minneapolis Fringe Festival in 2011, a fourth dancer was added and the piece grew to a standalone forty-five minutes. It then sat dormant in the RE|Dance repertory, with only short excerpts performed until now. The group will make the Chicago premiere of “The Mysterious Disappearance” in its entirety at Hamlin Park Fieldhouse on Thursday and Friday, March 29 and 30.

The piece loosely tells the story of a young female writer, grappling—quite literally at times—with three characters of her own creation. An ancient Underwood typewriter, a dress form (which points to the title), stacks of books and Victorian-inspired garb (by dancer and costume designer Jeff Hancock) set the scene for intimate character development and a tinge of claustrophobia. The narrative, abstract and non-linear, is constructed through a series of duets, trios and quartets that suggest conflicts, flirtations and familial bonds. “The author becomes so overcome with her characters in her imagination that she feels she doesn’t have control over the book,” Riner says of the storyline. “There are moments when she enters into our world and, at the end, she’s struggling to have control over how the story is told and the characters are burying her. I think it’s how Michael works as an artist. He has an idea that is way too big, and then this group of dancers who want to have ownership over their characters. And we have a lot of fun working that way.”

There is a strong sense of characterization in “Mysterious Disappearance” and much employment of props, yet the piece is ultimately abstract and very much open to interpretation. Riner says this approach to dance theater is intentional and a defining mark of RE|Dance. “We’re trying to make pieces entertaining enough but not frustrated at the end where you don’t know what happened,” she says. “I don’t want to spoon-feed an idea, but I do want you to enjoy yourself and not leave a modern dance concert frustrated that it was so abstract you didn’t understand anything. There are so many modern and contemporary dance companies in Chicago making their niche. I think this piece personifies the way we like to work developing characters and scenic design.”