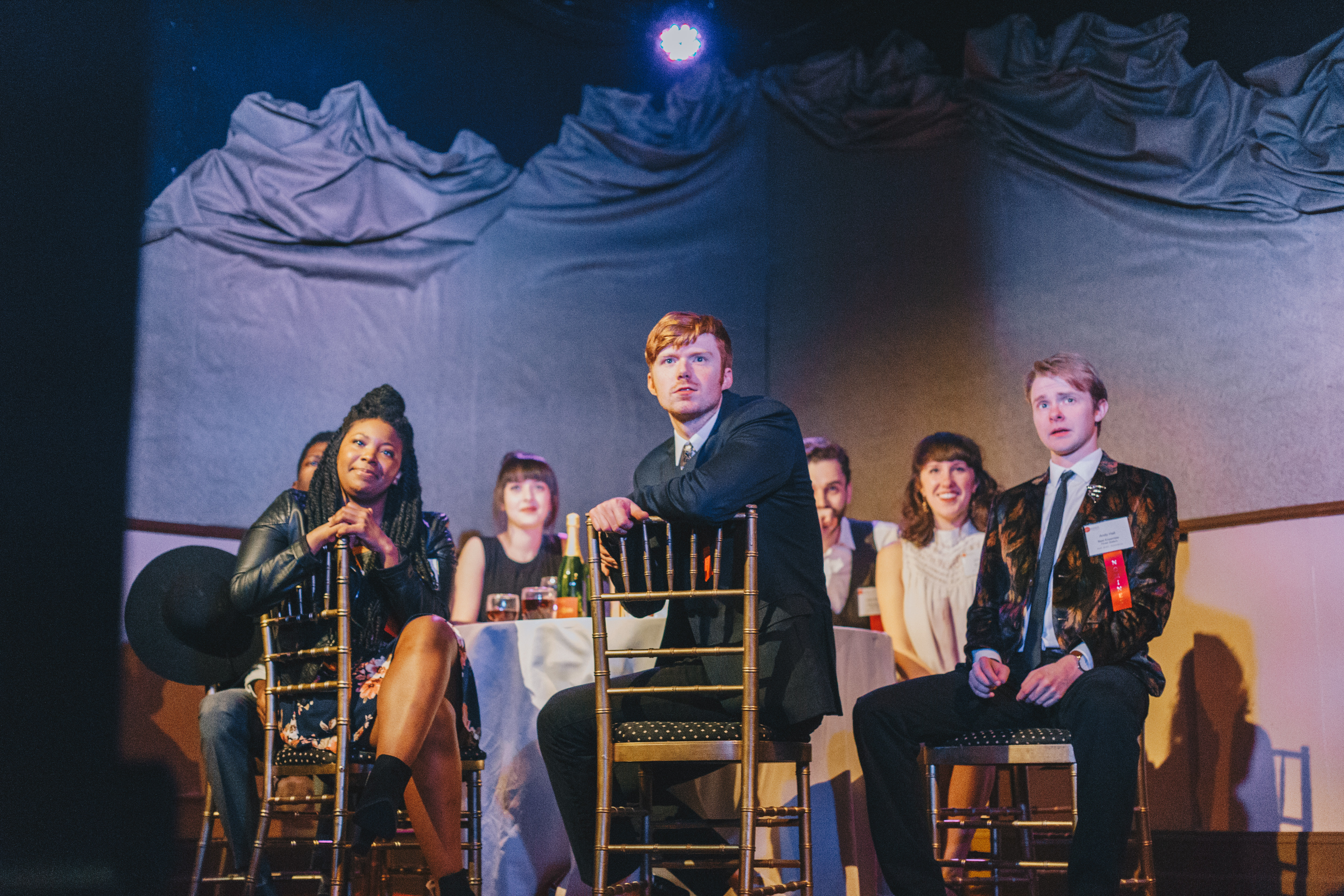 The cast of “Red Bowl at the Jeffs” /Photo: Montana Bruns

In contrast to the bigness of the screen, the tragedy of the stage is often inversely related to the smallness of the quest at hand. The search for a cup of rice or a lost piece of jewelry can be far more spiritually and emotionally engaging than the monolithic pursuit of Olympic gold or the Presidency. In Beth Hyland’s “Red Bowl at the Jeffs” the quest is, relatively speaking, modest: a still-young storefront theater company has been nominated and hopes to win a non-equity Jeff Award for Best Ensemble. It is, in many ways, the opposite of abstraction: either they will win or they will not. However, in Hyland’s hands, the drama of making drama becomes affectingly connected to a deeper longing for meaning, structure and fulfillment, each more tenuous and evasive than the last.

Anyone who has spent time in and around the Chicago theater community knows that there is as much, if not far more, to laugh about as there is to cry about. Art-making is easily conflated with meaning-making, that very human endeavor that has inspired countless Father John Misty songs, and a good comedy is always just on the verge of becoming an abject tragedy. And vice versa. Hyland takes these dizzying realities and makes them crucially plain. The exceptional ensemble plays her well-defined types (the exhausted director, the supportive lead, the handsome asshole, the naive newcomer), never once giving the impression of existing within a writing exercise even if, on paper, the conceit of the play (much of which takes place around a large table with actors speaking over top of each other, frequently facing away from the audience) does sound like it could be one.

According to the company, “Red Bowl” is “loosely inspired” by “Three Sisters,” though Chekhov’s presence here feels more loose than inspirational, not because Hyland’s observations of that very particular brand of Chekhovian misery aren’t astute, but because her play, separated from that tentpole of modern drama, stands confidently on its own. “Red Bowl at the Jeffs” is a positive indulgence, a meta-theatrical work that does not so much eat itself as swell with a productive self-awareness. Constructed as a roman à clef that will delight local audiences with its mixture of reality and fiction (the Goodman and Steppenwolf get name-dropped alongside amusing inventions like “Chicago ER”), it does not lose its sense of purpose even at the heights of its own cleverness, of which there are many.

Much credit can and should be given to Hyland, whose gifts as a writer of grounded characters within high-concept, meta-tinged scenarios are ear-catching and praiseworthy. In Rebecca Willingham she has a director and collaborator who intuitively understands the needs of her work and insures that the production’s heart and brain stay in constant conversation. The theater community (even Chicago, with its pretensions of blue-collar utilitarianism) loves an artistic duo and the pair, who have worked together on all of The Sound’s productions thus far (2015’s “Seagulls,” another Chekhov experiment, and 2016’s haunting “For Annie”), are on an inspired roll.

“Red Bowl” takes ardent flour and eager water, sprinkled with yeasty inspiration, and turns the whole thing into the dough of drama with luscious crust and nourishing crumb. For The Sound, “Red Bowl” can be seen as a premonition, a desire for a reality that does not come without complications. I hope this vision comes true for the company and that they make good on the promises of the play that they will be able to control and address (i.e. the legitimate critiques of racial imbalance in the theater community). Time will tell whether The Sound becomes, as reflected in the hopes and dreams of the fictional ensemble herein, an iconic chapter of Chicago theater history. In the meantime, they are offering a meaningful commentary on the root of the desire and its bittersweet fruits. (Kevin Greene)

The Sound at The Frontier, 1106 West Thorndale, thesoundchicago.com, $10. Through April 21.