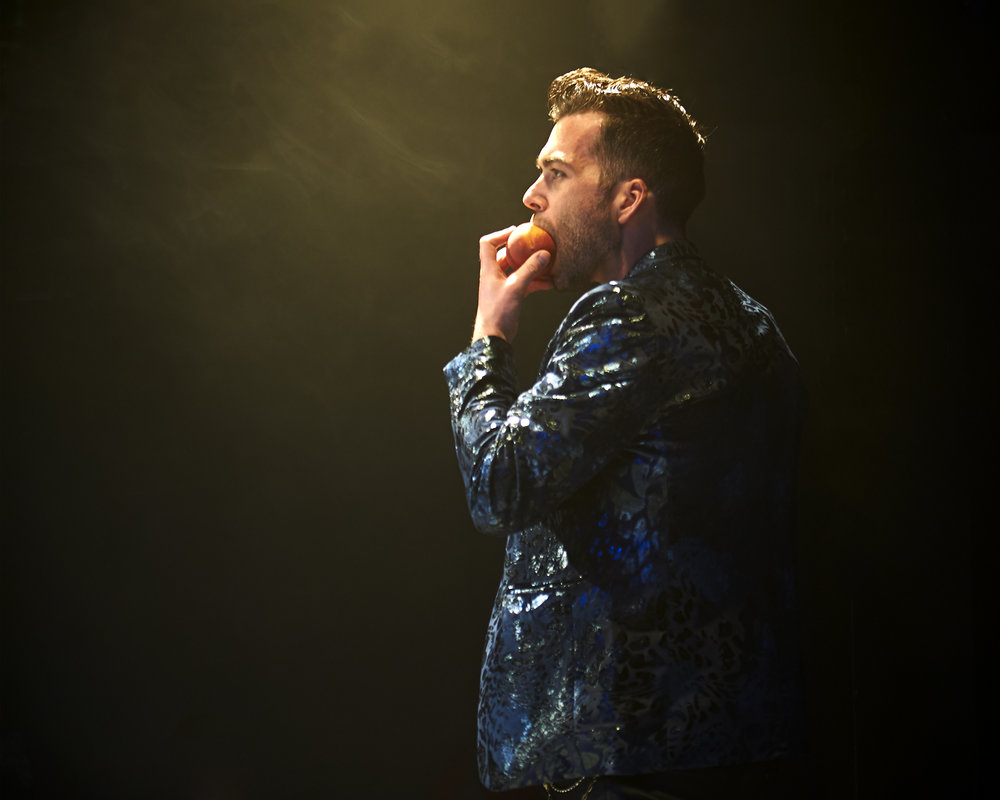 In the hallowed halls of British rock ‘n’ roll aristocracy you will find both nihilism and narcissism, plenty of pretension and indulgences of all manner and kind. Think of high-profile stars from the past forty years who still hang around: Morrissey, Thom Yorke, Bono, the Gallaghers. And while self-righteous stardom is far from an exclusively English phenomenon (indeed it seems anathema to the country’s entire ethos, but that’s another matter), it does seem to breed more wildly in the Isles than stateside, where we prefer our celebs to perform pedestrian relatability even as we go out of our way to educate ourselves on the extent of their prosperity, actively working to set them apart from ourselves as we aspire to be like them.

Simon Stephens’ “Birdland” unfolds like a PR nightmare, feeling at times like a modern proxy for the music industry’s most legendarily dysfunctional bands, more than a handful of whom were British. At the center of this ignominious shit-nado is Paul (Joel Reitsma), a Chris Martin antichrist and a malevolent, sniveling weasel who makes Draco Malfoy look like Prince William. Paul is the front man of an enormously (one might say embarrassingly) popular band currently at the peak of stardom, a fact Paul aggressively contends points to some kind of rightness (his articulation on the subject is inversely related to his confidence in it), although the journalists in the play would (and do) argue that it more closely aligns with the band’s shift from specificity to broad appeal. And while the play smartly withholds whether this transformation is a shrewd, cynical calculation or merely an artistic evolution, it does point to the self-fulfilling prophecy of popularity: crowds of a certain size inevitably attract curious onlookers who, inadvertently or not, grow the fold.

Paul, however, is not one for details or thinking things all the way through. At one point, he proffers that a Moscow restaurant has the best vodka in the world, as if the process of making vodka wasn’t identical for every brand. Paul is a poster child for late capitalism, a market enthusiast who never bothered to finish reading the story of Midas. He is a consummate bullshit artist who has made the miscalculation of believing his own bullshit. He keeps the company of enablers, some well meaning others sycophantic opportunists, and his entitlement to their time and attention eventually becomes catastrophically untenable, arguably by his own design. Paul displays a radical lack of interest in the autonomy of others as well as a severe degree of emotional detachment coupled with a morbid curiosity, which turns emotionally torturing the people in his life into a source of amusement to him. And while the play suggests at times a psychopathology at work, it is far more enlightening to see Paul as merely an exaggerated reflection of the toxic effects of masculinity, celebrity and the global marketplace. Paul is an everyman with a microphone, a stage and, most crucially, an audience anxious to believe his every word.

“Birdland” raises troubling questions along the way, such as, at what point does writing such a distastefully indulgent character become itself an indulgence? I had a similar issue with “Posh” a few years ago: watching young men destroy things as a form of entertainment engineers a scenario in which pleasure and disgust become mutually bound. The gratifications of Stephens’ play come when Paul’s ego is denied (particularly by the play’s women), but this, like much of Paul’s aimless fun, is sadistic pleasure, devoid of empathy. To his credit, Stephens does not overly expend his energy in normalizing Paul’s behavior or asking us to sympathize with him. Nor does he paint him soullessly into a corner, though by couching his toxic masculinity in celebrity and the music industry and sprinkling in a suggestion of mental illness, Stephens does put some distance between Paul and the rest of us male normos, who are just as capable of inflicting our wanton egos on those around us, even without ready access to expense accounts.

My concern is that comeuppance is a way of isolating a systemic issue into individual actions and that its neat satisfaction is antithetical to our collective need for a deeper understanding of accountability. What does it say about we the audience if our pleasure is derived from the pain inflicted on someone who causes others pain? Is it possible that, in contrast to the bland, discount-motel music aesthetic of Coldplay, a band that is English manners incarnate, that what we want from our celebrities, of all artistic disciplines but especially music, is a little shit-kicking free of any wrist-slapping, even if the costs are human decency and dignity (think of all those trashed hotel rooms and then think of all the service industry folks tasked with cleaning them up)? What will it take for us to stop enabling, through clicks, listens and views, this kind of behavior? Are we up to the task of deconstructing our relationship to celebrity culture? The deafening roar that bookends this production suggests the task could be met with unrestrained resistance.

“Birdland” is a cold work set in a colder world. It seems like a nearly unbearable thing to write and somehow an even tougher thing to bring to life. All the more reason to credit this ensemble and its unflagging brilliance, as well as Jonathan Berry in what, by my estimation, is his best directorial work to date, a fusion of his innate talent for managing the demands of large casts and his increasingly impressive scene work. “Birdland” is one of Steep’s most memorable works in recent memory, no small feat for a company that is far from risk-averse. It begs to be seen for its uncompromising vision of humiliation, degradation and manipulation as being part and parcel of the male emotional weapon kit.

The moral is an unpleasant but essential one: kill your idols before they kill you. (Kevin Greene)