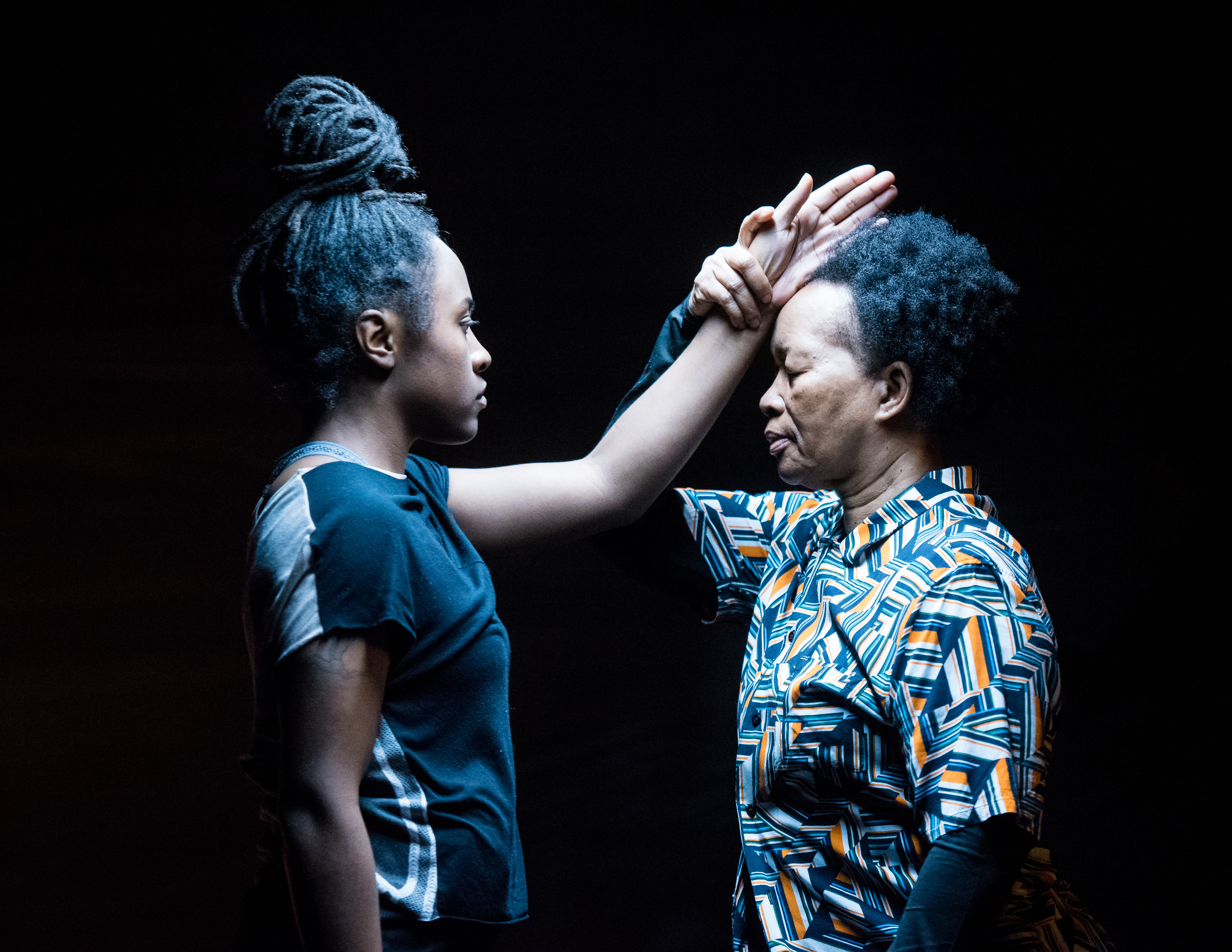 Bessie Award-winning performing artist Okwui Okpokwasili is the kind of brightly captivating person you could spend hours talking with upon first meeting. Warm, enthusiastic and so interested in learning about those around her an interview can easily turn 180 degrees. She also has the type of inquisitive mind that, the more deeply and specifically she probes into a subject, the more expansive and universal the connections she finds. Okpokwasili’s most recent multidisciplinary performance, “Poor People’s TV Room,” uses two historical events, the Nigerian “Women’s War” of 1929—a resistance against British colonial powers—and the kidnapping of hundreds of young women by Boko Haram, as points of inquiry into how bodies are used in political and protest practices. (“Poor People’s TV Room” runs April 12-15 at the MCA Stage. A screening of a documentary about Okpokwasili and her performance, “Bronx Gothic,” screens at the Museum of Contemporary Art on Sunday, April 22.)

How did these two historical events in Nigeria come together in this piece?
In 2014 I was thinking about the Bring Back Our Girls movement, excited because public recognition forced the Nigerian government to take action. But, at the same time, the structure of a meme is to erase the originating point, which speaks to African-ness, African-woman-ness, to somehow forget that there was agency. That something was built by a particular people. I started to think we have an idea that the African woman needs to be saved and is a victim. But then I thought how African women have been saving themselves and advocating for themselves forever. The Women’s War was in the South, it was a precursor to the anti-colonial struggle and was organized and carried out by women. I was interested in the ways collective action was a tradition in southeast Nigeria. That was a jumping-off point, but I don’t make documentary performance. Women came together and destroyed colonial outposts. The British set up commissions to interrogate and ask questions; I looked through the reports to get a sense of what the women were saying. But these were in translation, so access to that history was mediated in some way. I’m interested in the fragments and traces revealed in mediation. In the body and choreography, how do I find ways to make the conditions for the building of gestures that speak to what it means to be collectively engaged with one another, and build cellular histories. The piece really becomes a space between four women across three generations who imprint on each other, lean on, burden, ask each other who they are, where they come from. There’s a sense of the question of our existence and what is remembered and the flesh and actual bodies we hold. What we contain in ourselves, what we take from other bodies. It’s come into that space.

How has “Poor People’s TV Room” evolved for you?
This was a deep collaboration between my husband and creative partner Peter Born and I. In this piece we constructed the sound score together and he designed the space and the lights. The conditions of that collaboration are critical to what is made. The three women we’re working with built gestural vocabulary together. What has changed is how the material is sinking into the other women in the piece. They’re possessing more of it deeper and deeper the more we do it. When my husband and I set up prompts we want a liberated space, so we withhold certain types of information, because it’s not a linear piece. Sometimes we want to make sure we don’t fill collaborators with info we have, so that we don’t interrupt whatever journey they go on. I feel like the women in the piece are finding more roads to each other and are possessing it more deeply. We’re working with two performers who begin with a dance practice and one with a singing and theatrical practice, but we’re asking everyone to do everything. The opportunity to think of the dynamic of dancing with text and how that enriches the story, how the space enriches their story. They are opening up to the mysteries that come out of it. I think that the hope is when you’re collaborating with folks and you give them text they will possess it and let it become new when they say it. Every night something unexpected is happening. This is the thing about doing a tour of a piece at the intersection of multidisciplinary performance; there aren’t always a lot of spaces for it and it might only get a weekend. We began this tour in the Lumberyard in [Catskill,] New York in 2016. It feels like we’re getting this extended run that doesn’t normally happen for these kind of pieces.

In other interviews you’ve mentioned the activated, intimate space you wish to create with audiences. How are audiences responding?
“Bronx Gothic” was about creating a container and putting people in an uncomfortable proximity to each other and me. “Poor People’s TV Room” was commissioned for a proscenium stage. The challenge was how to create intimacy and an electric charge between performer and witness, and how to sustain it. I hope we have. It’s across the board…I don’t think audiences always know where they are and aren’t certain about what they’re watching. If they can let go of needing a narrative place they’ll be okay. I think people who hang on that won’t be okay. I feel that it’s imperative that we interrogate how we see and the way we see. In “Bronx Gothic” there was always my returning the gaze, what is the channel opening up in being seen and seeing each other. There are so many conditions under which a meaning of a relationship can be illuminated or shift. In all our pieces we’re trying to awaken these conditions so that people are opening themselves up to the ways the space is dictating the relationship. Why am I seeing this? Why am I choosing to look here instead of here? There are layers of sensing and awareness that we are using to make a world. Letting go and open up the multiplicity of ways of sensing.

Can you tell me the story behind the title?
It comes from a book called “Foreign Gods, Inc.” by Okey Ndibe, about the plight of an overeducated Nigerian immigrant driving a cab and having a hard time making ends meet. He decides to go back to his home village where he has an uncle who’s a powerful priest guarding a war object. At one point he reconnects with a childhood classmate who was mediocre in school and is now a government official who by graft and corruptions is not struggling at all and owns multiple homes. The main character asks how he’s giving back to the people and the official says he has a poor people’s TV room in his home; it’s air-conditioned and people can come and watch Michael Jordan highlights on VHS. As you approach big houses there are outer chambers and there are more interior spaces that bring you closer and closer to the person of the house. There are these powerful people who folks approach in supplication. I thought the room is interesting as a space of inertia and a projection of an aspirational space. I’ll be the next Michael Jordan, I’ll be the owner of the team. But will anyone come out of that room and do anything? They’re watching reruns, they’re not even watching what’s happening, they’re suspended in time. There are a lot of loops, there are feelings of time suspension. It’s a shout out to Nollywood, the third largest film industry in the world. As a space of cultural production by Nigerian folks for Nigerian folks, we do not have to pirate western movies. We can start myth-making of our own, we can take the reins of cultural production. It’s not without its complications but there’s a critical call within it.