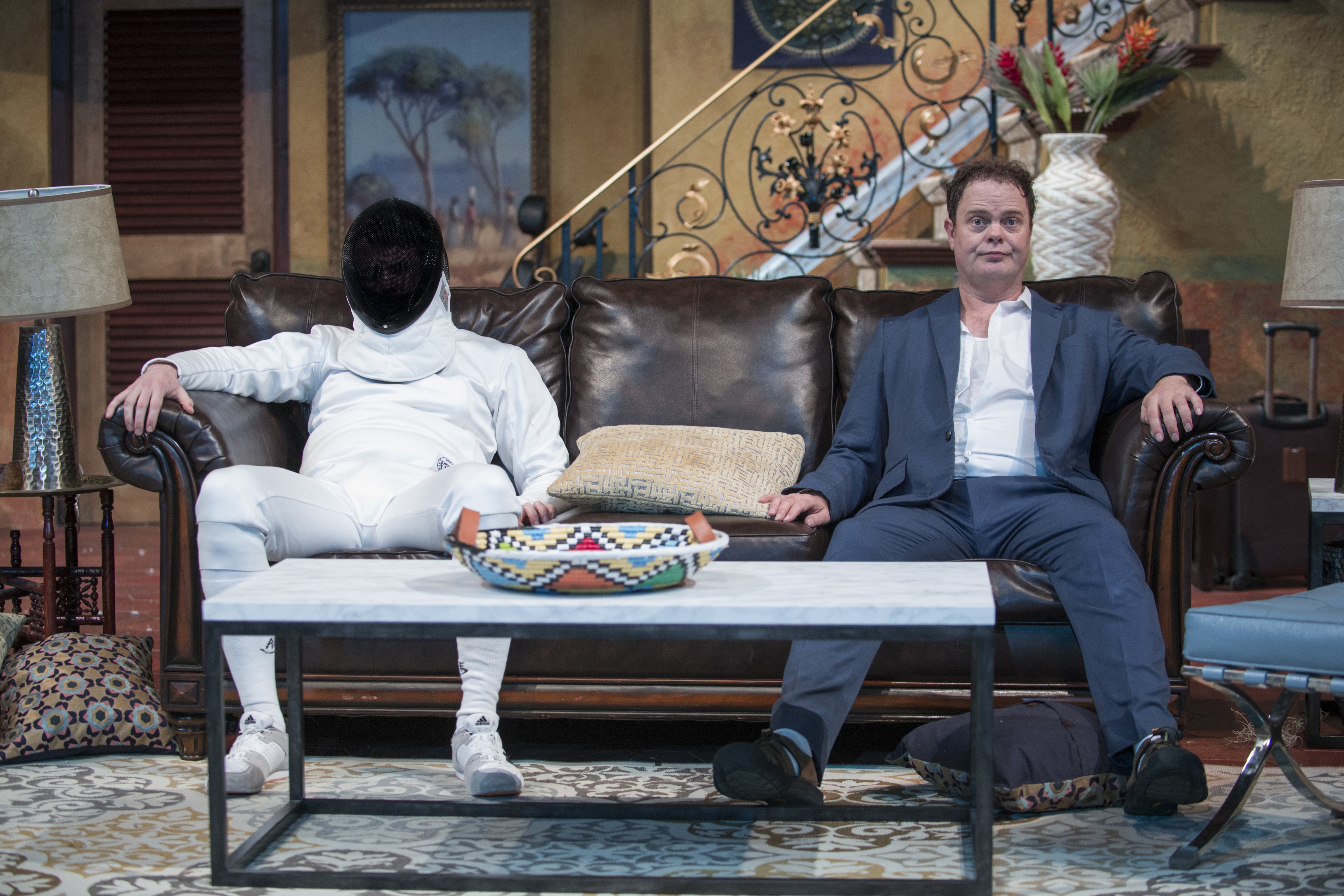 Matthew-Lee Erlbach’s “The Doppelgänger (an international farce)” announces its intentions almost immediately as the wealthy white owner of a copper mine in the Central African Republic complains to his maid about how nothing in her country works properly, from the government to the electric fans. An echo of “shithole nations,” that most sedimentary of racist sentiments, it’s almost as if the entire colonial history of England and America—the relentless plundering for the immense personal gain of a few that triggered the rapid expansion of global capitalist infrastructure—were dismissible objections, inconvenient opinions and minor impediments to the continued exploitation of vulnerable peoples, economies and nations whose demands are often just to be treated like human beings. And while we as Americans have become skilled at collectively performing the political choreography of pointing up the chain to those who we believe are pulling the levers, “The Doppelgänger” asks us, not so gently, to consider our part in this highly structured human catastrophe.

With satire there is always the question of who gets the wink and who gets the nudge, how fleet is the eyelid and how thorough is the ribbing. And while Erlbach has many targets in mind, from Saudi princes and deposed kings to English diplomats and American generals, the play’s broader message is one of collective responsibility and complicity. Hence why an everyman kindergarten teacher from suburban Illinois can conceivably (hysterically at first and then horrifyingly so) end up at the center of an international profiteering plot with immense global and local ramifications.

That the everyman in question is played by Rainn Wilson (who does double duty as the owner of the copper mine) sweetens this already ludicrously tempting honeypot. And while there were those of us who were disappointed when Gary Cole departed from the cast and the dual roles at the center of this play, Wilson is no slouch and he may bring just the right amount of star power to attract audiences currently locked into the Loop circuit. And it certainly doesn’t hurt that the whole thing is directed by Tina Landau; even the madness here must seem tame in comparison to her stint with “SpongeBob Square Pants.” With an ensemble that reflects Steppenwolf’s historic past and their pursuit of an even richer future (Ora Jones, James Vincent Meredith, Celeste M. Cooper, Sandra Marquez, Audrey Francis, Karen Rodriguez, Michael Accardo, Whit K. Lee, Andy Nagraj, Dan Plehal… you have to squint just to behold the glint of such immaculate brilliance), “The Doppelgänger” seems poised for enormous success.

What could possibly go wrong?

The essential question of any farce, the answer for the characters of the play and the production itself are as opposite as Wilson’s altering egos. Beginning with a mix up of medication and the arrival of a witless lookalike, Erlbach hurls us into this world and keeps up the breathlessly dizzying pace for the play’s two-hour-plus duration. “The Doppelgänger” is a whirlwind of slapstick (I have not seen so many people traverse staircases since “The Upstairs Concierge”), wordplay (“A coup!” “Bless you!”), colloquialisms made literal (these are both too good and too essential to the plot to give away), and non sequiturs (“No, I don’t want your gummy bears, you German!”). If this script doesn’t land Erlbach a writing gig on Armando Iannucci’s next project, I’m not sure what will. The tone of political comedy edging ever closer to tragedy is the “Veep” creator’s tea and biscuits. Before tonight, I was under the impression that no one could do it better. Erlbach has me rethinking this assumption.

Rethinking assumptions seems to be an ancillary goal of his play. While there is much to chuckle heartily about, Erlbach moves between objects of his rage and frustration with sniper-like accuracy, fragging targets from gentri-vacationers, the class of conscientious affluence with their New Age-y narcissism, the gun culture of the United States, the knee-jerk passivists of social media (“Happy to like, share or post!”), the hawks of Washington, and the fart-sniffers of Silicon Valley, just to name a few. The hardest jabs box the ears of those not destined to hear the play’s message though, even as he eviscerates individual groups, Erlbach maintains a steady eye on the overwhelming global totality of the issue at hand which is no less than the insatiable appetites of late capitalism.

The idea seems to be for we, the audience, to move willingly into his scope, to see ourselves as part of the problem. An admirable goal and a difficult needle to thread in the business of pleasing a fickle, moneyed class in an industry built on tax-deductible donations; I wonder how successful the play will be in this respect. Comedy has always been a sound vehicle for the delivery of truth but these days it is no less under the thumb of partisanship than drama. Erlbach never loses sight of the lives at stake behind his work; his humanitarian bonafides are locked in and his vision of theater is pleasingly progressive, as opposed to merely liberal. Still, “The Doppelgänger” brings about the question of how—or even if—theater can activate its audiences, motivating us to modify our behavior rather than simply entertaining moral quandaries and ethical scenarios.

I left the theater that evening—after the full force of the play’s terrific comedy was concentrated into a devastating emotional gut punch in the play’s final moment, a horrifying variation on the joke about plans and God’s laughter—wondering what it takes to hold onto such an experience. I thought about the play’s central character offering a defeatist summary of the events at hand, “It was fun while it lasted, like pogs, blue ketchup and the electoral college.” But I was also struck by a line at the beginning of the second act, spoken by Cooper’s maid, the character who is both the most politically insignificant and most essential to the story. “When I’m not fighting, you know what I’m doing?” she asks. “I’m fighting.”

Perhaps she is on to something. (Kevin Greene)