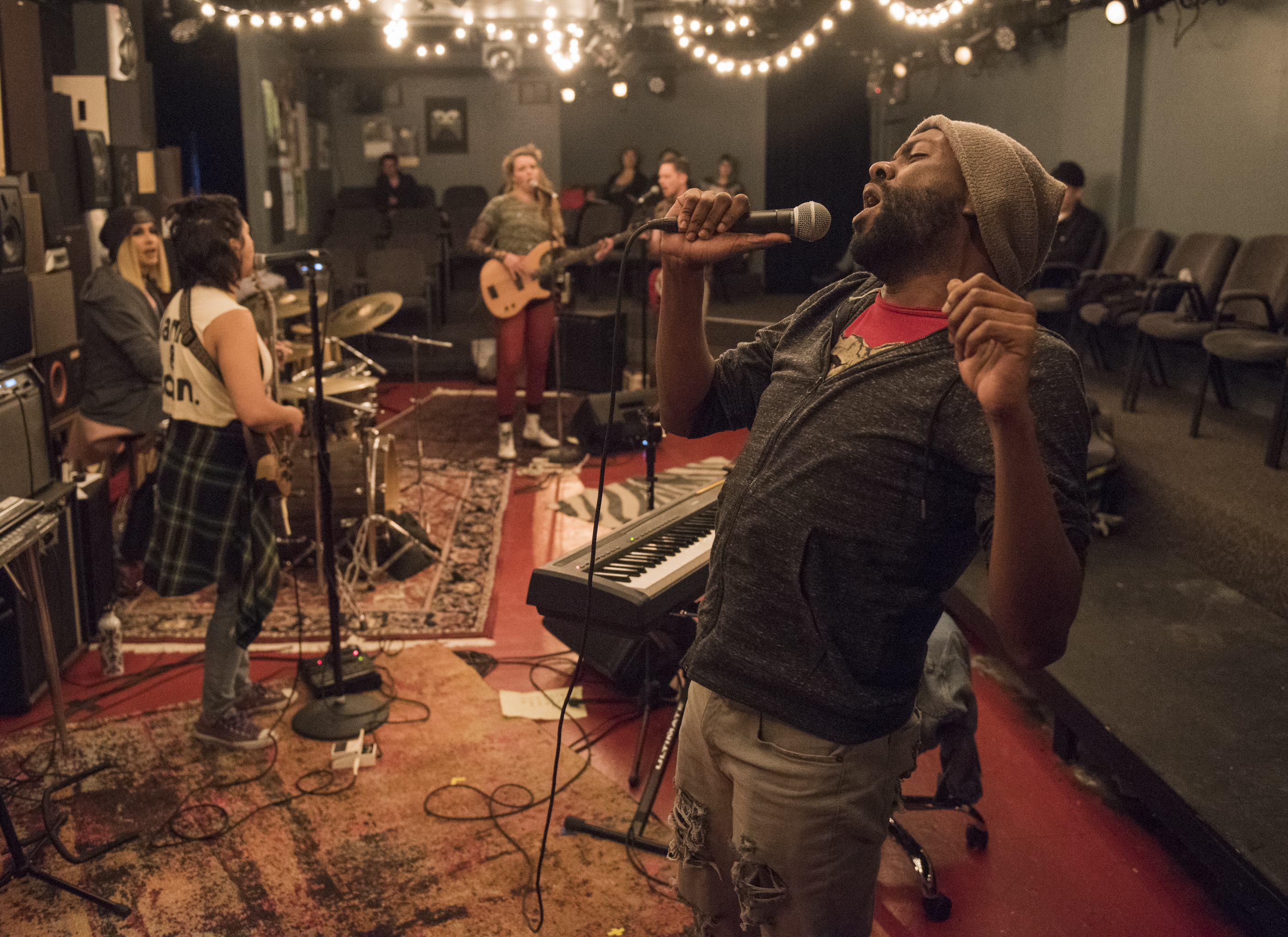 The cast of “33 to Nothing”/Photo: Michael Brosilow

There is illuminating synchronicity going on in the Chicago theater scene. Between Haven Theatre’s remount of “We’re Gonna Die,” Steep Theatre’s U.S. premiere of Simon Stephens’ “Birdland” and Grant James Varjas’ “33 to Nothing” at A Red Orchid, there is a momentary interest in the space between “straight” and musical theater as well the emotional specifics of cousin art forms.

As a person straddling both mediums, it’s fascinating to see how theater imagines and remakes the music world, as well as where the similarities of the two art forms overlap and where differences are most stark. Of the three shows, “33 to Nothing” is the most conceptual: it is set in real time during a band practice with non-incidental music that informs the relationships between the characters. In comparison to the other two, as well as the dramatic and expressive potential of a theater-music hybrid, it also offers the least insight into the creative process and doggedly adheres to tired stereotypes of musicians.

A Red Orchid’s space is too small to accommodate oversized personalities. They become cumbersome, hulking about as if in an inflatable human-shaped suit. Aaron Holland plays Gray, the self-destructive front-man of this unnamed band, equal parts salt and snark. When he is not busy drowning himself in vodka he sings (beautifully) about his failed relationship with Bri (Steve Haggard), one of two guitarists. If this sounds awkward, strap in because things only get more uncomfortable. Their relationship is somehow constantly being acknowledged and never being dealt with, due in part to Gray’s emotional slipperiness and the band’s enabling silence. There is plenty of bickering and sniping, most of it petty and plenty of it barbed by betrayal. Still, it’s a case of talking a lot but not saying much. The characters here seem to only have two speeds: repressed silence or loquacious fury. Within this dynamic, subtlety sees itself out.

The music serves as reprieve, although your pleasure with it will depend on your penchant for the piano-based ballad rock of the seventies and eighties. Varjas’ influences are currently unfashionable, which is refreshing, though confusing in a contemporary setting such as this one. Bar rock of this variety has not punctured the mainstream music world since The Hold Steady peaked over a decade ago. It’s hard to parse why a group as young as this would be so dedicated to music older than they are (Frank Ocean is the only contemporary artist in an onslaught of name-dropping that happens throughout the play). Even given current nostalgic fixations that find kids barely old enough to drink riffing on Weezer with preternatural ease, the choice begs for justification that it never gets.

Individual tastes and plausibility aside, “33 to Nothing” feels out of touch with how contemporary music is made, shared and experienced. Navel-gazing toward an era of sex, drugs and rock ‘n’ roll feels like indulgence without illumination. Those who made it out of this period of music history alive have almost exclusively painted themselves into obsolescence. Those who didn’t have lost their appeal as youth icons, possibly for the best when you consider how many of them perished. But that’s the kind of rock ‘n’ roll on display here, musically and characteristically speaking. You can practically see the dust settling.

As for what that means for the characters involved, I felt only a shrugging ambivalence. They don’t appear to believe in themselves or each other, so why should I?

What “33 to Nothing” needs is stakes. Even considering the vicarious thrill of reliving some since-lost (or perhaps never-existent) glory, or the perpetual delay of adulthood familiar to many folks in their late-twenties and early-thirties, I still found myself at a loss to explain why this band would persist, not because of a lack of collective ability but for sheer intolerable cruelty. Perhaps if they were on the verge of a real breakthrough and not the sour promise of another brief tour or string of increasingly under-attended gigs or makeup sex or one more drink, I might have been moved to be supportive. But when one character turns to another, in a moment of sincere expression that the show is badly lacking, after making an announcement that will alter the band’s future —or lack thereof— and asks, “We’re doing the right thing, right?” I wanted to scream “Of course you are!” The getting’s no longer any good but it’s still worth getting gone.

With so little on the line dramatically and so much working against it, “33 to Nothing” becomes a showcase solely for the interdisciplinary talents of its ensemble. However, as anyone in the business of making art will tell you, talent is not enough. Purpose and motivation are what drive artists out beyond the county line of reason, leaving friends and loved ones, nine-to-fives and credit scores in the rear-view. Success validates the risks that artists take. In its absence, a swell of melancholy and disillusion can arise. “33 to Nothing” captures this sensation well, but without the contrast of collective pride in chances taken and ambitions, however modest, brought to fruition, the result feels lopsidedly cynical. (Kevin Greene)