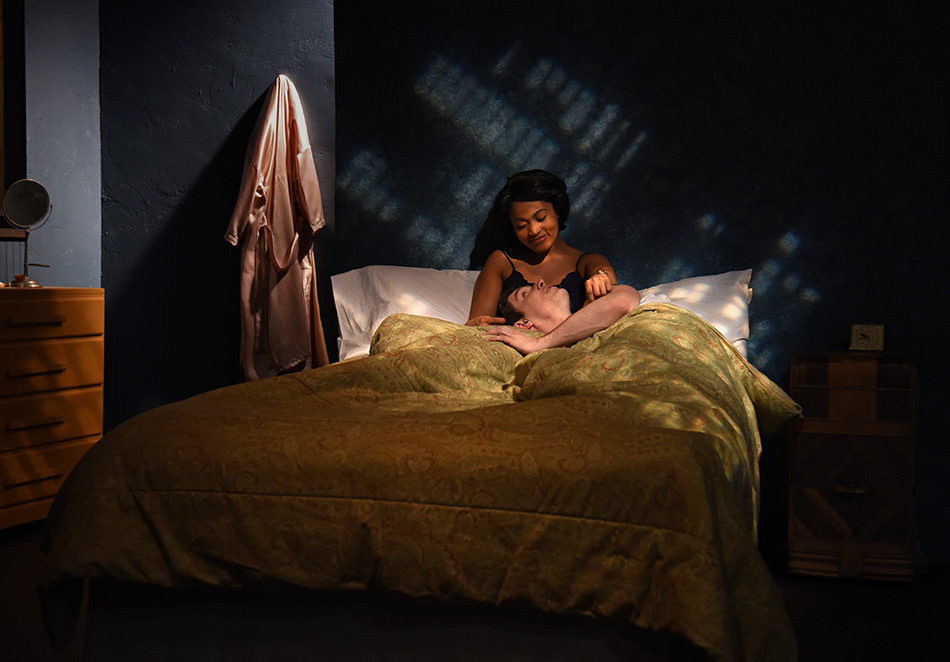 Early one morning, Sue (Diana Coates) regards the scene outside her apartment window, as her lover Bernie (Luke Daigle) lolls in bed. It’s Chicago, December 1962. Sue is a successful department store buyer. She pays the rent on the apartment, and she makes Bernie the French toast and coffee he wants for breakfast—she even throws in some bacon. “Life can be ugly sometimes,” she says. Bernie, an ex-bartender now not making a living not selling cars, who wears the cashmere Sue buys for him, eats the meat Sue cooks for him, washes in the tub Sue scrubs for him, sleeps in the bed Sue makes for him, sleeps with the floozy across the hall when he feels like it, and threatens to beat Sue up when she suggests settling down, thinks she’s being dramatic. “You can tell everyone else to go to hell if ya feel like it,” he says to her. “You got pretty far for a woman.”

One of his lesser-performed works, “Natural Affection” was said by William Inge to have been inspired by a senseless act of violence reported in the newspaper. There is violence in this play—the shocking sort of physical violence to which its 1963 audience objected—but also the mundane emotional violence that more commonly finds its mode of reportage in works of so-called fiction. This particular violence emerges with crystalline lucidity in “Natural Affection,” which observes the breakdown of Sue’s tenuously constructed life when her illegitimate teenage son, Donnie (Terry Bell), comes home from the work farm where he’s been sent for stealing a car and beating up a woman.

The events in the play can be simply characterized as the seeking and refusal of affection, but the details cut like razors: the way Donnie stutters and trembles when he gives his mother a gift, his childish optimism for new clothes and perhaps a new job, his rivalry with Bernie, how Sue tells him he smells just like the disinfectant in the air of the orphanage where he was raised. Everyone in this play is an addict, stuck on desires that can never be sated. “I wish I could have written a comedy, but I couldn’t at the time,” wrote Inge. (Irene Hsiao)