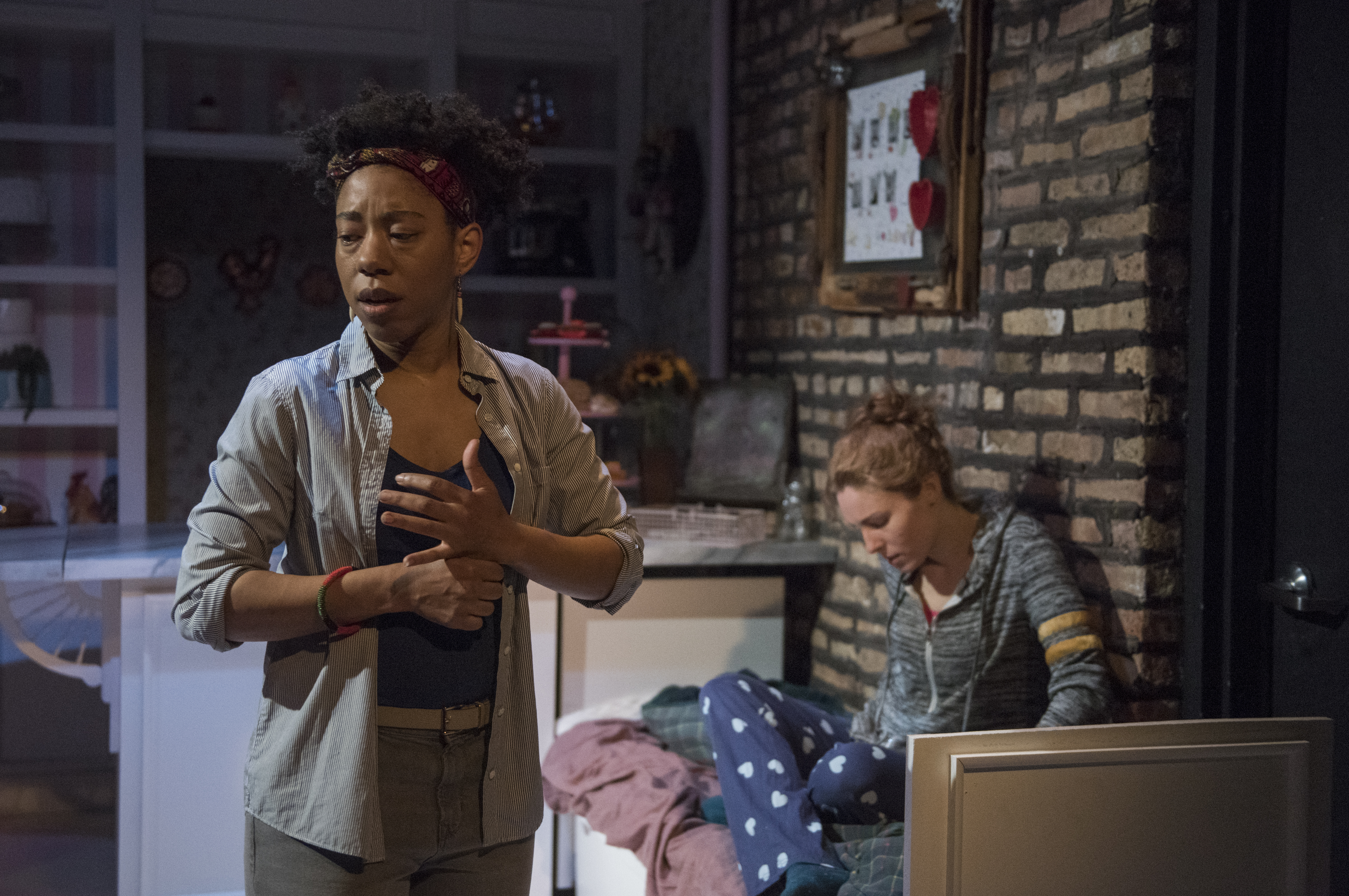 The world is full of do-gooders and well-meaners encouraging folks to “meet in the middle,” that hypothetical, utopian median where everyone can have their cake and maybe even eat it too. But the political spectrum is not linear. It’s three dimensional with axes that extend toward infinity. The middle is relative, a point in the distance beyond which are Nazis or antifa or Bernie bros or your ornery progeny with their confounding new pronouns or your co-worker Karen and her flavorless potato salad. Belief, like taste, is subjective.

“The Cake,” in its Midwestern premiere at Rivendell Theatre Ensemble, is designed as a treat for those with less appealing fare on their plate. Intellectually and emotionally it is as nutritious as its namesake, a distorted over-correction of the contemporary liberal view by which many see conservatives performing an increasingly farcical and dangerous dance, a blind-folded knife-thrower doing target practice on democratic integrity. It is not easy to swallow this saccharine serving: a chipper, Jesus-loving baker abstains from making a wedding cake for a young woman—a family friend with whom she has an intimate connection—who is getting married to another woman. Harder still to stomach are the lengths that playwright Bekah Brunstetter goes to legitimize the viewpoint of this unrepentant bigot, often at the cost of characters who deserve to be seen, treated and written as full human beings and not the inciting incident of an immoral crisis.

This legwork begins by making sure we know that Macy (Krystel McNeil), one half of the couple in question, is a knee-jerk, reactionary liberal, espousing her sanctimonious opinions unprompted. Gluten-free, politically pushy and overtly condescending, Macy has all the depth of a bumper sticker ripped from the back of a pickup truck in coal country. Her partner, Jen (Tuckie White), by contrast, is agreeable to a fault. Jen was raised in North Carolina and has returned to get married there, at least in part to please the spirit of her deceased mother. When she attempts to enlist Della (Tara Mallen) to bake the cake in question, the good-natured baker demurs, citing a busy schedule. The play persists beyond this point due in part to Jen’s stubborn nature and Macy’s poor decision-making, but mostly through an overwhelming desire to make sure we understand the extent of Della’s internal conflict.

“The Cake” very obviously attempts to equate things that are separated by orders of magnitude. Macy’s judgmental attitude toward a culture that objects to her right (the play takes place after the landmark Supreme Court decision of 2015) to marry another woman and whose predecessors felt entitled to own her ancestors is meant as aggressive counterpoint to Della’s hen-ish hesitance, grounded in religious objection. At one point Macy fat-shames Della, asserting that her body is her own fault. And while body-shaming is reprehensible, it is not equivalent to homophobia. There is no secret queer agenda to punish, control and potentially kill people with diabetes by banning insulin on the grounds of some ancient text that declares high fructose corn syrup and confectionery sugar to be the fuel of degenerates. However, conservatives—significant numbers of whom are white, heterosexual, cis-gendered, and Christian or a combination thereof—have made and continue to make countless attempts to infringe and reduce the rights of oppressed groups often using as justification a collection of millennia-old stories written exclusively by men in order to enforce patriarchal norms of devotion and fidelity as well as to punish anyone who falls outside of these behaviors and practices.

This is where the Dellas—and perhaps the Bekahs—of the world lack perspective. Their privilege has become a forest for which they can no longer perceive the trees, if they ever could. Della—who is an effective stand-in for American attitudes about liberty and freedom, namely that they are constantly under attack—wants the right to do whatever she pleases but has no issue participating, especially passively, in a system that deprives others of those same rights. Within this system, there is no balance because gravity is an exertion, by proximity, of privilege. Any attempt to place on a level playing the possessors of privilege against the dispossessed, disenfranchised and diasporic erases the appearance of privilege without actually addressing it. Inequality is not a scale, it’s a wall. It needs to be dismantled, not rationalized, the way Brunstetter attempts to do.

The validating of this kind of bigotry—which the play does not only in its agree-to-disagree final moment but throughout its duration as it seeks to qualify Della’s attitudes toward homosexuality—is an enormously privileged thing to do. Promoting the repressed anxieties of religious white women over a truly balanced conversation about the state of privilege and the types of identities (intersectional or otherwise) that are never safe or supported in America reflects a blind spot in Rivendell’s mission. Concealed as a light delight, this “Cake,” much like the real thing, is an indulgence that not everyone can afford. (Kevin Greene)