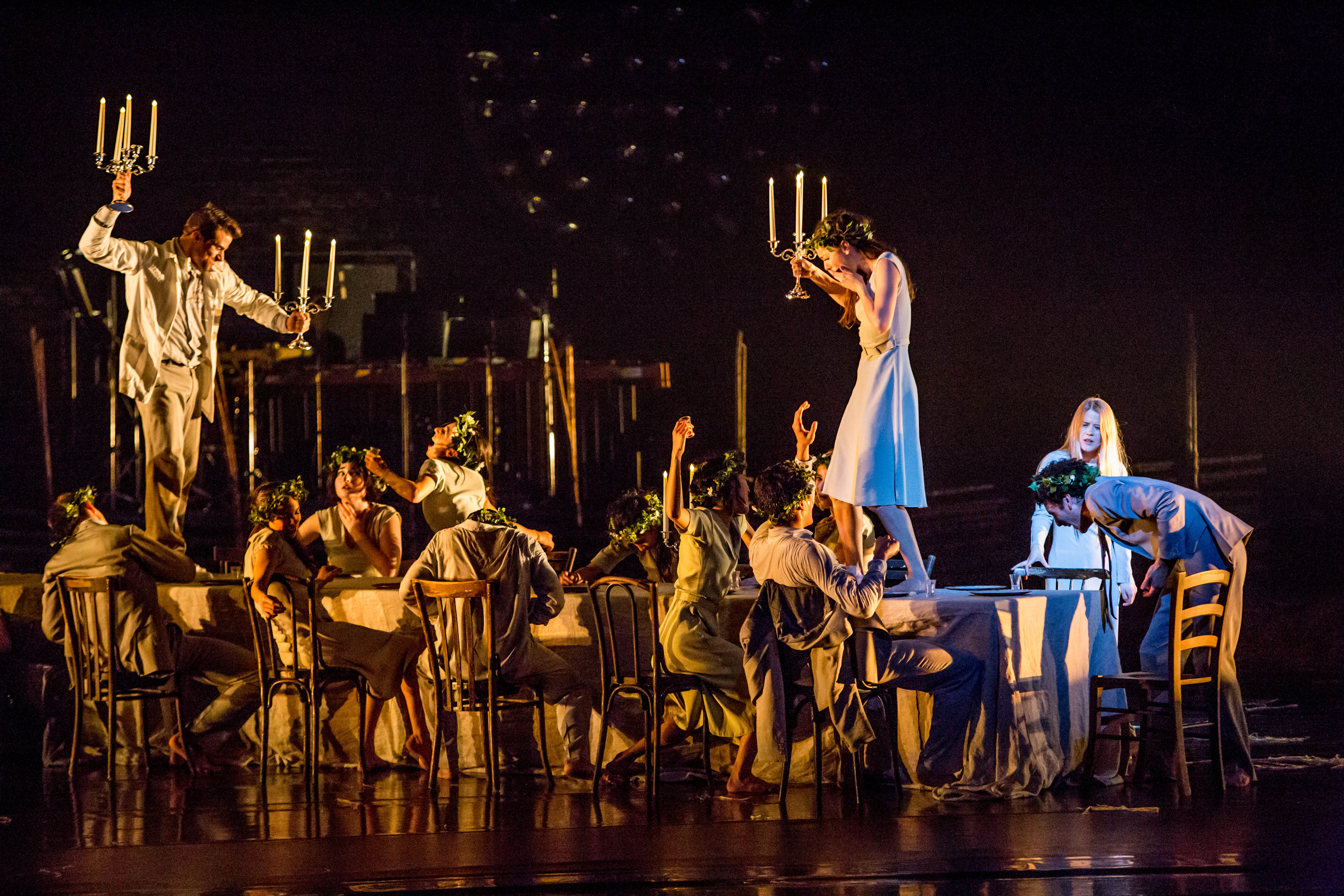 In the closing soliloquy of “A Midsummer Night’s Dream,” Puck entreats the audience to not judge too harshly the play they just witnessed for its whimsicality and lack of substance. And while Alexander Ekman’s evening-length ballet of the same title intentionally bears no resemblance to Shakespeare’s comedy, I find myself reflecting on that humble enjoiner to not reprimand a “weak and idle theme.” The Joffrey Ballet debuted Ekman’s production, originally created for the Swedish Royal Ballet in 2015, Wednesday night, fueled by a particularly enticing marketing campaign of dancers in suits frolicking through golden-lit fields and social media video teasers setting audience expectations for something completely different. Ekman’s ballet has no narrative per se, but is thick with imagery, a love letter to the Scandinavian solstice, set at first in the daytime, then the night of the longest day.

The atmosphere in the Auditorium Theatre fills the house before the curtain rises, green light projected on the golden arches of the ceiling creating a verdigris canopy above the seats, strung with patio lights. Birds chirp, flirtatious phrases are projected in cursive on the curtain, and dancer Temur Suluashvili slumbers in a white, metal-framed bed situated downstage. The table is set to entice, to pique sensory pleasure. When Suluashvili is awakened by Victoria Jaiani and led upstage, the curtain rises on a spectacular scene: the entire company kneeling on a stage strewn thick with hay, threshing and tossing it in great arcs overhead, their joyful whoops punctuating Mikael Karlsson’s score, played live by members of the Chicago Philharmonic and percussionist Niklas Brommare, all seated far upstage. Nostalgic and contemporary aesthetics commingle—the cast is dressed in gray-green cotton suits and house dresses that evoke the mid-to-early twentieth century, but a digital clock overhead marks a date in the near future: Friday, June 20, 2018. The passage of the day is marked not only by the clock, but by a sun comprised of a cluster of spotlights that changes hue as it travels across the stage. We see images of harvest, sack races, Maypole dancing, and other midsummer festival merriment, including plenty of feasting and imbibing. Swedish indie-pop singer Anna von Hausswolff wanders the stage as well, her birdlike voice layering atop the rich atmosphere. The dancers transform the stage throughout the first act, rolling giant hay bales, dashing to and fro under black umbrellas, comically gathering beneath and moving about a party tent. Act one ends with the sun setting above a party that has devolved into slow-motion debauchery: revelers pairing off and stripping down or dragging off passed-out partners by the ankles, dancers spilling down the aisles candelabras in hand, as the theater darkens, and Suluashvili climbs back into bed.

The second act opens on a dreamworld created by a night of overindulgence. Surreal images that toe the line between horror and comedy (and a few that evoked certain creepily funny Monty Python sketches…at least for me) drop from the flies, dance, lumber and roll across the stage. Many familiar nightmare scenarios make an appearance: falling from a great height, forgetting your pants, speaking in gibberish. The clock overhead moves back in time, then loses track of time entirely. The sequences went on for quite a while, to the point that imagery at first deliciously strange would begin to wear thin and eventually wind up reduced to a joke. When the ensemble reappears their day clothes are gone and they are clad in nude undergarments, the women with oversized button-down shirts, their long hair flowing loose, their formerly bare feet now in pointe shoes. Von Hausswolff returns too, her song eerie and repetitive. There are plenty of visual gags (including a pun using a recurring surreal image and the name of a popular ballet lift—an Easter egg for those in the know) and yet the most successful moments are when things get unabashedly, inexplicably weird.

Ekman’s “Midsummer” is a triumph of vision, imagination and masterful stagecraft. And yet I found it wanting on two counts. One, the dancers of the Joffrey Ballet, while wholly committed and clearly having a splendid time, seemed woefully underutilized. In large-scale productions, human movement runs the risk of being overshadowed by splashy set design. In “Midsummer,” dance most often took a visual backseat to trees suspended upside down and setpieces descending into the orchestra pit. And two, I kept finding myself reaching for something in the production beneath the surface: a base element, a theme less weak and idle, a beating heart. The characters which appeared and, in some cases, reappeared in a different form still felt disconnected, the dance sections within the acts disjointed, the underpinning spirit insubstantial. But it’s likely I was seeking something left out by design. We search for hidden meaning in dreams but, more often than not, they are simply accumulations from our day distorted by too much wine and the anxieties that lurk in the recesses of our brains. Ekman’s “Midsummer” is unquestionably an entertaining spectacle and he seduces the audience into a very diverting dream. Perhaps that’s enough. (Sharon Hoyer)