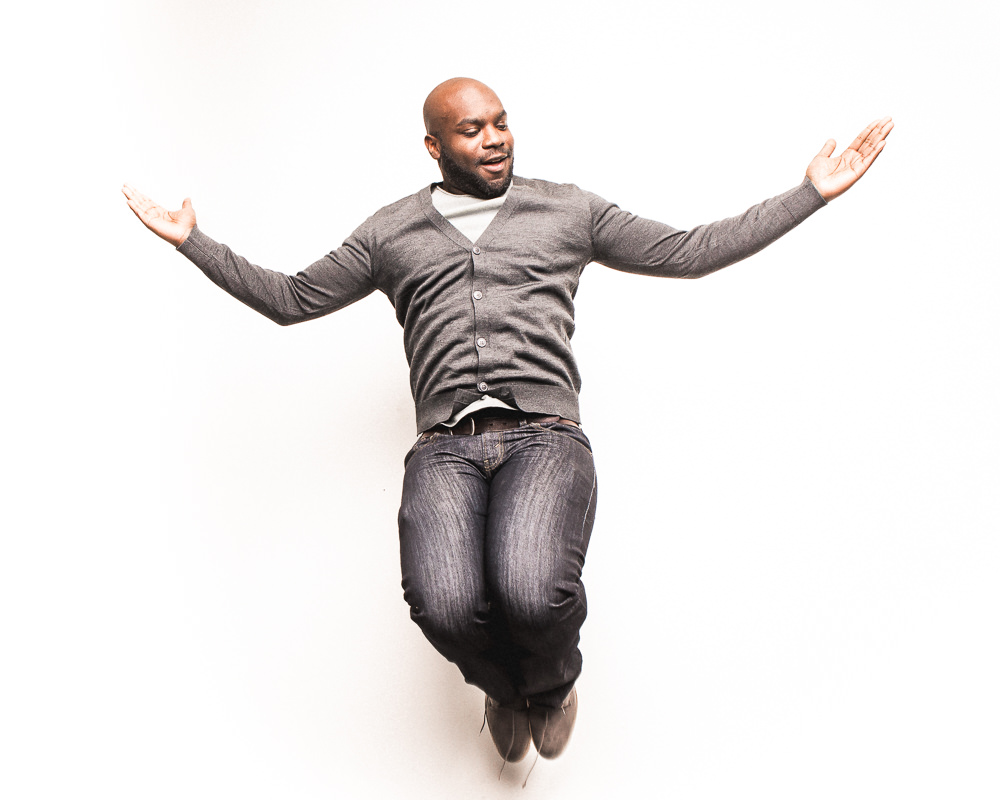 “That word gets thrown a lot and it means a lot of things. All I’m doing is literally the least I can do.”

I was sitting across the table from prolific playwright Ike Holter at Steppenwolf’s Front Bar, sipping white wine on the rocks like characters out of a sitcom about theater people. I had asked him about writing through the lens of artistic activism when he dropped this gem of truth. 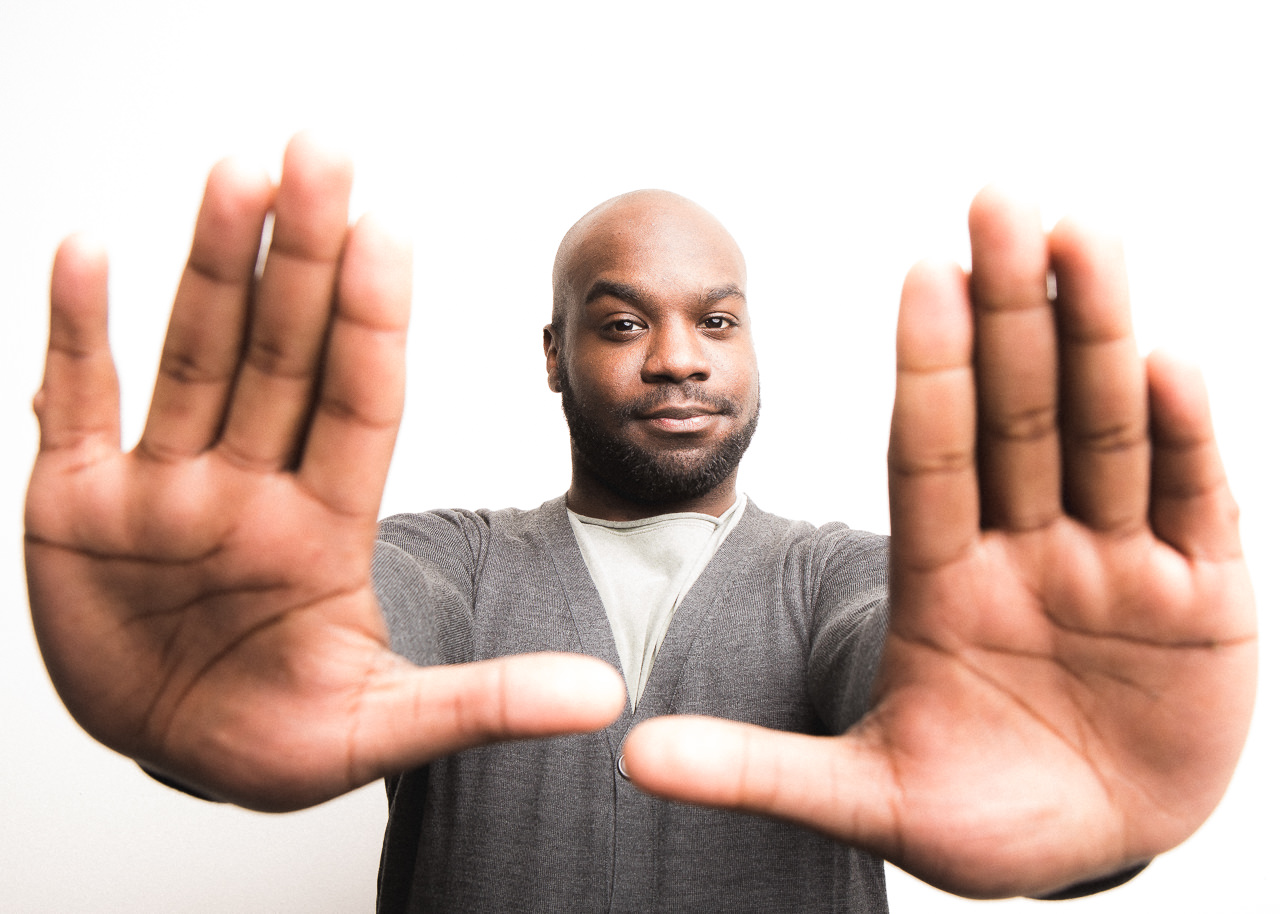 “If everyone does the least they can do,” Holter says, “things can change very quickly. I don’t think it’s a big deal to say things like ‘If you’re supposed to employ a person of color for this role and instead you get a white guy to do it, you’re refusing to give a job to a brown person.’ It’s a fact, it’s what’s happening. I don’t think it’s a big deal to say, ‘There should be more women working in this place because they’re half the population.’ I don’t think it’s weird to talk about this stuff, I only think it’s weird when people refuse. It’s 2018. If we don’t talk about these issues, they keep happening and people keep getting hurt, so the easy thing to do, actually, is listen and try to fix stuff. And everybody messes up, and that’s okay, too, because we’ve never talked about this stuff before and we all screw up.”

Holter is a nationally renowned playwright. In Chicago, his work has been produced by companies as modest as Nothing Without a Company and as overwhelmingly well-funded as the Goodman. His snappy dialogue has filled theaters in New York, Milwaukee, Washington, D.C. and Texas. He’s the recipient of multiple awards, not the least of which is the Windham-Campbell Prize, which he was granted in 2017.

Holter could write anywhere, but he chose Chicago, and the artistic community here is rightfully very proud of him. Originally hailing from Minneapolis, Holter is a Midwest man through and through. And he’s not shy about hailing the Midwest’s greatest city for the art incubator that it is.

“I think Chicago is the best place for new plays, I mean, whether that’s fact or fiction, debate about it, whatever, but it’s my hands-down favorite place for new shows because the audiences really care and they get it,” he says. “There’s not a lot of pretension about going to different theaters or spaces or seeing a show in a bar or a basement. If something is good, people will find a way to get into it. The artists see each other’s work and support it, loudly. I think you can get a lot of stuff done if you treat people like peers instead of pretending competition is an important part of making stuff. It’s not. Our audiences will see a big show at a big theater and then read about a small storefront doing its first show and get excited about that, too. I think that’s rare and I think that’s awesome.”

Chicago’s audiences are a force to be reckoned with indeed. And when you combine that power with the cultivation of civic dialogue that Chicago arts administrators and artists have created in the past few years, it’s easy to see why this is Holter’s home base. Chicago is the city of Not In Our House, The Chicago Inclusion Project and the Chicago Theater Accountability Coalition. We are a city on a mission for inclusive, thoughtful and political art, in all senses of those words. 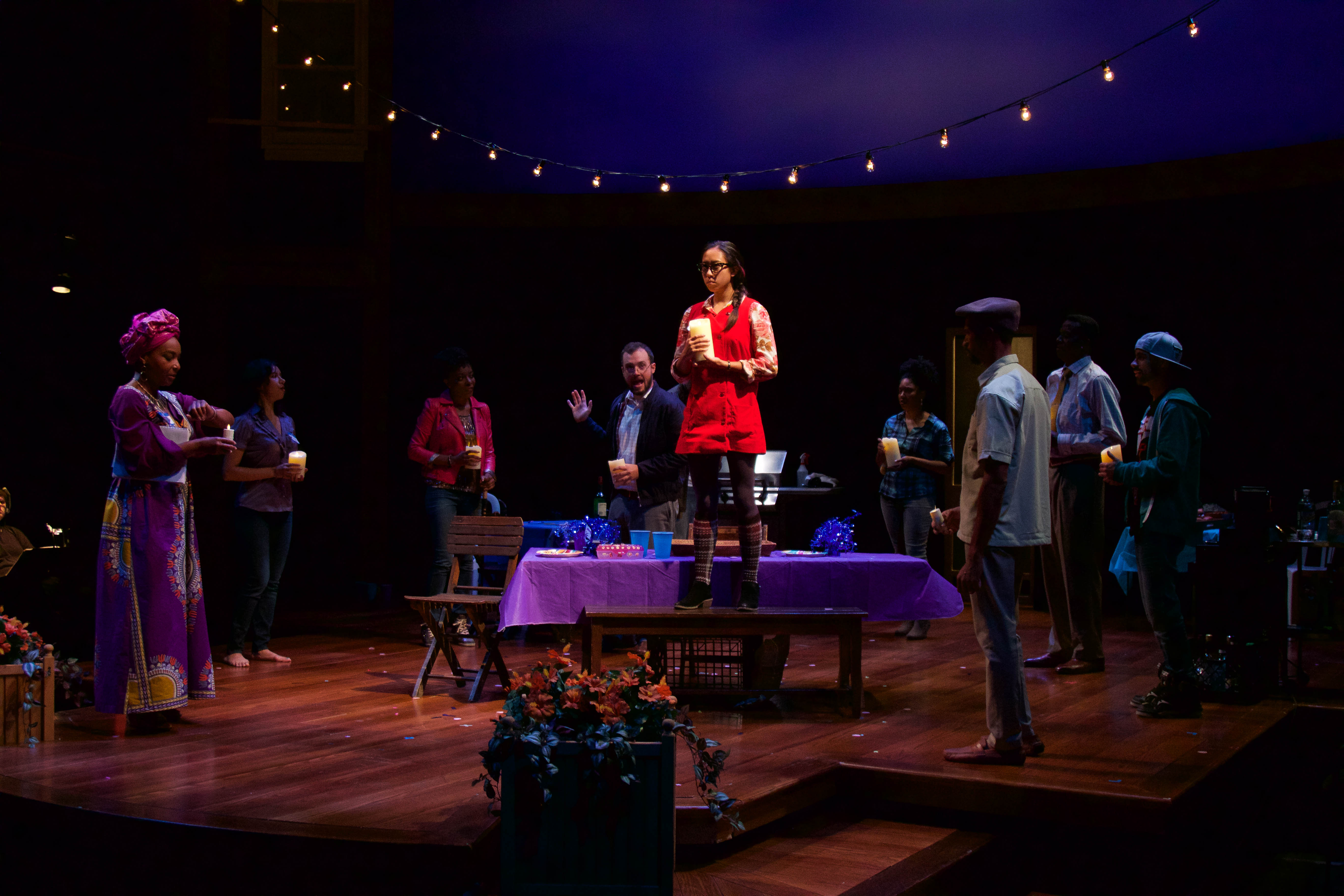 For Holter, the push for inclusion is a matter of course: the least we can do. But watching the sea-change is thrilling.  “I always get really excited when I’m not the only person that looks like me behind the table,” he says. “Working on ‘Lottery Day’ with Lili-Anne Brown for the last year has been awesome because we both push to get great people and a lot of those great people happen to be of color. When the people behind the table match what’s in front of it, I think it’s awesome. Working on ‘Rightlynd’ with Victory Gardens has been great, too, because I realized during our first workshop that there was only one person in the room who was white. Everyone else—the entire cast, director, writer, casting director, artistic director—we were all of color. And we sat down to read this play and I remember being really moved because something like that had never happened to me before. I’ve never been in a room where everyone was a person of color, minus one person. I’ve been on the flip side so many times. People of color are oftentimes disregarded in theaters. The best way to change that is just by filling the room with the best people. This is Chicago, we’re over sixty percent people of color, so if there’s a room where someone is doing a show and no one behind the table is of color, I gotta think that’s an intentional choice to not seek out quality. We’re out here, there are a lot of us, and we get shit done.”

And there’s a lot of work to be done. Many theaters are still operating on the “slot” model (“Like ‘this is our woman’s slot, this is our man of color slot.’ [It’s] pretty blatant.”) though there are a few institutions that are eliminating that philosophy. Victory Gardens, for instance, has not produced a play written by a white man since “Hand To God” in 2016.

“When you tell people there’s only so many chances for them to get work,” Holter says, ”it encourages people to in-fight and tear each other down. I honestly think that’s the plan. But I came up getting advice and friendship and real talk with people like Marco Ramirez, Tanya Saracho, Caitlin Parrish, Idris Goodwin and Tarell McCraney and they all refused to play any game. They made sure to lift people of color up any chance they could. They fought for me and that encouraged me to fight for other people. It’s a pass-down system. They’ve pushed me for jobs they’ve turned down, and recently I’ve been able to do that for other people like it was done for me. There are always going to be people who thrive in scarcity, believing they’re the only one, but the only way we get better is by moving together, as one big group of people, and leaving the door open as many times as possible. Instead of fighting over ‘one slot for one play written by a woman’ it’s like ‘Why can’t the whole season be by women writers?’ There have been hundreds of seasons filled with just all white dudes. Instead of fitting into some mold made for us by old white dudes, we can blow it open if we keep in touch and fight for each other.”

Representation onstage, in administration and behind the table isn’t just about hiring practices. It’s about the philosophy that theater is an exercise in mutual empathy. “The Washington Post released this great study that showed three-quarters of white Americans [have] no friends of color,” Holter tells me. “That means for many people, seeing a TV show or a movie or a play that has non-white people in it may be their only chance, for months, to see someone not like them. Showing incredible brown and black people just living their lives is itself a political act, especially when a lot of theaters only put our stories onstage when it’s the month of February or if [the play] is about struggle or suffering or oppression. There are awesome stories written about all of those topics, they are all worthy of discussion, but sometimes it’s important to just see a romantic comedy with two queer people that doesn’t involve a coming-out story. Or a thriller where one of the characters is a woman running a company and calling all the shots and nobody comments on that. Or seeing a world where we have just as many ups and downs and genre twists as any story with all white people. One of my shows had a queer couple in it and a lot of the audience members kept asking why they didn’t talk about getting teased or bullied or coming out. I was like, ‘These people are dealing with the end of the world, I’m not sure they’re focused on backstory when they’re fighting to survive.’ But for some people, they just assume that’s what queer people do: talk about how they don’t fit in, all the time. That’s weird. Just letting people exist in different narratives without always talking about how white people view them is essential for me.”

Pushing back against what historically white institutions expect from a writer of color has been an ongoing struggle in Holter’s career. He shared a story about a theater that commissioned a play from him and was disappointed when he gave them a modern thriller rather than a historical epic about the oppression of black people. 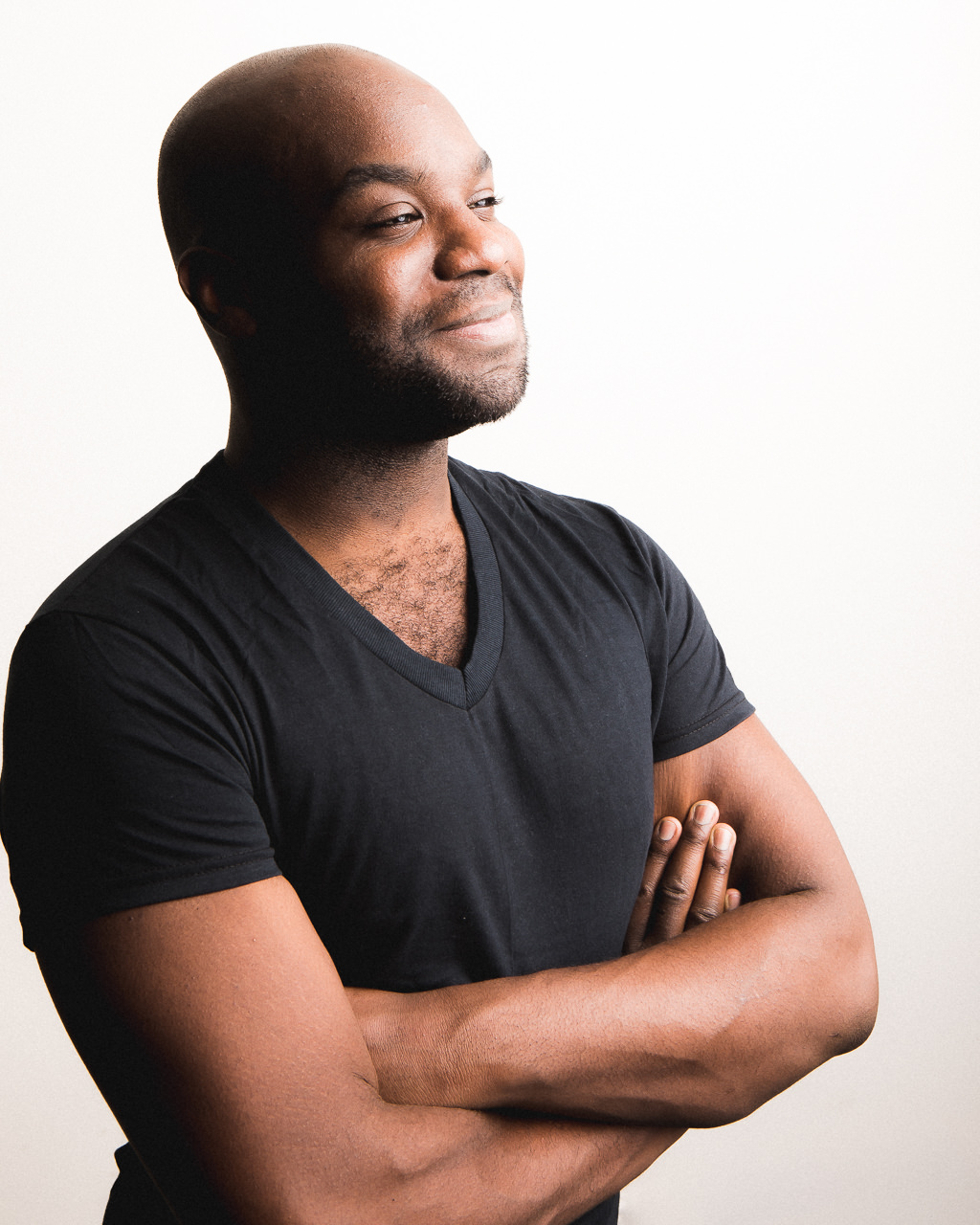 Holter is working to break those expectations. He’s constantly playing with genre. His play “Prowess” was modeled after Marvel movies. The pop-up production of “Put Your House In Order” was inspired by nineties thrillers. His diversity of style doesn’t hurt his consistency as a writer. He has an undeniable voice. He’s created a series of stories set in the same fictional neighborhood in Chicago, Rightlynd, which will conclude in the 2018/19 season with plays at Victory Gardens (“Rightlynd”), Steep Theatre (“Red Rex”), and the Goodman (“Lottery Day”). This year has already seen the remount of “The Wolf at the End of The Block” at 16th Street Theater in Berwyn as well as the world premiere of “The Light Fantastic,” an old-school horror story made new, at Jackalope Theatre.

How did Holter’s Rightlynd saga happen? We have Jackalope Theatre to thank for that.

“Jackalope was one of the first companies in Chicago to believe in my work and take a risk on producing me,” says Holter. “One of the first commissions I ever had was to write ‘Exit Strategy.’ That commission paid for my rent for a month and it saved my life and we all got to work on a play ’cause we trusted each other. I created a big world around the play ’cause I wanted the story to feel real. I picked a lot of different pieces of Chicago and put them together and made up a fifty-first ward that runs alongside our fifty, with its own alderman and its own general store and its own theater and its own politics and people. So whenever I got another commission in Chicago I would go back to that neighborhood and fill it in more. When they’re all done, I think all seven shows, if ever watched one after the other, will tell a big story about how a neighborhood goes from thriving to fighting to surviving to becoming something much, much different than it was before. All the stories are about people fighting for a kind of protection of that place and often failing and becoming what they despise. It’s been awesome working with different directors and designers and actors on it, because we all live here and are pushing this story together.”

Perhaps that’s the strongest reason behind our city’s love of Ike Holter. He’s given us a voice, a style, and a saga that pushes back against the “gritty,” “white man angrily throws chair” theater reputation we’ve had for years. I, for one, couldn’t be more grateful.