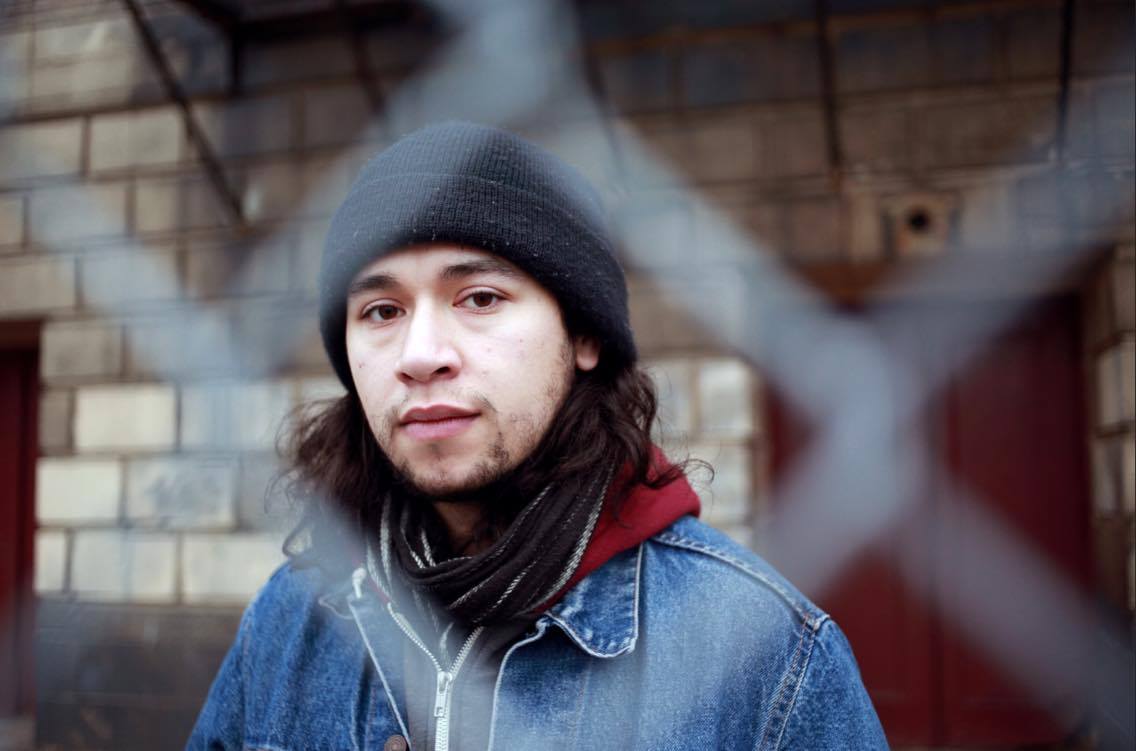 In “The Scavengers” (2014), a play produced while Baisch was working on his BFA at the Theatre School at DePaul University and directed by Bonnie Metzgar, garbage spills from all corners of the stage. It’s not just part of the world, it is the world. In it, three siblings navigate a city that is both post-apocalyptic and familiar, while an older woman and her caregiver build effigies out of surrounding ephemera. The siblings, each in a state of barely functional emotional disrepair after being abandoned by their parents some years earlier, still muster enough energy to cause each other and themselves pain.

It’s like kitchen-sink drama, only exploded, corroded and tossed into a junkyard. 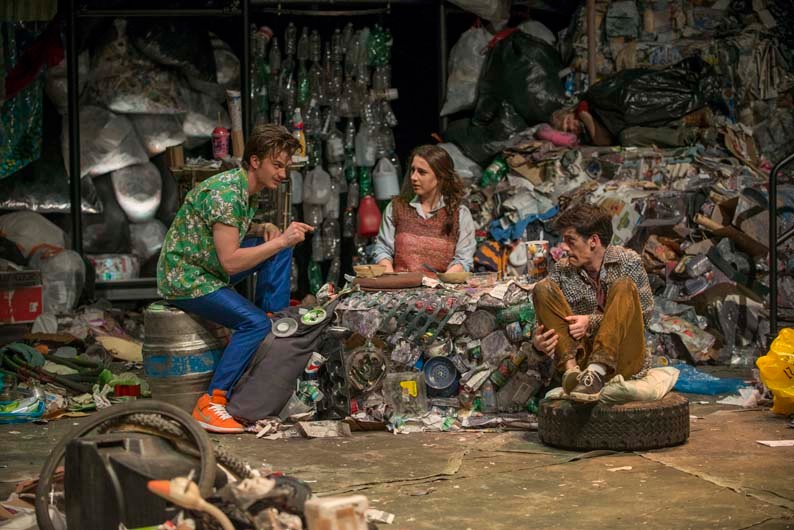 Joe Keery, Ashlyn Lozano and Sam Haines in “The Scavengers” at The Theatre School at DePaul University/Photo: Michael Brosilow

A multidisciplinary artist who takes inspiration from the world of high art, internet culture and everything in between, Baisch’s voracious appetite produces work that is greater than the sum of its individual parts, more multiplication than addition.

“Basically, I try to collage as much as possible in order to start writing,” he tells me via email from Providence, Rhode Island where he is working toward his MFA in playwriting at Brown University. Baisch, who has a knack for making complicated ideas sound like second nature, continues by describing his work like sculpting, “That usually turns into a really maximalist piece of text and from there I have to chip away to make sense of things.”

This visual approach to his written work has its roots in his early education. Growing up in the Bay area, he attended Ruth Asawa San Francisco School of the Arts, where he was initially drawn to playwriting for its esoteric possibilities. “I initially glommed onto the form because [it] provided some allowance for getting weird and gross and poetic, yet still push for narrative.”

And his plays do get gross. In addition to the presence of material mess, bodily excretions (blood, urine, semen, feces) make regular appearances. The initial impression of puerile indulgence is offset by a firm grasp of power structures and the idea that the breakdown of the human body can be seen as an affront to a culture defined by those systems of control, especially for folks who are queer, brown or both, as the majority of Baisch’s characters are.

“If the human body isn’t visibly white and able-bodied and cis-male, it is under attack,” he explains. “The least I can do is obscure what bodies ‘should’ or ‘shouldn’t’ be [or] be doing in my writing.”

Baisch’s latest work, “Refrigerator,” which premieres this month at First Floor Theater, imagines a future where eighty-two percent of the world has uploaded their consciousness to servers controlled by corporations, known as the “IceBox,” dispensing with their material form in the hopes of reaching a kind of digital utopia. Those who are left sift through a world (a “parallel now,” as Baisch describes it) reminiscent of the Los Angeles of “Blade Runner” or the space station in “Solaris,” as if the present were simply the mean of the imagined future and an equally malleable past. Analog technology lives alongside artificial intelligence, although the humans that occupy this world are none the wiser for either. 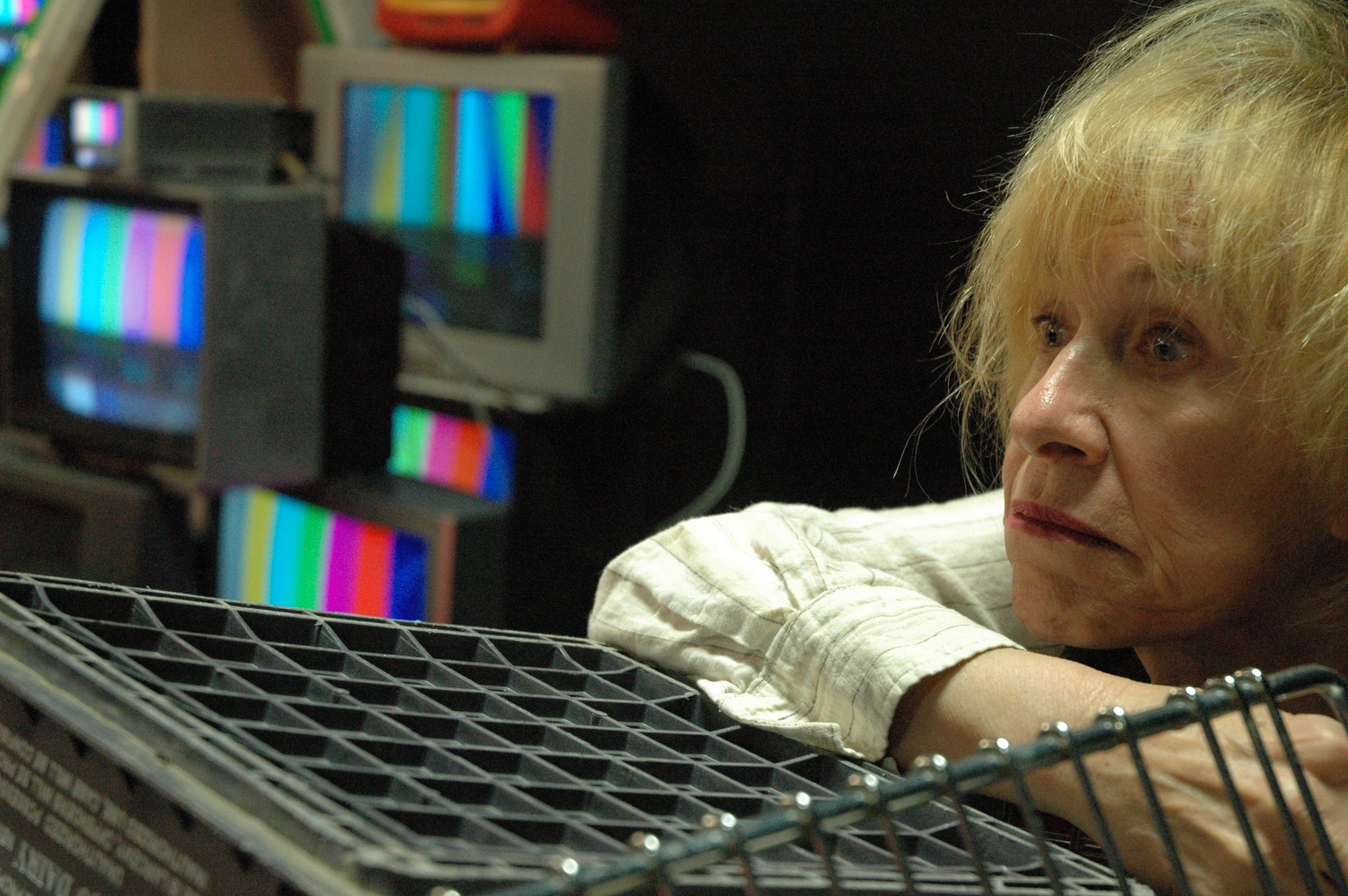 Ellen Colton in “A Measure of Normalcy” at Gloucester Stage

“Refrigerator” looks at the point at which technology, driven by global capitalist superstructures, and humanity, specifically the artistic impulse to create, meet. This is not the first time Baisch has turned his attention and insight to capitalism and its gross excesses. The literal litter of “The Scavengers,” the bank of televisions in “A Measure of Normalcy” (Massachusetts’ Gloucester Stage, 2015), the AstroTurf, tiki torches and pink flamingos that spread like bacteria across the set of “Zipped & Pelted” (The Wulfden at Chicago Fringe 2015), are all byproducts of a consumer culture that values constant availability over, and to the detriment of, sustainability.

“Capitalism is the driving force behind our making economy,” Baisch observes. “I think all artists are responding to capitalist infrastructures whether they realize it or not.”

Baisch’s fascination with consumer culture is balanced by a morbid levity, the essential “laughing instead of crying” approach. His plays seesaw unpredictably from subjects of profound relevance (in “The Scavengers” a character describes in horrifying detail a vortex of garbage in the Pacific Ocean) to observational humor set up by his conceptual environments (“I’m sentient ad space,” a character in “Refrigerator” declares). They remind me of scrolling through a social media feed, playing a ludicrous and endless game of connect-the-dots between self-reflexive memes, videos of police shootings, thinkpieces and ads for teeth-cleaning start-ups.

Baisch finds delight in this cacophony of tastes.

“I love Instagram stories,” he gushes. “I love terrible YouTube videos and awful horror movies and fidget spinners and cliché art institutional rebranding, mostly because I find it all incredibly absurd. I’m definitely of an Internet-age type of gallows humor that allows me to poke fun at some of the most daunting, bureaucratic aspects of society.”

While sliding from amusing to intriguing and from gut-retching to heart-wrenching, Baisch’s plays leave bits of themselves behind, like detritus in the wake of a barge. These accumulate in moments of surprisingly tender revelation. In “Refrigerator,” the willful relinquishing of privacy has resulted in intimacy becoming a commodity, the price of which is corporeal reality itself, causing an unbridgeable rift between two lovers. In “The Scavengers,” a young man known only as “Kid” delivers this monologue to his emotionally unavailable love interest:

I want to fuck you. I want to fuck you until we coagulate into one thing. One fused together mutated monstrosity of a thing that pisses out fucking rainbows. Then we’ll fall apart and die and decompose and maybe we’ll think it was all worth it.

His observations on love and sex are especially poignant given that they come through the perspective of queerness that is constantly under assault by the forces of heteronormativity. “Violence and love are almost the same thing,” Baisch says. “Loving is a violent act and vice versa. I think queers have to confront this much more commonly because it becomes a question of survival.”

When it comes to those who have been othered or marginalized by the white-dominated art world and American culture at large, Baisch is threading a fine, yet fertile, needle. His plays can hardly be read as normalizing, since they are themselves ardently abnormal, and his presence as a queer artist of color in spaces like the Goodman Theatre (where he is the youngest person to have been a part of their Playwrights Unit) or Brown University is itself a political act. (Of New England, Baisch observes, “As the place with the most history in our country, I see that reflected in its populace; people grip tight to their beliefs and find change suspicious.”)

Being in these spaces does not mean they are necessarily accommodating and Baisch’s work reflects the necessity of code-switching for survival. “It’s become part of this vernacular for the marginalized,” he says, “which it totally is. But everyone does it, and often people talk about it in this self-shaming way. I think it should be reclaimed as an adaptive tactic. A measure of cool. A fooling of the patriarchy. A general scam that imbues me with the power.”

Both physically and mentally restless, Baisch admits to feeling like a perennial outsider, an identity he has come to embrace. “I am queer and Latinx and many times I’ve been told I’m not enough of either,” he confesses. “I’m fascinated by people deciding they get to police others’ lived experiences and I guess maybe that’s reflected in my writing. I never feel comfortable as an artist! I’m a masochist. It’s what makes things exciting.”

I couldn’t help wonder, given this sense of displacement and his energetic imagination, if Baisch had an interest in remaking our world.

“Oh, yeah,” he responds playfully, “I’d like to be the one operating the simulator.”