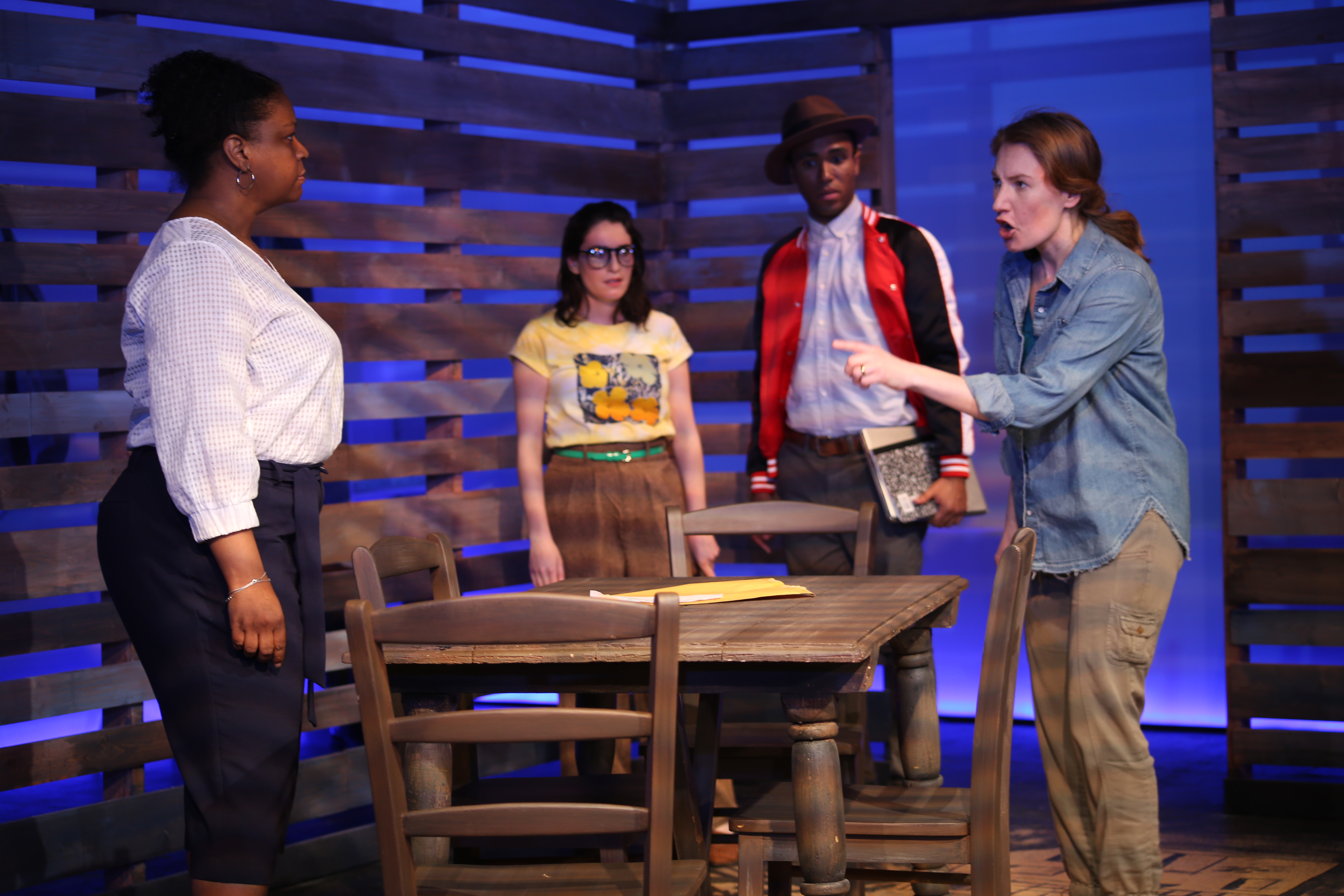 We learn many things—too many things, actually—in “A Home on the Lake,” a co-production of Evanston-based Piven Theatre Workshop and Fleetwood-Jourdain Theatre. Behind every great house lies a great crime, a cogent lesson. Also, real estate agents aren’t really your friend, no matter their race or their line of patter, which seems true enough. And that attachment to a legacy of the past justifies irrational behavior in the present—hold on, come again?

In fact, there are so many messages and plot points flying around that none quite manages to stick. A pity, as the basic issue tackled—how urban ghettoes are created and maintained—is critical in a society still defined by racial segregation. Co-authors Stephen Fedo and Tim Rhoze (who also directs) peel back layers of carefully deposited amnesia surrounding the question of why, to this day, the bulk of Evanston’s minority population resides in the city’s west-central Fifth Ward.

Segregation is a delicate topic in Evanston, a town that wears liberalism on its sleeve. But as we learn here, there was nothing organic about the growth of the Fifth Ward: it is a pure product of racist social engineering and capitalist profiteering. Unlike similar areas in Chicago, the Fifth Ward wasn’t a one-time white neighborhood that experienced racial change. It was a swampy hinterland near the sewage-bearing North Shore Channel, developed after World War I expressly to move African-Americans out of the city center. Despite its origins, the area became a vibrant and appealing neighborhood, studded with black-owned businesses and earning the sobriquet “Heavenston” from the many Southern blacks who chose to settle there in the middle years of the last century.

So why not just tell this interesting and important story straight, rather than constructing an over-elaborate, dual-level dramatic structure about two sets of characters a century apart connected by the bad karma of a crooked real estate deal? And why lard the play with secondary relationships and business double-crosses that thicken the plot without advancing it?

The goal seems to be to engage a younger audience thought of as being unable to wrap their mind around anything that predates Beyoncé. This condescension ends up sabotaging the show, as the twenty-first-century plotline becomes so convoluted that the playwrights themselves appear to lose interest in it, never resolving the story-driving mystery of who really owns the titular home on the lake.

The shadow text here is Lorraine Hansberry’s “A Raisin in the Sun,” about a 1950s-era black family that refuses to sell out its dream in the face of pressure from white neighbors. But whereas “Raisin” depicts the wish to live decently in a neighborhood of one’s choice, “Home” is about the desire to live opulently in a choice neighborhood. The play’s tagline—“Everyone should wake up with a view of the lake”—is equivalent to saying, “Everyone should wake up rich.” Such a wish has little to do with justice or equality (or reality), making it hard to sympathize with Cynthia, the African-American woman who yearns to claim the old lakefront mansion that is the play’s point of conflict, even though she knows she could never hope to pay the taxes on it. The manse is not so much a home as a fetish object, embodying a certain notion of the good life, of making it big. In the process of struggling over it, the underlying acquisitiveness is romanticized, and dignity and compassion are lost in the shuffle.

In short, this “Home” is a confused place. But the play, with its double casting, provides some pleasures. Evanston native Nicholia Q. Aguirre is a force of nature as both Cynthia and Isabella, the great-grandmother she channels and inherits from. Christopher Walsh, as the villain in both of the play’s eras, has a nice John Goodman vibe, his outward bonhomie masking an implacable opportunism. Sean Blake is convincing as the middleman who manipulates his fellow African-Americans on behalf of the white power structure, only to get shafted for his pains. The usually solid Abigail Boucher is overly amped as Cynthia’s worried spouse, loading more energy onto the one-note part than it can comfortably carry. Jelani Pitcher and Rachel Shapiro round out the cast, putting admirable effort into dramatically inert younger-generation roles.

Kristen Martino’s inspired set features a background wall of lath without plaster, revealing the cracks in the social edifice. The whole is skillfully illuminated by Jason Lynch’s coolly-tinted lighting design.

For all its literary imperfections, the show is worth seeing by Evanstonians, who are likely to come away viewing their city differently. Inspired by oral histories of longtime Evanston residents, the play is a valuable repository of local memories and experiences, reminding us that what seems fixed and forever is in fact the result of human decisions made in the past, and that different choices made now can produce a very different future. While not great art, “A Home on the Lake” is good history, sure to spark lively discussions. My advice is to see the play on a day when a post-show talkback is scheduled, and to complete the circle of this communal, place-based project. (Hugh Iglarsh)