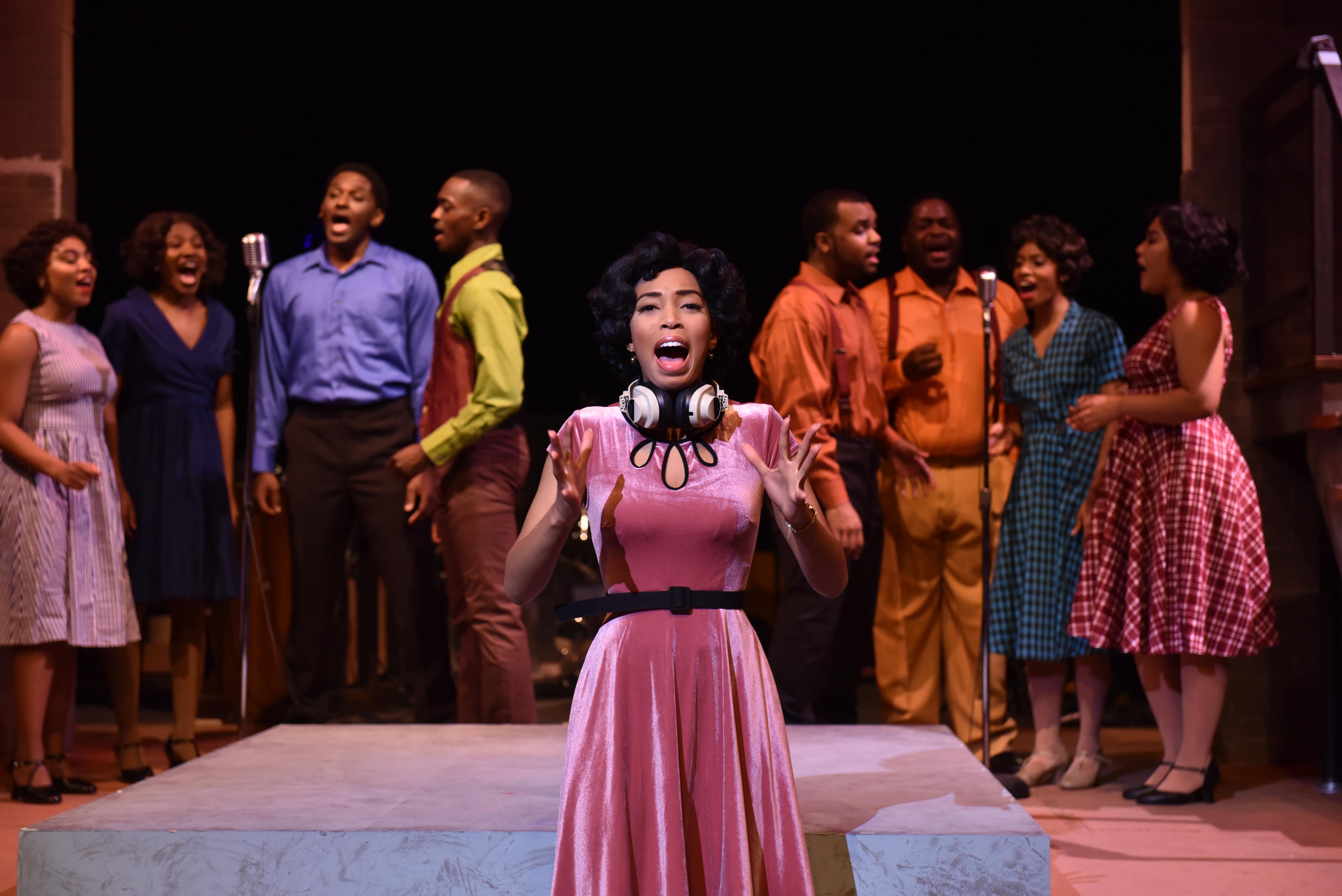 Aeriel Williams with the cast of “Memphis”/Photo: Michael Courier

Huey Calhoun (Liam Quealy) dresses like a color-blind rodeo clown. He doesn’t really talk or sing—he brays and roars with a voice like a billy goat crossed with a donkey. He can’t read and never passed ninth grade. Even his mother never thought he’d make anything of his life. When he’s drawn into a downtown Memphis club owned by Delray Jones (Lorenzo Rush, Jr.) by the lambent singing of Felicia Farrell (Aeriel Williams), he can’t see anything different between pasty white him and the black folks there. It’s 1950s Tennessee, Jim Crow laws are firmly in place and everybody still listens to the radio.

“Memphis,” with book and lyrics by Joe DiPietro and music and lyrics by David Bryan, tells the story of Huey’s forbidden passions for Felicia and R&B music, which he calls “the music of my soul.” Huey’s enthusiasm for both, expressed with an audacity that is part innocence, part sheer obnoxiousness, gets Felicia on the radio—in the center of the dial, no less. His peculiar charisma sparks a mania for so-called “race music” among white Memphis youth and, perhaps, the first steps toward repairing deeply ingrained racial rifts. “Memphis” also portrays complications beyond the idea that art has power to heal social ills. Huey fancies himself the “discoverer” of the music that Delray tells him he has no right to, because he has not lived it. Huey believes he can change the way things work in Memphis—but is it love or is it ego?

Porchlight’s production, directed by Daryl Brooks, is a feast for the eyes and ears. The singing and dancing are fabulous, and the ensemble radiates with life. Williams’ cool beauty is the perfect antidote to the tussling between the outsized men who surround her—Quealy’s rambunctious Huey and Rush’s forceful and intimidating Delray. James Earl Jones II is particularly endearing as the janitor Bobby. He and Gilbert Domally, in the role of Gator, show how a voice can open up a better world in parallel to the sad one we have. (Irene Hsiao)