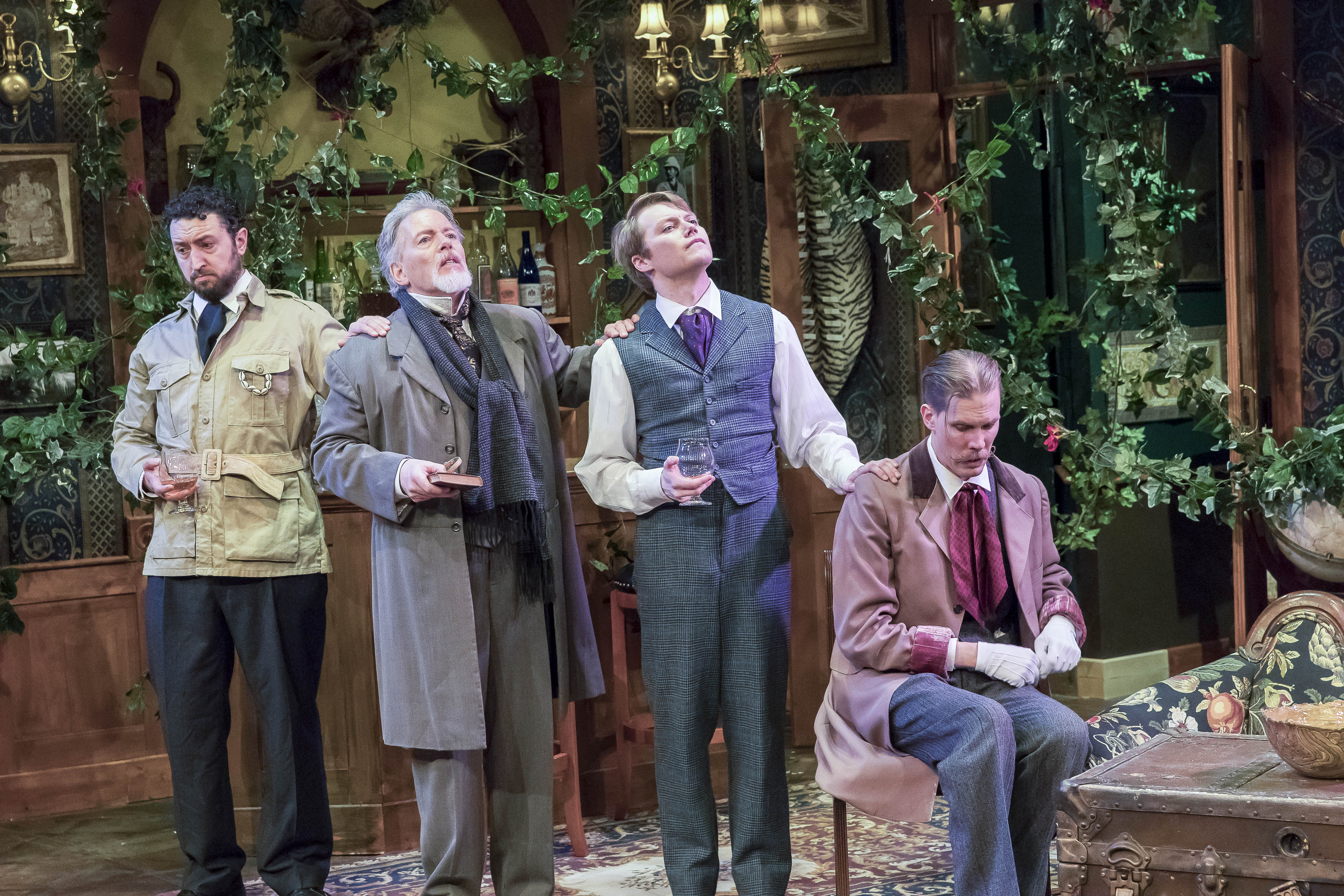 There’s a hint of Marx Brothers-style mayhem in Nell Benjamin’s “The Explorers Club,” from the opening a cappella hymn to science  reminiscent of “Hooray for Captain Spaulding” in “Animal Crackers” to the mostly male hijinks that follow in a fusty, pompously upper-class milieu. In this case, it’s a nineteenth-century London club—an impressive exercise in Victorian clutter, including a zoo of stuffed dead creatures, designed by José Manuel Díaz-Soto—that must decide whether to admit its first female member.

Unfortunately, that early hint never develops into full-throttle anarchy, and this modern farce, which premiered off-Broadway in 2013, itself has a static, taxidermized quality. Silliness abounds, but it’s silliness lacking in real zing. The fun gets tedious fast and the experience, for all its hyperactive plotting, comes off as the theatrical equivalent of empty calories.

The club members are all quirky in exactly the same way. There’s a smarmy botanist (Nate Strain) who raises psychoactive potted plants; a cracked and misogynistic “archeo-theologist” (Bob Sanders); a guinea pig-obsessed zoologist (Eric Pearson) and an equally single-minded herpetologist (Jacob Fjare), who together are testing whether a lover of snakes and a lover of prey can be friends; and a feckless, just-returned explorer (Guy Wicke), announcing his discovery of a heretofore unsuspected East Pole. Into this staidly patriarchal setting, held together by the manly ritual of postprandial brandy and cigars (“what separates us from the animals,” according to one clubman), comes intrepid lady anthropologist Phyllida (Elizabeth Rude). She has discovered a lost city in the jungle, inhabited by blue-tinged, befeathered natives. One of them, Luigi (the engaging and acrobatic Frank Gasparro), accompanies her, bringing a grinning and good-natured chaos to the otherwise dour, tradition-bound club.

“The Explorers Club” is a machine with many moving parts—including the obligatory dramatic entrances and well-timed business involving Luigi as club bartender—and director Robert D. Estrin keeps things chugging at the edge of breakdown. But he cannot overcome the play’s lack of build-up, conflict and suspense, which is accentuated by the ever-mounting complexity. Nor can he mitigate the even deeper problem that the play, while often ridiculous, is not really satirical. Unlike the Marx Brothers, who were always at one remove from their roles, the better to revel in playful, subversive absurdity, the (white) characters in “The Explorers Club” are flat, pat and square. By the final curtain, the play seems less an attack on the elitism and sexism embodied in this boys’ club than a plea to expand its membership just a bit, without changing a thing.

The frat-house humor—a dead Irishman used as a coat rack, a beloved pet devoured, an explorer peeing off a sacred mountaintop and so on—doesn’t mesh with the mostly high-camp approach, producing uneasy laughter. Perhaps the play would work better as a straight-ahead drag show à la Charles Ludlam, with Phyllida —the center of the action and object of rivalrous desire—played by a man. But that wouldn’t cure the work’s vacuousness or alter its attitude of reactionary nostalgia posing as feminist provocation. In the end, when the exiled and more-or-less enslaved Luigi is asked about returning to his native country, he retorts in his own language that his homeland is a “shithole” and he likes it fine here. This final Trumpian moment makes one wonder whether the point of “The Explorers Club” isn’t to make imperialism seem great again. (Hugh Iglarsh)