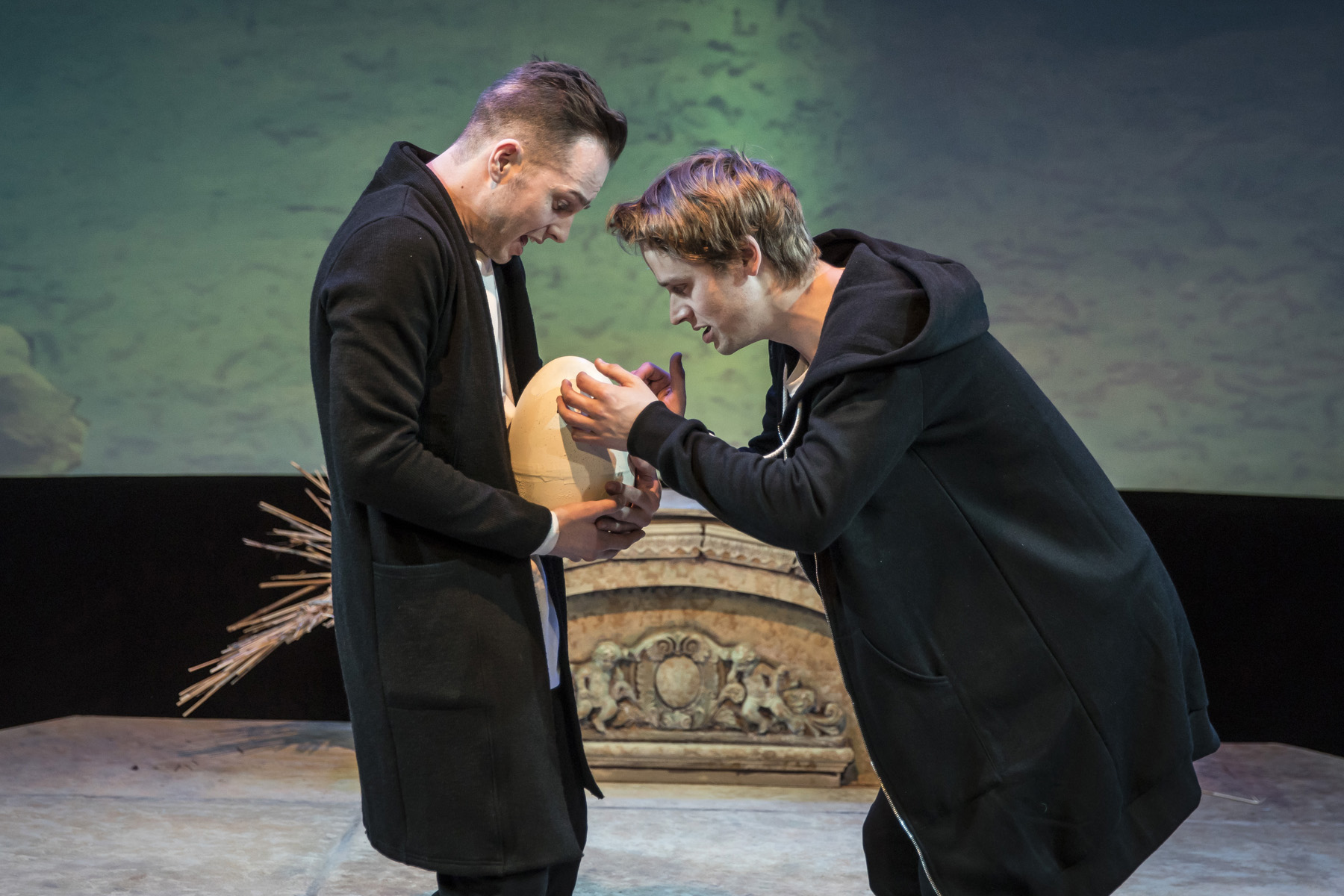 “Birds of a Feather” is a play about penguins. They happen to be gay (or maybe they aren’t gay and just their relationship is gay.) Roy and Silo, in real life, were penguins that lived in the Central Park Zoo in the early aughts. The pair adopted an egg and raised a child, Tango, together before calling it quits after six years. A children’s book based on their story, “And Tango Makes Three,” became one of the top-ten most-banned books in schools and public libraries for five years running. Roy and Silo’s story became a national outlet for debate, commandeered as a ploy in service of agenda or argument, leaving the humanity of the people (penguins) in question out of the conversation entirely.

Paul Michael Thomson (Roy) and Aaron Kirby (Silo) waddle onto the stage with the right amount of gimmick. Behind funny walks and silly costumes (designed by Christina Leinke, striking just the right tone), both Thomson and Kirby give thoughtful, dynamic, and extremely endearing performances. We also meet the people in this world, played by Abu Ansari and Marika Mashburn. As the zookeeper, Mashburn deftly avoids damaging femme stereotypes and delivers her monologues with truth, comedy and a ton of heart. Ansari, as a birdwatcher who describes himself as “a factory reject shirt with too many buttonholes,” has moments of powerful delivery.

The play has a lot to illuminate for us, at times so much that I wasn’t sure what I was meant to pay attention to. There are a couple of clear takeaways. The first: in life-and-death moments, we come back to the fear of dying alone and the value of companionship, regardless of what that companionship looks like (the good and the bad of it). The second: we have the freedom to reject the “way of the penguin”: the “right” way, the “acceptable” way, the path laid out by a culture with a limited understanding of individuality and instead choose the right to love who you love or what you love. Essentially: screw what you’re “supposed” to be and become who you are.

This is a “follow your heart” kind of play. It’s also a real, grounded and well-acted examination of “the pecking order,” radical self-love and self-acceptance, romantic love and the values and challenges of long-term partnership, and performative gender roles. Roy and Silo face our challenges, but they waddle while they do it so somehow these big, scary conversations are more palatable.

“Birds of a Feather” is, surprisingly, not heavy-handed and is quite affecting. We are encouraged to find what “makes our heart grow wings.” It’s a lovely piece of theater. (Erin Shea Brady)