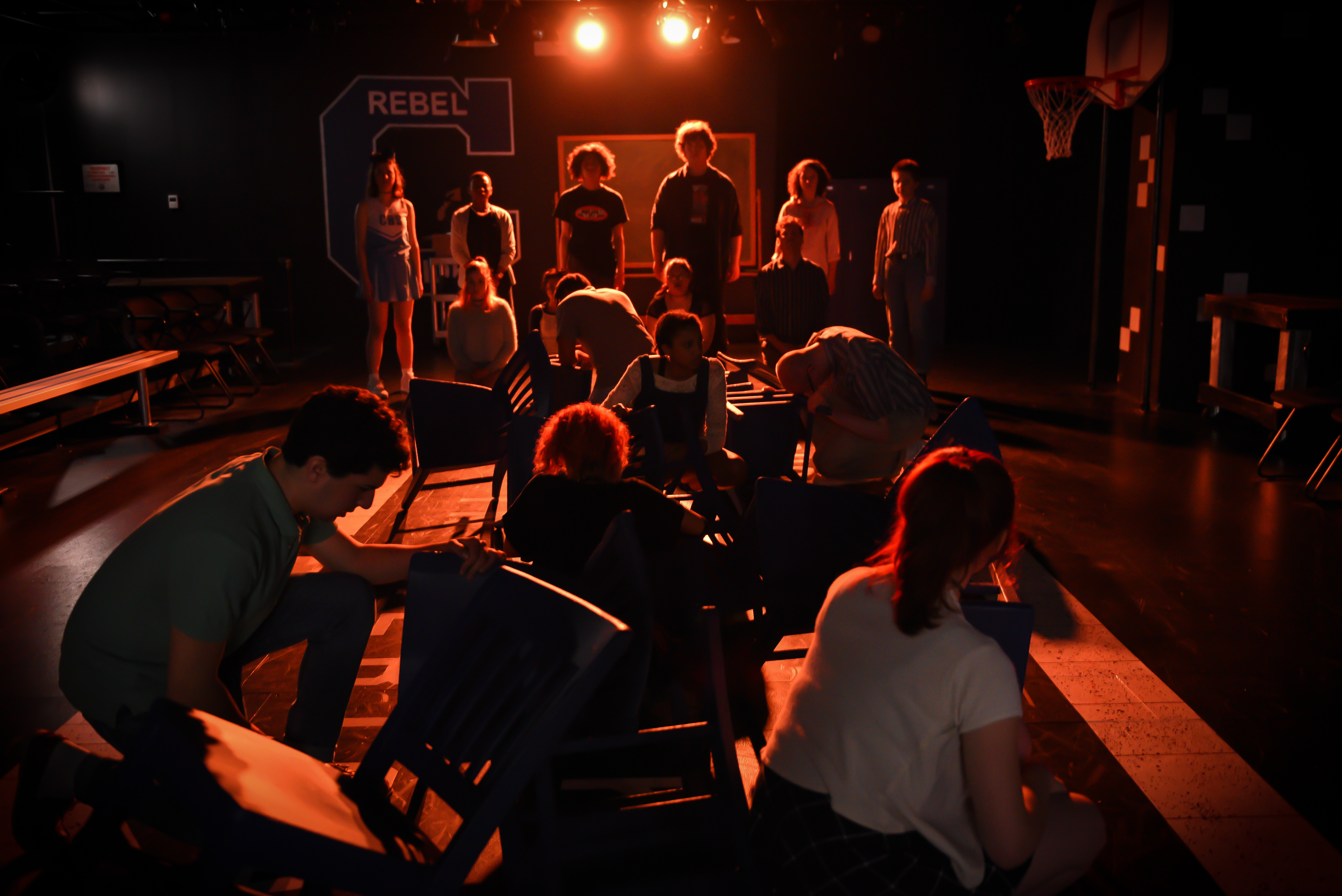 The cast of “columbinus”/Photo: Evan Hanover

It’s been hard to shake the feeling that the narratives of American exceptionalism have quickly and conspicuously unraveled. To be fair, a hard look always took a coat of the glean off these stories. Yet despite the underlying and defining national characteristics of racism, economic exploitation and increasingly illusory democracy, it still felt like some of the basic promises of freedom and liberty still held true. The idea was that the bad stuff was the price we all had to pay. And most of the time that bad stuff was happening to other people anyway. Or so we believed.

No longer, it seems.

Created by the United States Theatre Project and written by Stephen Karam and the late PJ Paparelli, “columbinus” has the feeling of an American origin story. Blending documentary realism with evocative forays into adolescent psychology, the play is haunting, difficult and disturbing. What must have been an extraordinary glimpse into the trauma of teenage years when the play premiered in the early aughts is now, additionally, a bellwether for what came in the wake of Columbine: a culture of mass murder so commonplace that processing its meaning almost invariably leads to troubling questions about the values of the country where this violence occurs.

The central paradox of theater made by young people is that the art frequently has little direct relation to the experiences of the artists performing it. If the work even has age-appropriate roles, the concerns of the young characters are almost always secondary to those of the adults. The Yard, in collaboration with some of our city’s most generous theatrical institutions, has made it their mission to demonstrably address the biases and barriers toward youth-oriented theater. In “columbinus” they have located a work that cries out for their artistic daring and social commitment. With an ensemble of fourteen students and two adults, fearlessly led by The Yard co-artistic director Mechelle Moe (with additional movement direction from Dana Murphy), “columbinus” is The Yard’s most audacious work to date, a statement of some significance given the company’s record of excellence.

A demanding work in its own right, The Yard’s production of “columbinus” pulls no punches from its amalgamation of angsty turn-of-the-century jams (one could write volumes on the connection between Radiohead and the young male intellectual ego) and attentive sound design (both courtesy of Aaron James Stephenson), demanding fight choreography (with violence design by Max Fabian), characteristically versatile props (Dina Klahn), and mood-attune lighting (Brandon Wardell), which shift between efficient overheads and dreamlike hues. One could argue that this production chases too many ideas. Perhaps. And yet, maybe it is my faith in youth-centered art or my natural affection for this particular company, but I see the value in encouraging young artists to overachieve, even at the risk of emphasizing the “over.”

And achieve is what these artists do. Moving fluidly and stirringly as a unit, the young people here lend their roles—a shifting landscape of high-school archetypes—an innate truth. Confronting the difficult subjects of bullying, peer pressure, social ostracizing, and rejection is not an easy task for artists of any age (we as adults still experience these things though not with the same staggering regularity as young people do), but there is something so impressively streamlined about this process for these actors. A less authentically realized production may have felt uncanny, a performance of the performance of adolescence, a la televised melodramas like “The O. C.” and “Riverdale.” Not the case here, as each actor gamely clamors over this demanding work with precision and unflagging energy.

While the first half of the play is largely ensemble-driven, the second half focuses on Dylan (Brian Baren) and Eric (Ervin Tobar), characters who are based on the real-life Columbine shooters. Enough cannot be said for Baren and Tobar’s willingness to dive into the conscious and subconscious motivations of these two young men, pulling out anger, desire, entitlement and fear. They can and should be commended for such radically courageous work. Taken from interviews and recordings, Karam and Paparelli let the killers speak for themselves, their reasoning a jumbled mess of juvenile philosophizing and encumbered rage. The play does not search for excuses for them nor does it present a pat explanation for their actions.

Ironically, what has complicated the narrative of mass shootings is a desire for a singular, institutional blame: gun manufacturers, video games, family, school, pop culture, politics. What “columbinus” identifies instead, largely through these two characters though also through the social hierarchy of high school, is a patchwork source though one that extends largely from the now-open secret of supremacist belief structures and their relation to race, gender, sexual-orientation and religion. The alarming consistency of type when it comes to the identities of mass shooters offers a clarity that some are not willing to face: white men are killing people. In its quest for understanding, “columbinus” suggests, tactfully, that this is a wide-reaching social problem. White men have been told, time and time again, that they deserve everything; when they don’t get what they want, everyone pays for the slight.

The events of this play take place nearly twenty years ago and there is an uncomfortable realization that occurs partway through that, in our fixation on Columbine as the inciting incident of the twenty-first century (perhaps even more so than 9/11), Dylan and Eric got exactly what they wanted: notoriety. To the credit of The Yard, the company has affixed a contemporaneous urgency to this piece of historical theater in both their casting and the insistent, activist bent of the production’s supplementary materials. The Yard is a part of a growing body of Chicago artists that do not separate art from politics. After the shooting at Marjory Stoneman Douglas High School, company members openly participated in rallies and protests at their home base of Nicholas Senn High School.

It’s both impossible to understate and also adequately explain the power of witnessing young people grapple with their realities through art. Not only does it encourage their impulses toward investigation but it allows the artists to see themselves as equals in the art-making process. It is so incredibly vital to create spaces of access and equality for young people, especially at time when their own lives are being devalued by the inaction of adults. We cannot right the wrongs of the past. But we can still assist in making a hospitable future. (Kevin Greene)