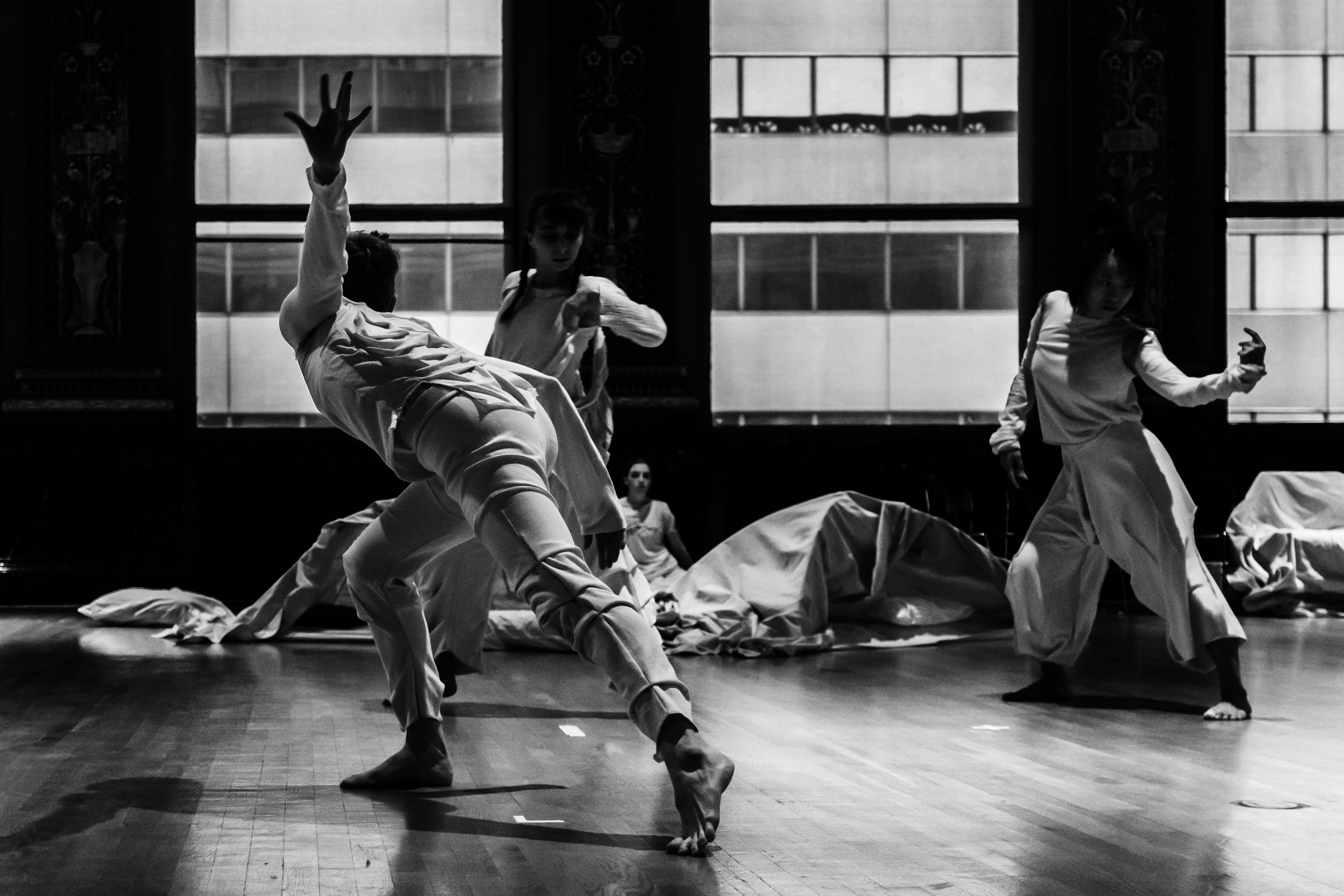 Khecari in “The Retreat” at the Yates/ Photo: Christian DeKnock

The proximity between performer and audience has long been a point of curiosity for Jonathan Meyer and Julia Rae Antonick, the creative partnership known as Khecari. An attendee at a Khecari performance might find themselves in a vacant warehouse, witnessing a solo dance from across a great distance, or seated in one of eight chairs around a small pit containing dancers within arm’s reach. In “The Retreat: One Week,” the boundary between observer and observed dissolves further into a shared experience that could last as little as two hours for the casual drop-in audience member, up to a daily lunch break for the attendee looking to make the performance part of a new, alternate routine, or as much as seven straight days for the committed patron seeking the full possibility of promise in the title. The single performance commences noon on Monday, June 18 and finishes noon the following Sunday, taking sleeping, eating and even inattention to the performers under its umbrella.

Those who have experienced Khecari performances know that Meyer and Antonick, along with their musical collaborators, construct immersive sensory environments of light, movement and sound. In “The Retreat” they seek to establish an indoor “wilderness” that an audience member walks into with the sense that it has existed before they entered and will continue on after they leave—a place where attendees can have any number of experiences, from watching dancers and musicians perform, to participating in movement if they choose, to joining discussion over a meal, to falling in and out of slumber. “I think there’s something about the way one’s mind works when you’re hooked into a modality of entertainment or sensory experience in which you continue to fill your psyche until you have time to detox,” says Antonick. “I’m interested in the idea of beneficial boredom; where they have time to daydream or think—where they’re not being force-fed. There’s giving a sense of time; I’m interested in how we can elicit that kind of entertainment, with a sense of spaciousness. It’s not a hard-and-heavy amusement park-type entertainment.”

And although “The Retreat” is a place for spaciousness and potential boredom, Meyer and Antonick will craft a customized experience for each attendee. The online application to become an audience member includes a short survey that asks not only how much of the performance one wishes to attend, but what types of activities or resources one wishes they had more of in their life (time, quietness, connection, excitement and so on). “A big part of why we want to do this application process is to curate an appropriate experience for each person according to what they’re interested in and what they want,” says Meyer. “It might be that a person is able to take three to four days off from work. If you can arrange that it can be really lovely, but if not, attending for several days would be stressful. If someone says they want more space and time in their life, an overnight might be good for them. Or if they want connection and engagement visiting for a mealtime might be better. We’re initiating personal conversations with people. Instead of just buying a ticket we’re able to really engage with them.”

And what does seven solid days of performance, even performance broken up by periods of conversation or sleep, look like? For Meyer and Antonick, it’s the culmination of a multi-year inquiry into creating dance in what they refer to as “sub-cortical” mind state, which began four years ago in their performance “Orders From the Horse.” The duo’s movement language has always emerged from a subcutaneous, molecular level of physical and energetic awareness, but with “Orders,” they began approaching improvisation from the perspective of relinquishing control. “We had a number of tools we worked with—like repeating things over and over—but most of it was about cultivating a sub-cortical mind state,” Meyer says. “Being aware, more like an infant, of the world: light, shape, but non-identifying way. We developed the improvisation process out of that.” Material from those improvisations became fixed choreography for collaborating dancers, alongside which Meyer and Antonick would then improvise in the sub-cortical mind state, layering and creating more new material. Over the years, Meyer and Antonick have been cultivating their focus and ability to stay in this meditative state. A one-night iteration of “The Retreat” was staged in multiple cities in 2016, a step toward their ultimate plan of a weeklong version. “Having people falling asleep and waking up is part of it—literally a hypnogogic state,” says Meyer. “As far as our experience, we discovered when we were beginning ‘Orders From the Horse’ it was a lot harder to find that mind state if someone came in and talked to you. And what we’re doing now is there are periods of a couple hours where we might be in that state, but how do we come in and out and slip back into that low-brain mode. And cultivating how to move fluidly between the two.”

Meyer and Antonick are joined by dancers Chih-Hsien Lin, Amanda Maraist, John Jandernoa and Enid Smith, as well as frequent musical collaborator Joe St. Charles, all of whom come and go throughout the duration. Audience capacity will be dictated by the number of the performers in the room, each of whom can have up to four “guests,” meaning the audience will range from just eight to sixteen people at any one time; Meyer says, “very intimate.” As with past Khecari shows, the cost of attendance ranges from fully-subsidized to a half-priced ticket to the true cost, which will be revealed at the time of the performance.

“The Retreat: One Week” by Khecari runs noon on June 18 through noon on June 24. The location is revealed through the audience application process.