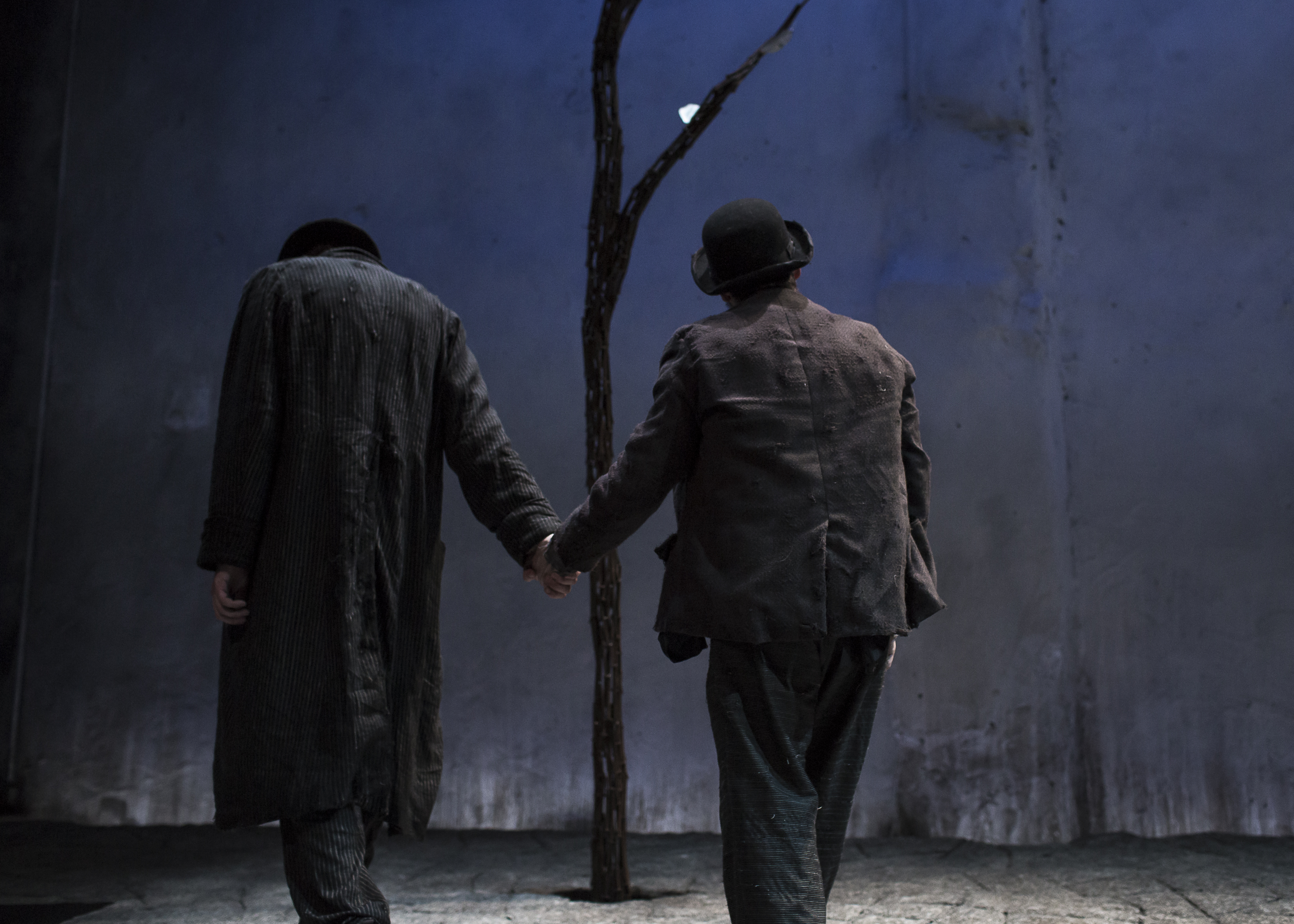 “Waiting for Godot” is a play about nothing: the “Seinfeld” of the stage. It is the pristine bedsheet upon which the anxieties and triumphs of the age in which it is being produced can be projected. Purgatorial in both setting and theme, it is the antithesis of relevant, which makes it satisfyingly novel, though I’m not sure that will stop someone from carving a twisted path from it to Trumpism, that wasteland capital with its garbage gravitational field where all thematic roads seem to eventually lead these days. And why not! There doesn’t seem to be a wrong way to conceive of “Godot.” It is simple though not inane, courageously unafraid of a good fart joke and endlessly remountable. It makes a solid case for the most play-like play ever made.

This is the third production of “Godot” I’ve seen in as many years and the sense I got after the second, which would have been unthinkable to me in the wake of the first, was confirmed by this one: I don’t think I need to see this play again. Ever? Maybe. But at the very least for the foreseeable future, that indefinite period of which this play is unremittingly concerned. Beckett, like Shakespeare, O’Neill, Chekhov, Williams, Ibsen, Miller and a handful of other dead white men, is benignly predictable fare in a town whose theater scene could be characterized as anything but. And while Tympanic and Court’s productions smartly turned the presumed default of whiteness that the theater world is rightly infamous for on its head, this one features a quartet of blokes each more blanched than the last.

The success of a good “Godot” (and this is definitely a good one, as appreciable as a well-laid coat of primer) relies on a few things: solid directorial schtick and the comedic chops of the actors playing the deeply defatigable protagonists. Check and check. Imported direct from Ireland, a country that knows a thing or ten about indeterminate longing, the Druid’s production (directed by Garry Hynes) takes a Marxist—as in the brothers—approach, heavy on repetitious visual gags and existential wordplay that winks like a conniving (and mildly inebriated) Lucille Bluth. It’s a hoot and a ridiculously quotable one at that. “I’ve puked my puke of a life here,” says either the coquettish Didi (Marty Rea) or the hysterical Gogo (Aaron Monaghan) at one point or another. “Same,” I thought, “Hashtag relatable.”

Considering the tremendous benefits with which any production of “Godot” arrives (anytime a marketing department has cause to use the term “masterpiece” a part of me goes screaming into the night), I don’t feel terribly conflicted about treating this play with an absence of deference. Perhaps more so than any other work, “Godot” is capable of being appealing or unappealing depending on a limited number of variables, not the least of which is the fullness of one’s belly. Beckett seems particularly withholding on the subject of meaning in his play (especially since becoming inanimate worm food) and so I won’t speculate on what he wanted from “Godot” (other than for it to never be performed by women). Still, I couldn’t help but wonder how the whole experience might have been shaken from its received rigidity. The first and most satisfying idea that I came up with was also the most obvious and easiest to implement: not doing it at all. What could be more fitting than a moratorium for a play about anticipation and its deferment? “Godot” is cancelled! But in the absence of waiting (or in this case: viewing, itself a form of waiting), what to do instead?

Again, I want to stress that this is a very good production of Samuel Beckett’s “Waiting for Godot.” If you have never seen it before and seventy dollars reads as a fair price for an evening of entertainment to you, by all means get yourself to the theater. If you miss it, you don’t need to worry because unless the entirety of the Chicago theater community starts recklessly heeding my advice, you’ll likely have another chance in a year’s time, give or take. The thing is, this could have instead been a very good production of… take your pick. Our city is replete with eager, talented playwrights chomping at the bit to be championed by an institution like CST, a fact other major theaters have seized on. And if our playwrights aren’t palatable enough than maybe one from New York? I think we’re all mature enough to put aside the Napoleon complex that New Yorkers keep insisting we have. This hypothetical playwright could even be from Los Angeles, if they absolutely must. The only caveats are that they should be alive and have something to say that needs saying.

Point being: doing a celebrated play that is irrelevant by design means not doing a new, contemporary play that could speak—with specificity and imperfection—to some or even just one of the many, many issues and ideas that are gestating in the national and international discourse. If the past sixty-five years has taught us anything, it’s that “Godot” is not going anywhere. So how about we make him wait for us instead? (Kevin Greene)