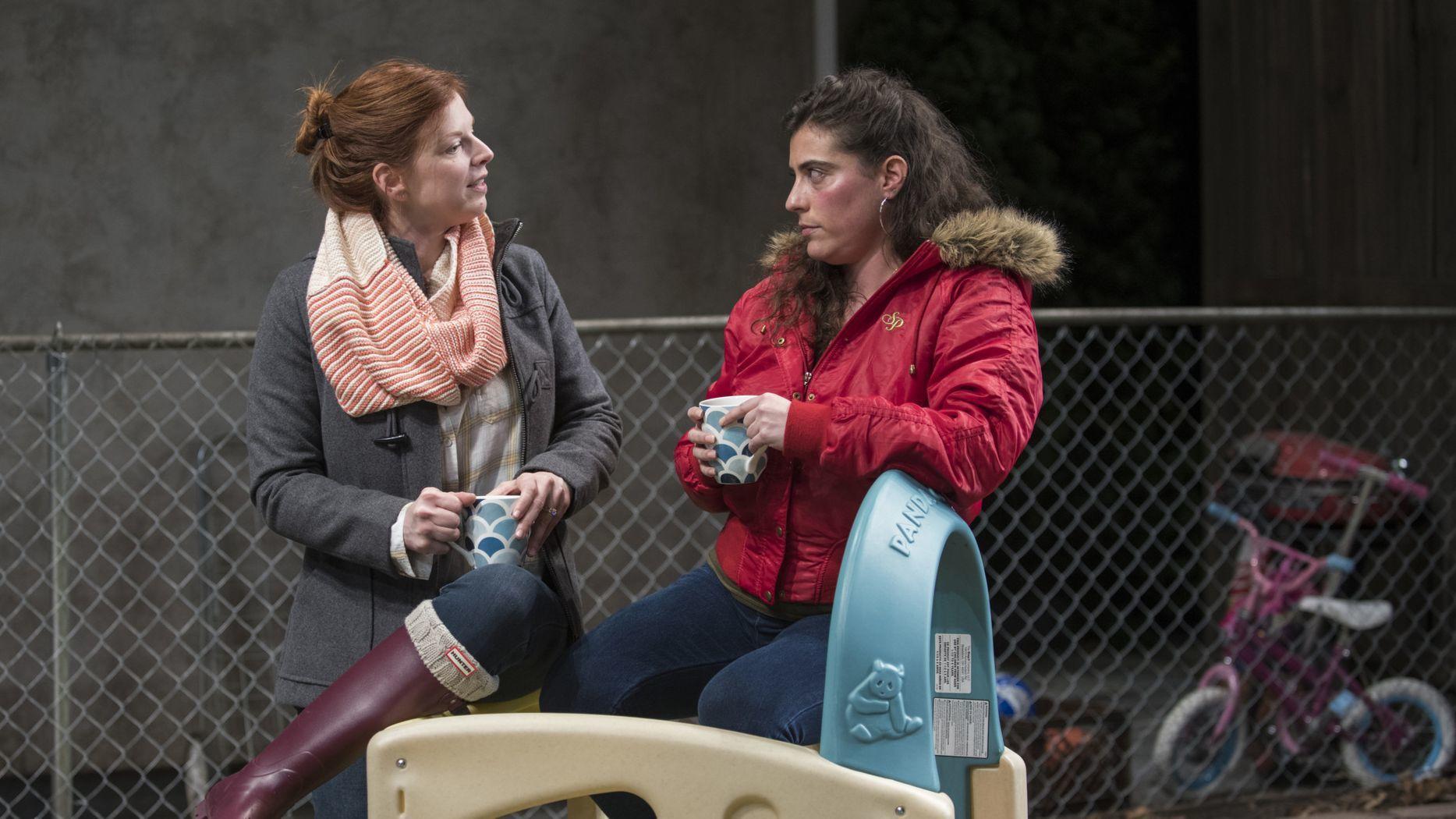 Molly Smith Metzler’s “Cry It Out” is a show about neighbors, and it plays out like a gradually deepening next-door-neighbor-type of relationship. Introducing itself as a talky, overly ingratiating, trivial kitchen-sink drama about new moms adapting to life with baby, the work slowly reveasl itself. By the end, the TV-like fluff has peeled away, exposing heartbreaking dilemmas of motherhood in a culture that sentimentalizes childhood while making unstressed, emotionally fulfilling family life next to impossible.

The story takes place among the boxy duplexes of Long Island, New York, in the cramped backyard—lovingly rendered by set designer Andrew Boyce—of Jessie (Darci Nalepa). There, baby monitor in hand, she communes with her new friend Lina (Laurie Lapidus), sharing coffee, baby stories and eventually much more. The women are not of the same class—Lina has a low-level hospital job and lives with her furtively alcoholic mother-in-law, while Jessie was up for partner at a big-time Manhattan law firm—but they bond like epoxy.

Both are cliché-based types, Jessie the people-pleasing, conflict-averse good girl, Lina her comically brassy and profane foil, à la Marisa Tomei in “My Cousin Vinny.” We never meet their mates, presented here as occasional visitors from another planet, one not dominated by naps, diapers, feedings and constant vigilance.

Under Jessica Fisch’s direction, the opening scenes have a labored, self-absorbed awkwardness, which seems intentional. Bereft of true community in their cool suburban milieu, Jessie and Lina’s frame of reference has shrunk to the dimensions of the nursery. Needing each other’s company, they communicate eagerly but without the ease that comes of long acquaintance. Storm bursts of emotion are followed by embarrassed apology, as each woman reaches out and then pulls back, never reaching equilibrium.

It’s when Adrienne, another new mother, joins the kaffeeklatsch that the drama begins and the self-consciousness fades. Openly angry and blatantly rude, Adrienne has been pushed into joining the apparently happy pair by her dense, earnest husband Mitch (Gabriel Ruiz), who cannot understand why his successful, driven, workaholic wife has not, after giving birth, immediately turned into June Cleaver. The character of Adrienne—played with diamond hardness by Kristina Valada-Viars—is a disturbance, an enigma, who can’t be assimilated into this white picket fence world. Her radioactive hostility prefigures the tonal shift to come, when Lina and especially Jessie come to realize how limited their options are as mothers who simply wish to be with their babies.

The play’s title refers to a bedtime strategy in which infants are allowed to cry themselves to sleep with no comfort offered. Lina doesn’t buy the theory; asked why, she blurts out, “I don’t hate babies.” What this play asks, implicitly, is whether we as a society feel the same way and, if so, why we do so little to support new parents during the first year, when the parent-child bond is formed.

There’s a long and eloquent pause at the beginning of the third act of this intermissionless show when Jessie ponders the true soul-cost of the American Dream she’s been sold, that of high-consumption domestic bliss in a private setting. For me, that pause—and the resigned, beyond-tears sadness of the denouement that follows—redeems this play, shifting it from a mundane slice of life to a sharp and poignant questioning and critique. (Hugh Iglarsh)