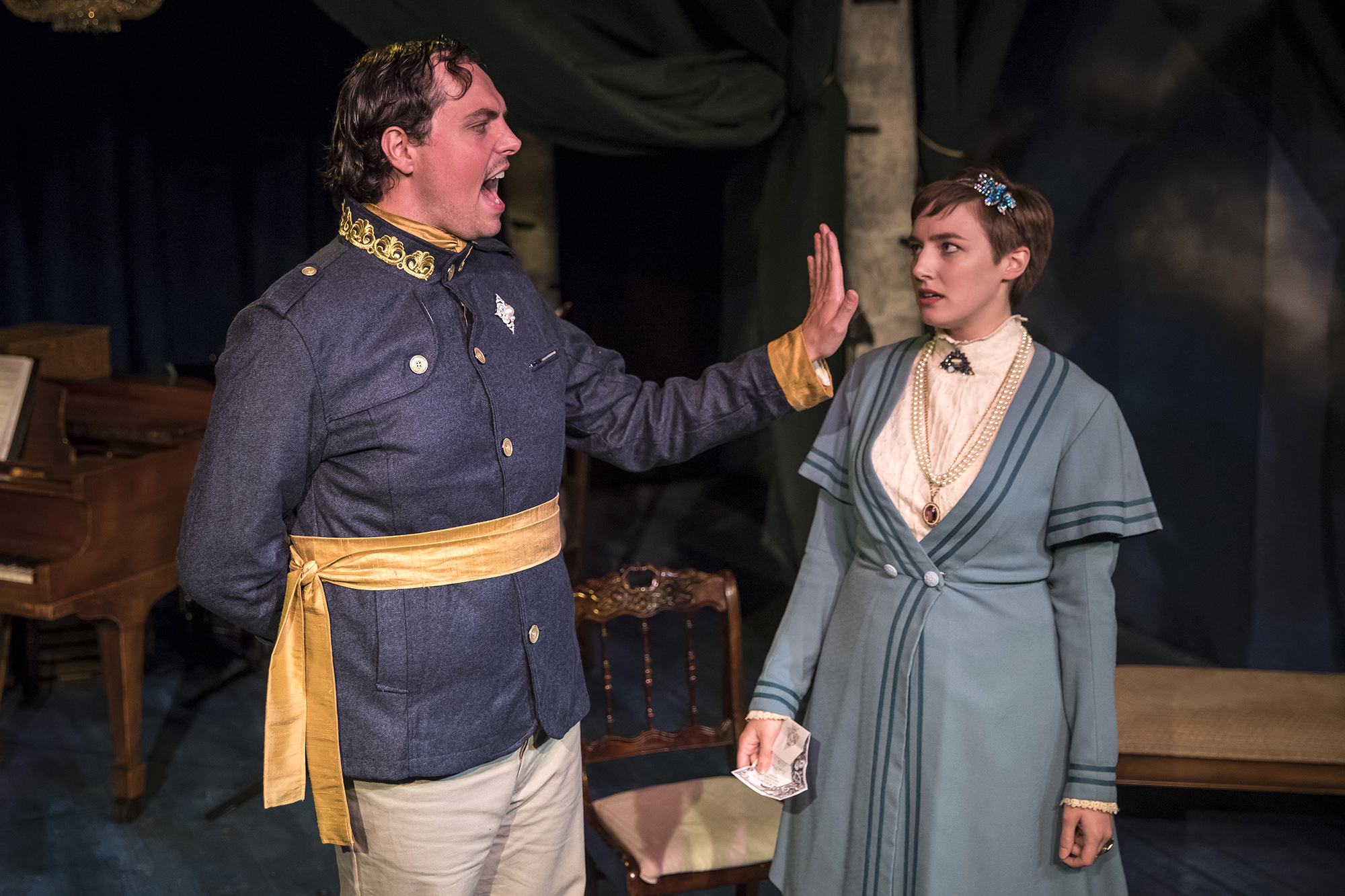 BoHo Theatre’s goal, according to their publicity material, is to explore “the bohemian pillars of truth, beauty, freedom and love.” So why, one wonders, would they pick Stephen Sondheim’s “A Little Night Music,” which is about as bohemian and countercultural as a debutante launch at the Drake?

The 1973 Tony-winning musical is based on Ingmar Bergman’s 1955 film, “Smiles of a Summer Night,” a rare comedy by the Swedish master, which pits passion versus respectability in a turn-of-the-twentieth-century aristocratic milieu. But where Bergman’s touch is light, Sondheim’s is poundingly heavy, creating a world less midsummer night’s dream than neurotic nightmare of privileged self-involvement.

The plot is a shifting tangle of relationships among a half-dozen major characters, with fading but still charismatic actress Desiree (Kelli Harrington), as her name implies, serving as the central object of desire. Desiree is of the demimonde—she has a natural daughter (Isabelle Roberts) who is kept stashed away at the country place of her formidable grandmother—and her natural habitat is the estates and townhouses of her wealthy sugar daddies. Desiree is the once and perhaps future lover of bland lawyer Fredrik (Peter Robel) and current mistress of the conceited, chauvinistic Count Carl-Magnus (Christopher Davis), an “officer of the dragoons.” Middle-aged Fredrik is wedded to (but to his chagrin, not sleeping with) the ditzy Anne (Rachel Guth), who, at eighteen, is younger than her stepson, the achingly earnest seminary student Henrik (Jordan Dell Harris). And Carl-Magnus is married to the long-suffering Charlotte (Stephanie Stockstill), whose continuing attachment to the Harvey Weinstein-like count smacks of purest masochism.

And that’s just the setup. In the second act, the plot thickens further over the course of an endless Scandinavian summer twilight, as romantic schemes and pairings form and dissolve, until true—or at least age-appropriate—love holds sway. As the final curtain nears, the musical delivers one of Broadway’s classic eleven o’clock show-stoppers, “Send in the Clowns” (“Isn’t it rich? Aren’t we a pair?”), a song that is at the same time hauntingly pretty and appallingly sentimental.

No fewer than fourteen cast members occupy the small Greenhouse space, with the four-piece orchestra, including piano, permanently clogging the middle of director Linda Fortunato’s staging. The effect is like the Kennedy Expressway at rush hour, as singers wade through the chorus to hit their marks, then belt out their songs directly to the seats, with little sense of theatrical space around them. And the numbers themselves, for all their polished rhymes and contrapuntal structure, are monotonously precious and brittle. The whole thing comes off as old-fashioned, contrived and not a little amateurish, what with the many awkward, overdone line readings and the clashing performance styles, which range from Viennese operetta to American soap opera.

Sondheim has his legions of true believers, who gravitate to the composer’s undoubted technical skill and aura of sophistication. These fans will relish the chance to hear “Send in the Clowns” in its original context, as well as the other seventies-era show tunes in this only occasionally revived musical. For Sondheim agnostics, though, the pleasures on display here are sparse: Marguerite Mariama as Desiree’s retired courtesan mother radiating world-weary wisdom and Belle Epoque elegance; the powerful voice of Ross Matsuda, inexplicably relegated to the chorus; and a moment of dramatic tension and release near the end when the studiously artificial party disintegrates, allowing everyone at last to breathe. But there are more disturbing moments than compelling ones, such as Fredrik’s ode to marital rape, “Now” (with such lyrics as, “There are two possibilities: A., I could ravish her, B., I could nap”) and Charlotte’s unabashed delight when her brutish husband challenges Fredrik to a duel over her honor, as though only male rivalry validates a woman’s existence.

There’s nothing bohemian—or healthy—about that idea. It points to something jarring and ugly beneath the show’s slick, polyphonic surface. (Hugh Iglarsh)