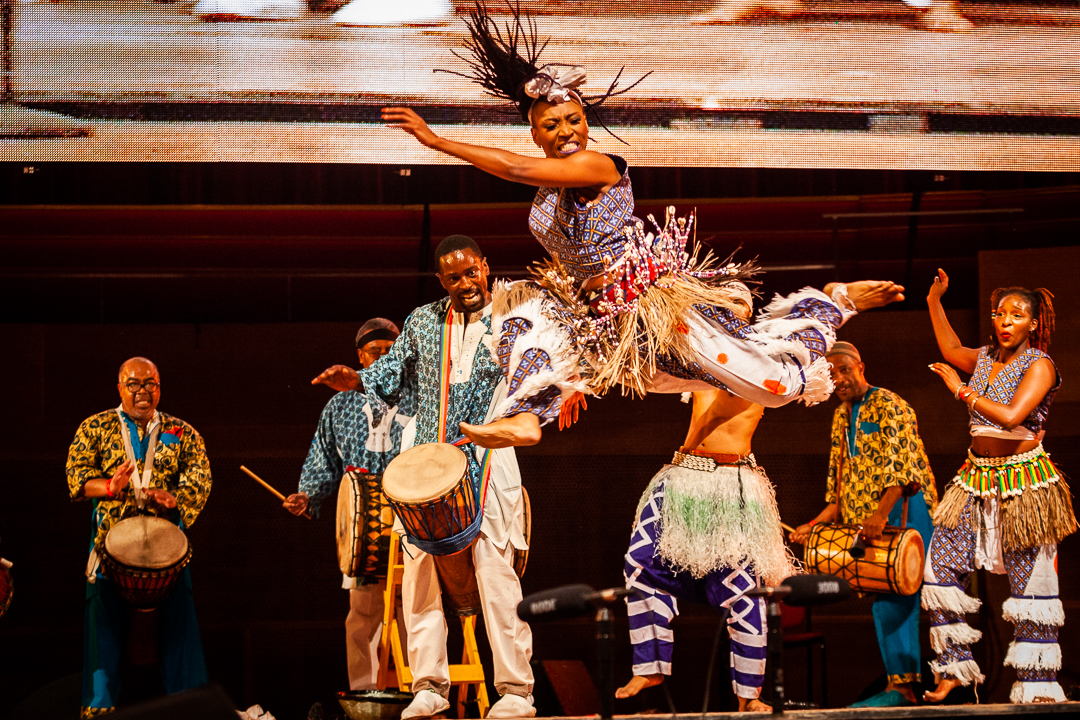 Dance concerts tend to be pretty buttoned-down affairs: darkened theaters, hands folded in laps save designated times for applause, phones silenced and tucked away in bags. Not so at the raucously fun—if somewhat chilly—closing-night performance of Chicago Human Rhythm Project’s “STOMPING GROUNDS” festival at the Pritzker Pavilion. The four teenage girls seated in front of me were model audience members, clapping along, laughing and bouncing in their seats, snapping photos of the stage and each other, and all around adding to the playful, celebratory atmosphere of the event.

For the fifth year in a row, CHRP has organized a series of free dance performances by at least a half-dozen dance companies from different folk traditions, each hosting another at their home base and traveling to different neighborhoods to expose audiences to a style of dance they might not have seen before. Performances and workshops take place in cultural centers, museums and public schools, building bridges between many of the traditions represented in pockets of our city; participating companies this year included Ensemble Español Spanish Dance Theater, Trinity Irish Dance Company, Mexican Folk Dance Company of Chicago, Natya Dance Theatre, Chicago Dance Crash, Muntu Dance Theatre of Chicago and CHRP’s resident American tap company, Stone Soup Rhythms. The festival culminates in a grand-finale performance in Millennium Park in which all seven companies tag-team the stage in a foot-pounding celebration of both diversity and the intersection of dance and music traditions we have in common.

As the sun set Thursday night, temperatures took a precipitous drop in Millennium Park, yet sweat could be seen pouring from the brows of the dancers on the jumbo screen behind the Pritzker stage as feet pounded out complex, syncopated and rapid-fire rhythms on a massive, well-amplified, raised wooden dance floor. One surprise highlight of the evening was when CHRP founder and executive director Lane Alexander introduced diplomats from Ireland, Mexico and Spain to the stage, then invited the Consulate General of Ireland to demonstrate some pretty darn impressive step-dancing chops. The crowd went wild.

The high point of the show was unquestionably the final performance, when Muntu Dance Theatre—a company impossible to follow by virtue of their high-octane stage presence and infectious, ecstatic joyfulness—concluded their number by bringing back to the stage the six other companies for what amounted to an onstage party, with badass dancers from seven different traditions taking turns in the middle of a dance circle, facing off and bringing their hottest moves—headspins, high-speed taps, flying feet—to the beat of the Muntu drummers. By the end of the show every audience member was clapping, hollering and generally following the excellent audience behavior standard set by the four young women in front of me. After an enthusiastic standing ovation, we audience members made our way out of the pavilion, rubbing our cold hands together, but smiling broadly, feeling we had all been invited to the party. (Sharon Hoyer)