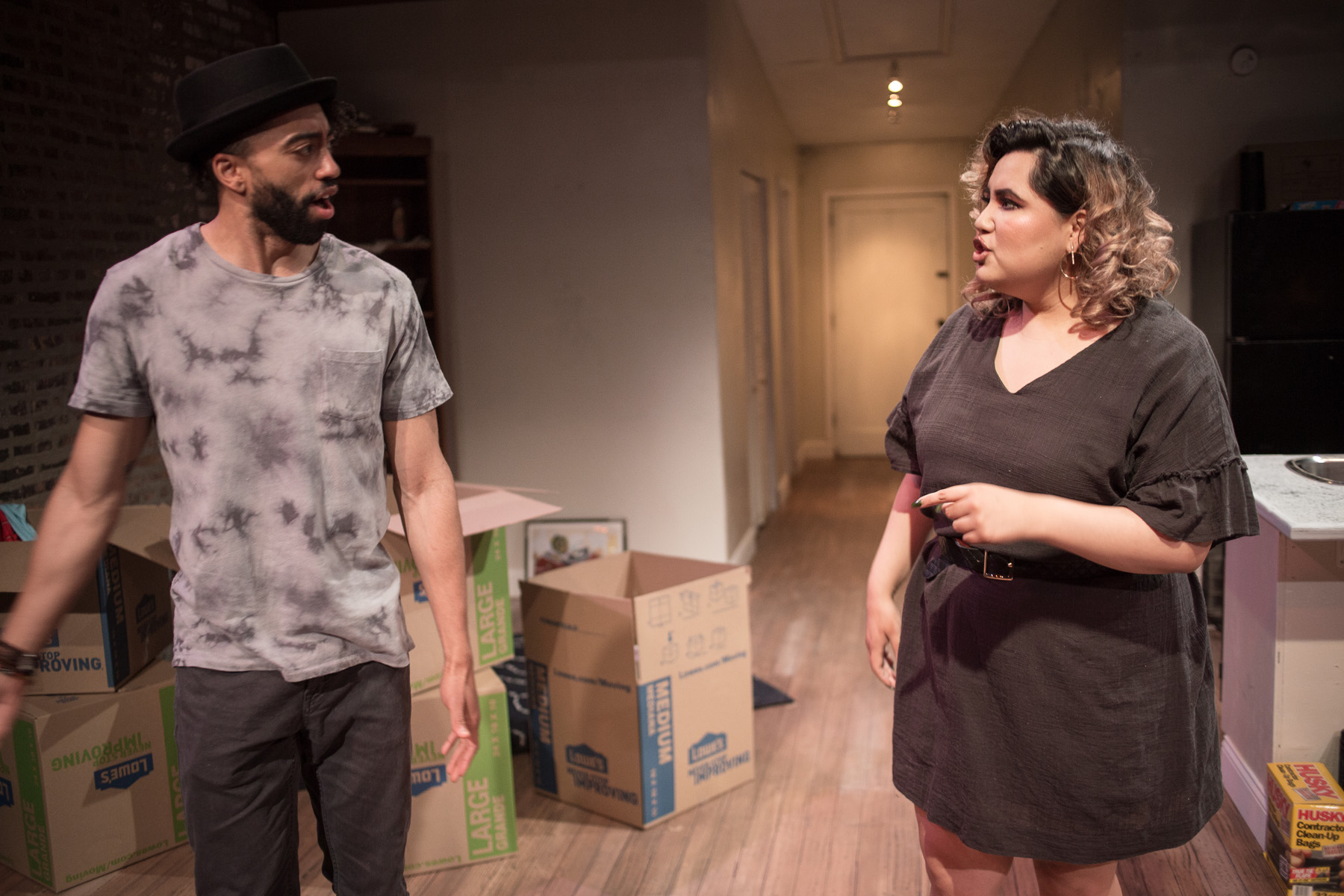 When the neighbors start a prayer session downstairs, Marisa (Karen Rodriguez) grabs a baseball bat and pounds the floor to make them quiet down. But new Pilsen residents Marisa and her boyfriend Lev (Rashaad Hall) soon reveal themselves as the loudest neighbors in the complex. Between their bickering, an out-of-control Alexa, several bouts of coitus interruptus, and a lot of operatic screeching as it dawns on them that their apartment is haunted, Haven Theatre’s production of Isaac Gomez’s “The Displaced,” directed by Jo Cattell, is one raucous play. It also seems, at first, to have the premise of privileging a cute story about gentrifiers moving into a shabby apartment over the history of those who have been displaced.

Mari and Lev aren’t stereotypical faces of gentrification—Mexican-American Mari is an unemployed actress, and African-American Lev is a painter with a day job as a restaurant host. If it weren’t for Mari’s daddy’s money, which covers the rent, they might just be working-class newcomers to a neighborhood already known for a vibrant arts community. But just as family money is often the unspoken secret of working artists, Mari and Lev prove more insidious interlopers than their extremely millennial attempts at interracial relationship harmony—which include mutual affirmations, references to Audre Lorde and Benito Juárez, and passive-aggressive games of Truth or Dare?—would suggest. Within social conditions where “I see you” means as much if not more as “I love you,” Mari and Lev play hide-and-seek with each other and the community around them: Mari wants to live near people who look like her but she doesn’t want to actually interact with them on the train, in the street or at home. Lev counters his economic and relationship anxieties with colonialist impulses to paint a Lady of Guadalupe mural in their kitchen and trade dick pics with a male lover.

The displaced make themselves known indirectly—at first with flickering lights, weird smells and pictures that won’t stay on the walls, then more aggressively with a form of possession that mixes kitschy horror flick effects with ritually slaughtered chickens—as Gomez presents a world in which the displaced, though unseen, can still be felt.