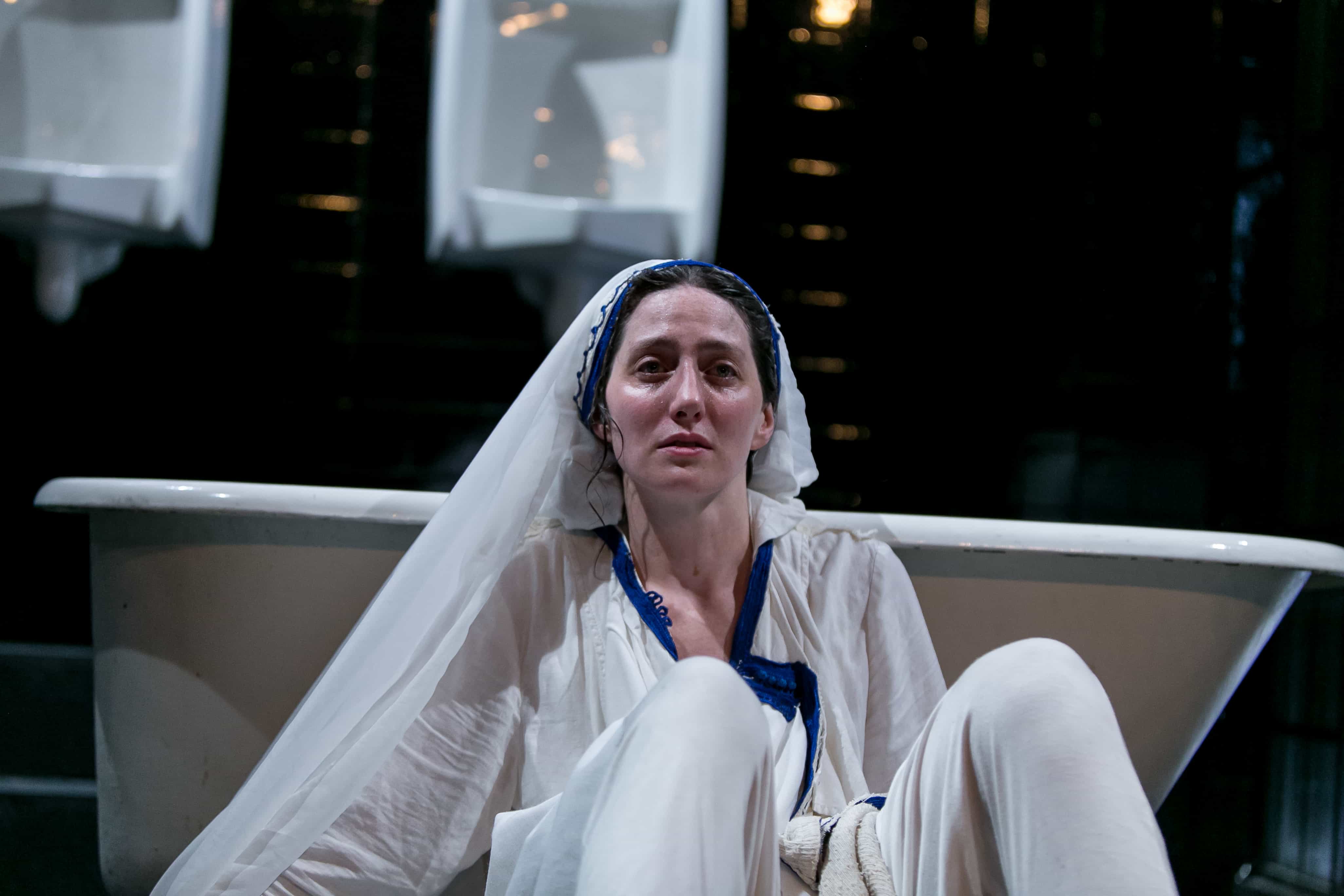 Four stories that take place in a bathroom. Black glimmering tiling clings to the walls. Urinals. A shower and a sink, a toilet and the bath in the center of the room. It’s a disorienting mix of private and public, like the stories that follow. A dancer’s feet go missing in the street. A painter coats her canvas with vengeance and indictments of rape. A saint struggles with faith. A sex worker drinks from the sink and tries to sleep in a flat that’s no longer hers.

These “Stories of the Body” are written by András Visky with direction by Visky’s son, Andrej, and Melissa Lorraine. They are mostly beautiful, frightening and poetic. Each one, named for the woman at its center, is self-contained and in dialogue with the others, sharing staging and images or providing thematic counters.

Eva (Melissa Lorraine) lives in a world that tries to beat the happiness out of her. Her constant childlike joy and self-deprecating jokes remind us that to cope is not always about avoidance but sometimes about redirection. Lorraine’s depiction of the sex worker is spontaneous, never getting caught in the trap of internality or distant memory. Lorraine always shares with us even when Eva wants to hide the pain. What does it mean to be good in a world that does not care? When the sea billows against the bathtub and Eva shouts that she’s won, the victory is bittersweet and hurts desperately.

Artemisia Gentileschi (Katie Sherman) is a Renaissance painter extraordinaire and victim of her art tutor. Art becomes the bane of her existence and her only means of catharsis, a feeling she compares to vomiting. Artemisia’s story, despite having the most obvious parallels to contemporary political issues, is exhibition-heavy, with nuggets of deep wisdom and beauty that are mired in a swamp of plot and factoids. Sherman seems to be holding herself back, only releasing during the last few moments.

Lina (Laurie Roberts) has lost her feet in an accident and can’t seem to find them. Her story is a feverish bubblegum haze, filled with non-sequiturs, nightclub animal masks, and huge puppets. Roberts’ work is lovely, but she is an able-bodied woman performing as a person with a disability.

Theresa (Katie Stimpson) is both a zealot and atheist, a saint and pride incarnate. Her delusions of God and self-made comparisons to Antigone raise her up just as they tear her down. Stimpson’s performance is manic, shattering and terrifying. Her manipulation of the bodies that fall prostrate at her feet warp your sense of her righteousness and the way she sees herself begins to fall to pieces even while she claims to do God’s work. This piece is a must-see. It left me broken.

While “Stories of the Body” is four (mostly) good pieces of work, there are some qualifiers. The work is not “entertaining” and it demands careful listening. Depending on the order of components, you may have to schedule it over several nights: each story is about an hour long. And depending on the order of them, you may or may not feel exhausted after just one.

Being a mostly beautiful show, the miscasting of Lina tarnishes the potential fullness here and undermines the sense of dignity and perseverance that these narratives acknowledge for those perceived only as victims or heroes. (Jay Van Ort)