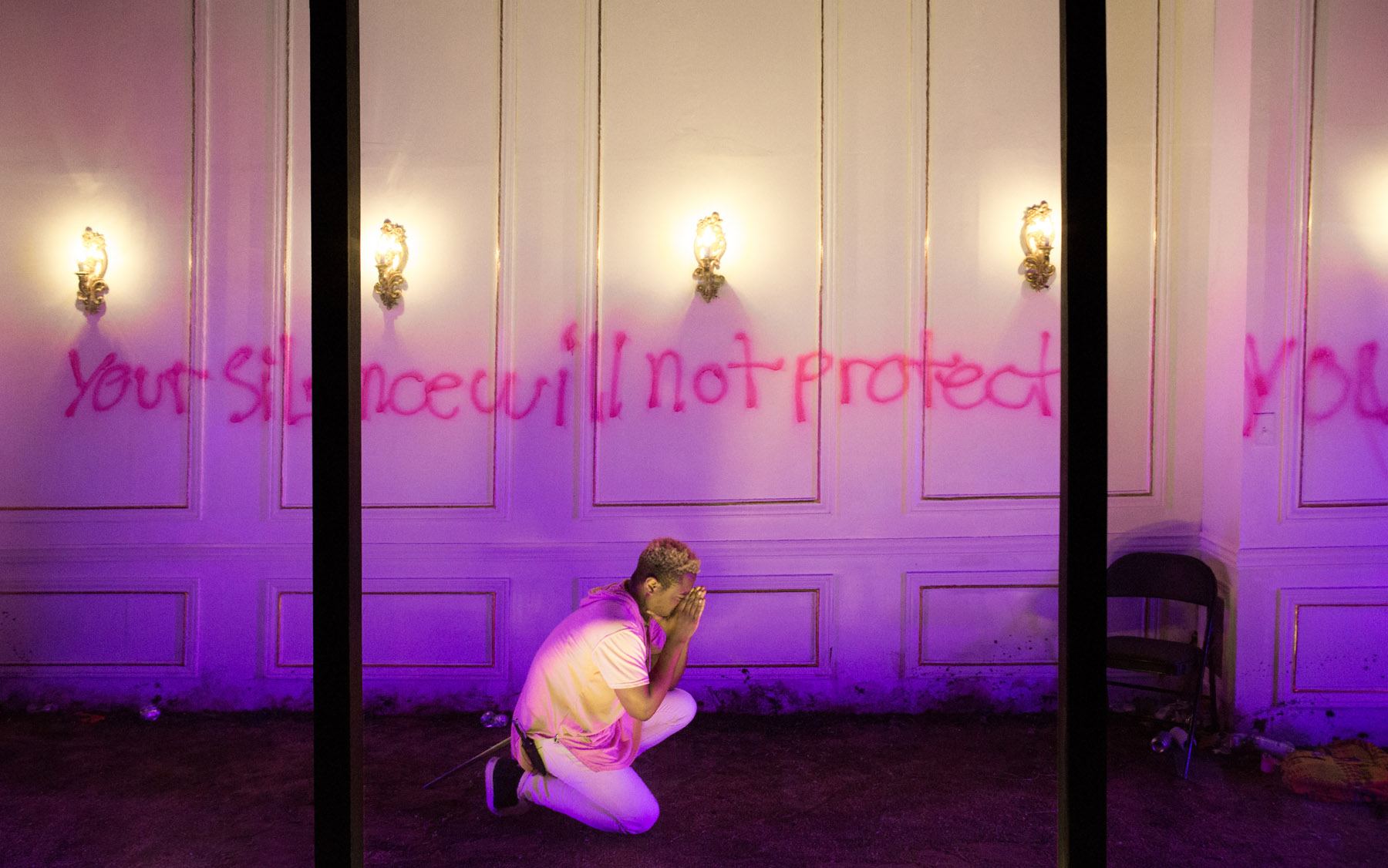 Monty Cole’s stunning production of Shakespeare’s “Hamlet,” now at The Gift Theatre, is an exercise in what it means to reinvent a classic. It’s a deeply personal, unapologetically black, and unapologetically irreverent production that takes the dusty tome of the four-hundred-year-old play and balances it squarely on the knife-like edge of what “Hamlet” has been and what “Hamlet” can be if it is approached with courage, understanding and heart.

Captured inside a fishbowl-like set designed by William Boles that manages to seem beautiful and artistically dangerous all at once, Cole’s “Hamlet” is not about madness or mystery as so many productions of this iconic and overdone script try to be. The question of Cole’s “Hamlet” is not whether Hamlet is mad or not. Instead it asks, “What does it take to survive unthinkable grief?”

This thesis is beautifully made clear when, in Claudius’ (John Kelly Connolly) speech in act one, scene two (“‘Tis sweet and commendable…”), Hamlet (Daniel Kyri) stares at the usurping treacherous white man—who has taken his father’s throne and is trying to convince him that grief isn’t manly—with an expression that very clearly shows he’ll have none of Claudius’ toxic masculinity nonsense. In this production, young Hamlet understands the value of allowing yourself to grieve.


Kyri’s performance is nuanced and gorgeous, made more poignant by his relative youth. No thirtysomething actor can capture the fear and uncertainty that Kyri can just by existing in the unsure space of being in your twenties. And to anyone who feels that “To be or not to be…” is the most important speech in the script, I dare you to watch Kyri’s “Oh what a rogue and peasant slave am I…” and not feel grabbed by the lapels or gripped by the heart.

Kyri is supported by a cast of equally phenomenal performers—to the great credit of Cole and casting director Emjoy Gavino—in particular Gregory Fenner’s Laertes and Netta Walker’s Ophelia, whose performances illuminate the shining warmth of adult sibling relationships. And Martel Manning who, both as Guildenstern and Gravedigger, is utterly captivating and consistently hilarious.

A jarring and extraordinary partnership between sound design (Jeffrey Levin) and light design (Michelle E. Benda) acts as the perfect tool to keep the audience from getting too comfortable in a text that’s so familiar to many. And it would be a great injustice to neglect commending Gaby Labtoka’s fight direction, which is all sharp and brilliant. The duel in particular is a triumph; it could not have been easy to choreograph a rapier fight in that tiny space.

In a recent review of another well-loved classic, my editor all but called for a moratorium on “classic” plays written by dead white men. I couldn’t agree with him more but with this caveat: if you’re going to do Shakespeare, do it like this. Make it feel new, treat it with less reverence, approach it from a personal space. Try to embody the courage of Monty Cole. (Emma Couling)