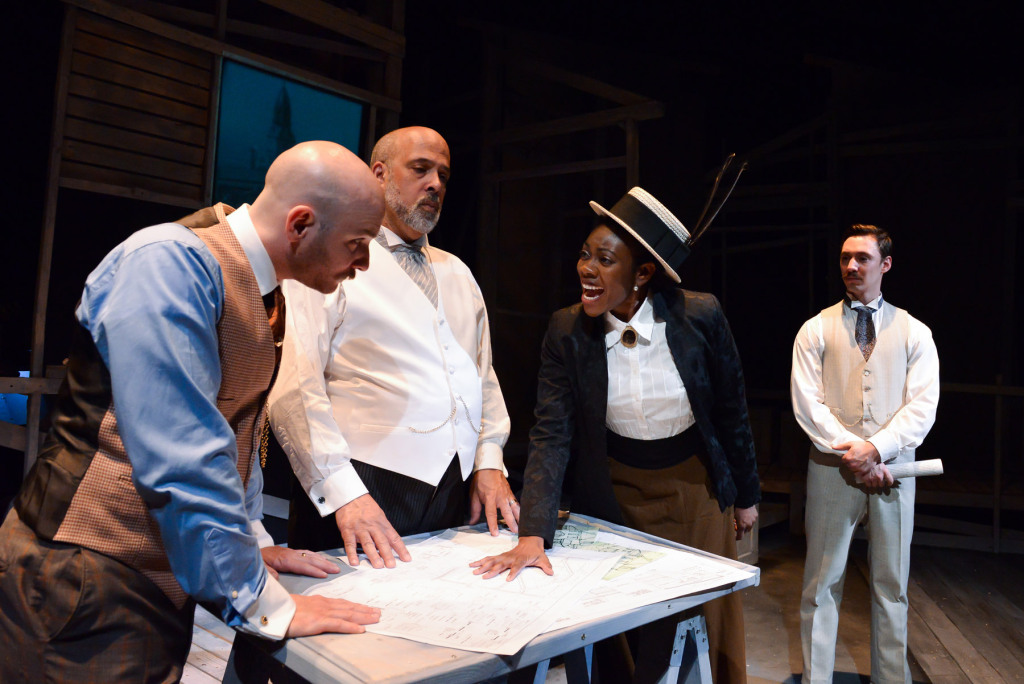 June Finfer (book and lyrics) and Elizabeth Doyle (music and lyrics) tell the story of architect Daniel H. Burnham (Pavi Proczko) and his tireless work in managing the construction of the 1933 Chicago World’s Fair with this world-premiere musical celebrating the Chicago that continues to pull itself up from the fetid straw of its historical stockyards, with the banner “Second City” clutched tightly in its jaws.

Finfer and Doyle play with themes of race, ethnicity, gender and class as backdrop to the biographical exploration of Burnham, here categorized as a less-talented artist who finds his place in a world order through passion for the city and his work, the tenacity of a bulldog and his deep-abiding friendship with architect John Root (Sam Massey). Burnham battles the country’s architectural aristocracy, labor unions, political factions, and the city’s mercurial weather to see the project through to its profound purpose. Despite a marriage near-splintered by his need to travel for his work, and the deaths of partner Root and protégé Michael O’Malley (Chase Wheaton-Werle), Burnham (and Chicago) emerges the victor.

This musical tone poem draws from stylistic elements of the period, intermingled with occasional twentieth-century atonality to create a consistent evocation. Director Erik Wagner keeps the players in the same theatrical world. Choreographer Jessica Texidor’s music hall movement is right, if there is too much of it. From the clean diction of the singers to the precise support of the three-player pit band, musical director Paul W. Thompson’s experienced hand is always in evidence.

I wonder if the present incarnation would not better serve as a backdrop for a more gripping story with its own musical palette. This wide swath struggles for focus. I also wonder if the creators haven’t ended up with a different story than they think they’ve written, that being the kinds of love between men that existed, unquestioned, before World War II. Burnham’s strong bond with Root and his attraction to and affection for O’Malley provide an interesting counterpoint to his marital struggles. The artists here are playing the text and may have uncovered a gem hidden in the shadows. (Aaron Hunt)