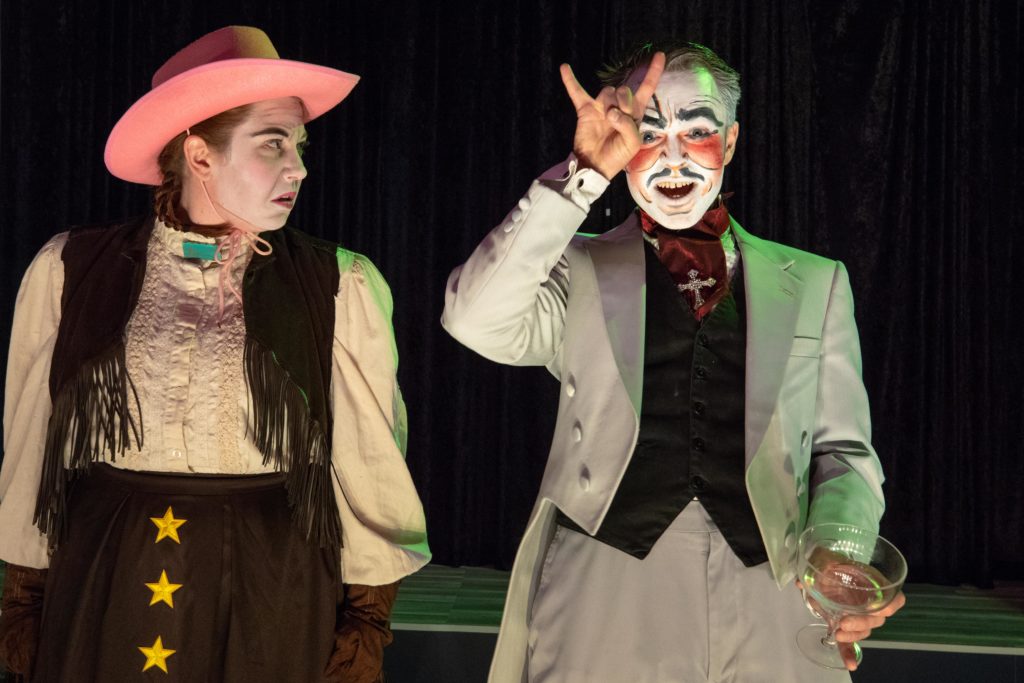 The problem facing satirists today: how does one parody a president who parodies himself with every tweet? Or dramatize a political-cultural-media landscape that already is pure, stage-managed spectacle?

The mocking mimicry of “Saturday Night Live” produces laughs and ratings, but it is safe satire, lampooning aberrant individuals while saying nothing about the forces and systems that produce them. If anything, the endless late-night TV attacks on Trump tend to worsen the situation by presenting the president and his circle as a joke rather than a clear and present danger. And of course they also help our solipsist-in-chief maintain his stranglehold on our attention.

The Conspirators’ raggedly, bitterly funny—but not too funny—production of “The Deck Chairs (or Make the Titanic Great Again)” is trenchant Brechtian satire with content. Underneath playwright Sid Feldman’s goofiness there’s sharp, self-questioning intelligence preventing this farce from becoming yet another diversion, a reshuffling of the proverbial deck chairs while society takes on water.

From the moment the cabaret-style play begins, with a painfully prolonged and slightly deranged version of Celine Dion’s “My Heart Will Go On” (the love theme from “Titanic”), we know we are on a ship of fools, adrift on a sea of self-delusion. The clownishly made-up characters, with their head-jerking, rim-tap-underscored line deliveries, exude nutty decadence. There’s a smug millionaire with the wonderful name Mittens Robert-Baron (Nathaniel Fishburn), a sleazy-crazy Russian officer, General Mikhail Flynnsky (David Gordezky), a religious maniac, Sr. Palin (Ali Janes, who also plays shipboard detective Jimmy Mulhauser), a muckraking journalist, Marylouise Kelly McEvers O’Kelly (Hillary Gokenbach) and the manager of a Wild West troupe, Lizzie Warbach (Kate Booth), the play’s feisty, skeptical good guy. All are gathered in the ship’s lounge at the moment of fatal impact, only to encounter a louche, cheddar-hued con man named Drumpf (Brian Rohde), who places himself in charge and declares that he will appoint a committee to investigate the fake news about an iceberg. Drumpf is accompanied by creepy henchman Benjamin “Cab” Callibus (Paul Bunton), a scalpel-wielding surgeon whose cutting skills come in handy when dealing with annoying reporters.

As the ship goes down, the metaphors and allusions pile up and blend together: We are on the Titanic, doomed and cruelly unequal to the end; we are in Weimar Germany, watching the institutions of democracy decay; we are in year two of the Trump presidency, hoping that a slow-moving FBI investigation will save us from ourselves. Somehow director Wm. Bullion keeps this episodic, multi-level show together, thanks to an energized cast that combines crackerjack timing with a winning playfulness.

Feldman and company go beyond the typical liberal Trump-bashing into the nitty-gritty of class. In a clever touch, even the programs are segregated, with “third-class” and “steerage” audience members given slapdash one-page photocopies (which order readers to allow first and second-class theatergoers to use the restrooms first), unlike the glossy and obsequious playbills provided to those in the choicer seats. Drumpf may be an unlettered buffoon, but he shows a canny grasp of sociology as he works to discredit and supplant the ship’s chain of command, forge an alliance with the first-class passengers and gull and intimidate the restive masses, all while feeding his bottomless appetite for burgers and adulation.

In the spirit of anarchy, “Deck Chairs” eschews a clean, linear plot. But its digressions sparkle, especially the play within a play depicting “It’s a Wonderful Life” as written by Ayn Rand. In this cracked, pro-Potter version of the classic film, libertarian angel Clarence encourages George Bailey’s suicide, telling him that “without the burden of your coddling, the people flourished.”

The play’s political analysis isn’t perfect—more could be made of the role of racism and xenophobia in winning over the lower decks—but this is nitpicking. If you like your theater smart, sharp-edged and in touch, you should see “The Deck Chairs.” The ending alone—with Drumpf and his repugnant buddies hogging the lifeboats—is worth the price of admission, reminding us that however entertaining the Trump follies may seem, in the end the joke is on us. (Hugh Iglarsh)