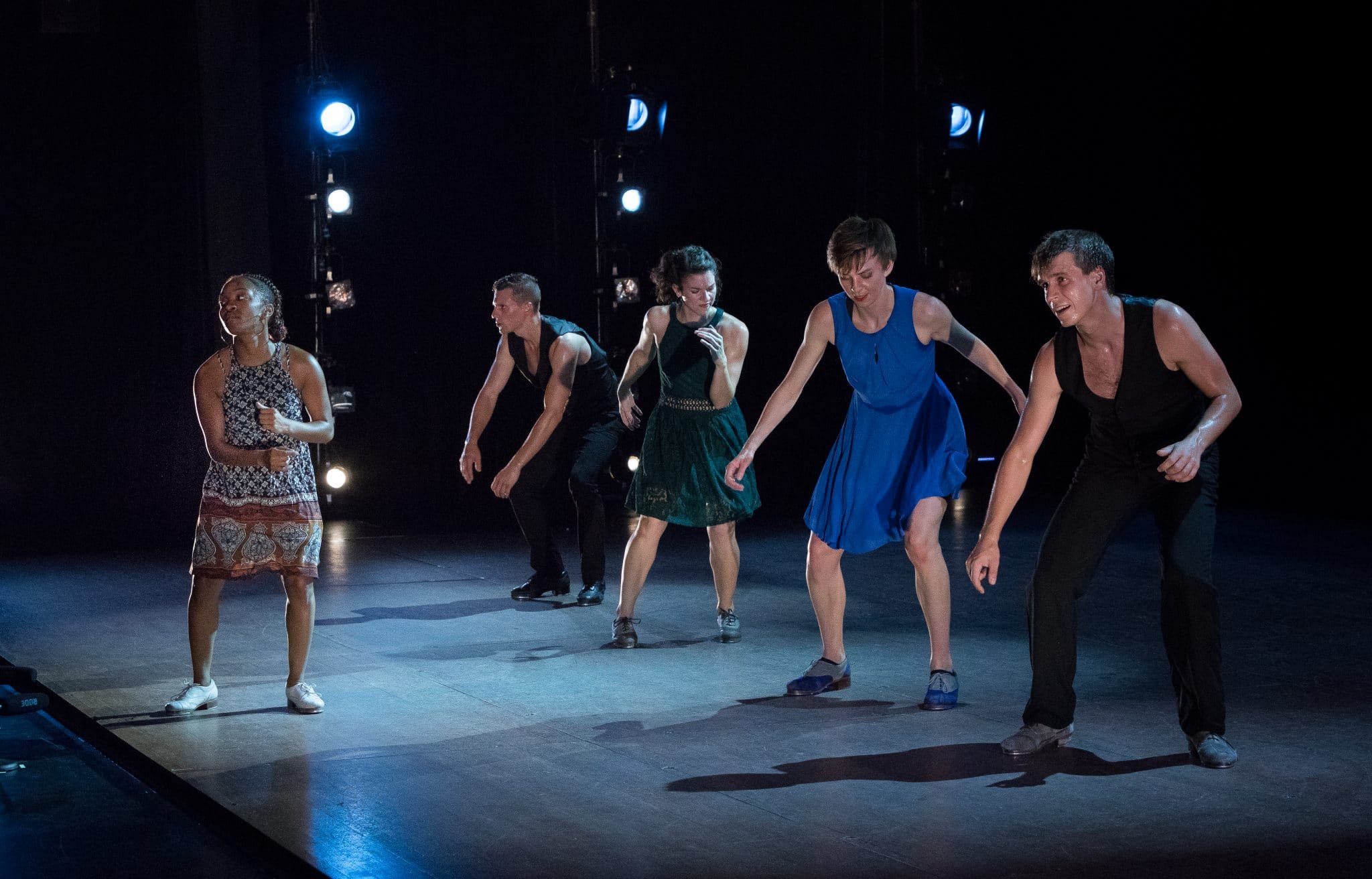 It’s a swampy Saturday afternoon on a particularly steamy Taste of Chicago weekend, and Studio B of the American Rhythm Center, on the third floor of the Fine Arts Building across from Grant Park, gives little respite. A window-unit air conditioner and two large fans struggle to keep up with both the humidity blanketing the city and the collective sweat of the ten dancers in Chicago Human Rhythm Project’s resident tap company, Stone Soup Rhythm, who are rehearsing for the series of performances in CHRP’s upcoming Rhythm World festival. I sit at the end of a row of chairs arranged for a half-dozen visitors (generously, if perhaps unreasonably situated closest to the a/c), next to CHRP’s founder and executive director Lane Alexander. The windows of the 1,000-square-foot Studio B overlook, in a twist of irony, the base of an air shaft housing about a dozen central-air-conditioning compressors. Most of the dancers glisten with sweat. CHRP’s visiting artist Dani Borak, by contrast, looks like he just emerged from a dive in the lake.

Borak is running the company through new pieces he created for the festival, which runs July 16-22, primarily in the Fine Arts Building, with events Monday night at Jazz Showcase and Wednesday night at Navy Pier. The choreography is finished, and the ten dancers run each piece top to bottom with two-to-three-minute water breaks between. Alexander leans toward me and says, “What’s amazing is that some of these guys have already been teaching for three or four hours today.” The fatigue takes no visible or audible toll on rehearsal; ten sets of feet pound out complex, up to sixty-fourth-note rhythms in super-human unison. Borak’s choreography is peppered with small audible and visual moments of surprise and delight: the well-placed, unexpected pause, clever incorporation of gestures, and more exploration of vertical space than most tap choreographers venture into. Two of the pieces are to unconventional music for tap and Borak weaves elements of hip-hop and modern dance into a style where most of the action traditionally takes place below the knees. He’s of course not the first tap dancer to do so, but one of the few to pull it off so naturally. Watching the ensemble rehearse together, it’s hard to watch anyone else; in the context of the group the ear betrays no difference, but at this proximity one can see that Borak is just a little faster, just a little cleaner, and deeply, remarkably relaxed as he hammers through unbelievably complex rhythms, be he standing on flat foot, balancing on the tip of his toe or, a favorite move, balancing on the outside edge of his standing foot. The rhythms of his feet, which seem endowed with their own intelligence, wave through his spine and limbs with a physical integration rare in tap artists. Alexander and I simultaneously exhale sharply in a half-whistle and shake our heads in delighted disbelief in a moment of particularly virtuosic dancing from Borak, whose easy pleasure in doing something incredibly difficult radiates through a half-inch of sweat. At the end of the piece, five observers clap, and Alexander rapidly pounds the heels of his wingtips on the floor in a far more voluble applause.

Borak, who hails from the Westeros-sounding town of Winterthur, Switzerland, is himself a product of CHRP’s Rhythm World festival, which celebrates twenty-eight years this summer. Performances are just one piece of the programming; the week is packed with master classes and workshops, drawing hoofers from across the country and around the globe. Borak, who has been dancing since the age of five, attended the festival in 2008 and returned to Switzerland dazzled by the possibilities of the art form. Over the next decade he honed his craft, toured the world, won a slew of competitions, co-choreographed Broadway shows and ultimately came to the states to serve as CHRP’s first-ever artist-in-residence with a three-year tenure. The Global Rhythms performances this year are among the first opportunities to see his unique, boundary-pushing style on display, many accompanied by a live jazz combo. For an intimate setting, check out Monday night’s improv-focused show, 7:30pm at Jazz Showcase. For the big production, catch Friday or Saturday night’s “JUBA! Masters of Tap and Percussive Dance” performances at the Studebaker Theater in the Fine Arts Building, featuring hoofers, foot drummers and guest artists from around the world. And prepare yourself to be seriously wowed. (Sharon Hoyer)