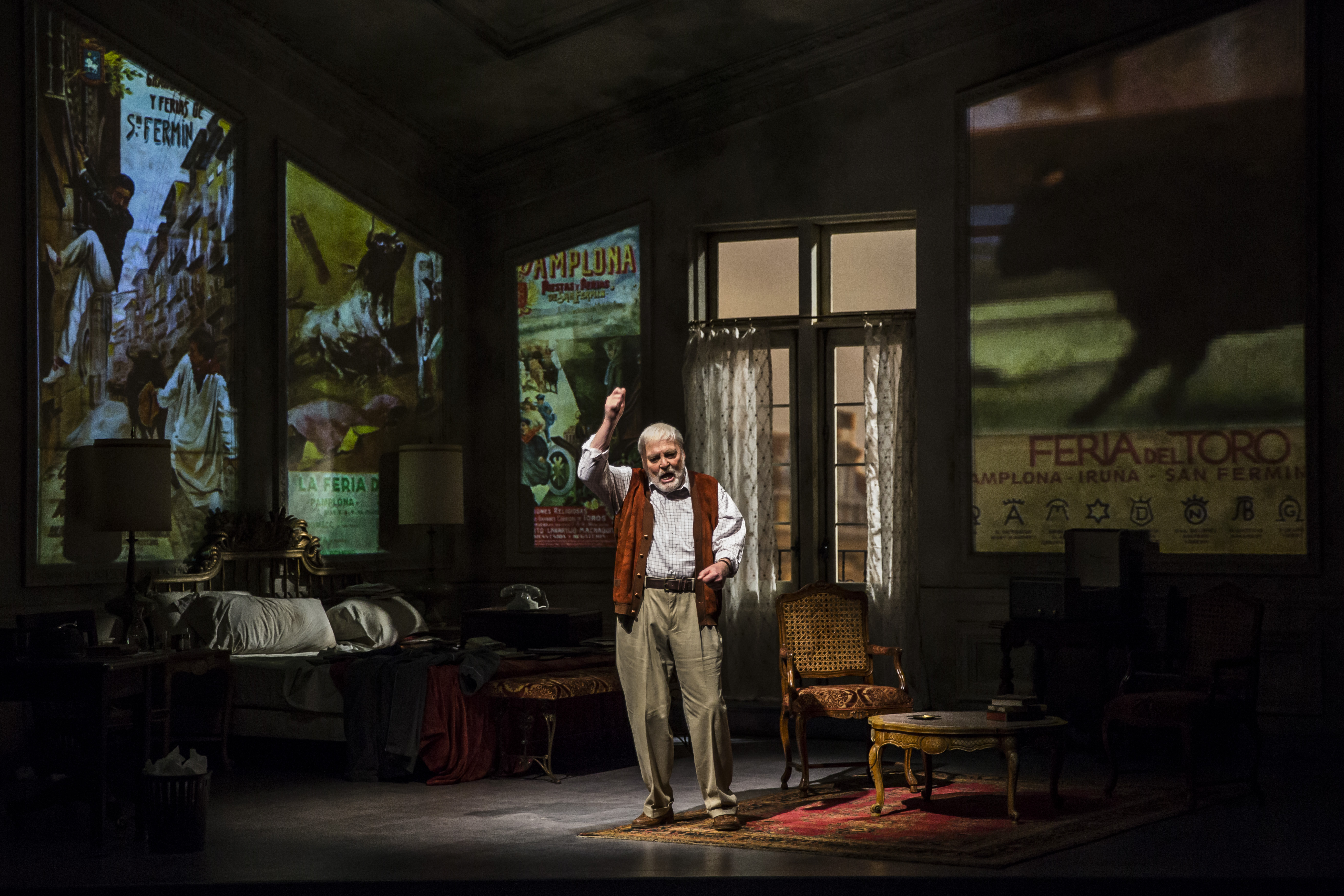 It was a warm night and the tourists were in season when we went downtown to see Stacy Keach doing Hemingway. It felt good to be in the big theater, with its plush seats and audience, and its air conditioning and lobby bar, and there was a star on the stage, and he had faced death and laughed at it and come back to laugh again. Perhaps tomorrow’s show will be totally bitched, but on this night it was cool and expectant and the star on stage was gruff and funny and sad and unafraid, and his lines were good lines, spoken manfully and wisely and not mumbled. The set was clean and well-lighted, and angular and spare, like a Nobel-worthy prose style. And that was good too.

Sorry. It’s not easy to write about “Pamplona”—Jim McGrath’s one-man, one-act play, directed by Robert Falls—without being absorbed into the Hemingway mystique. There are so many levels of drama here that even the most jaded theatergoers will find themselves emotionally wrung out by the final curtain, and at the same time, not able to take the overblown, over-exposed, chest-thumping Papa Hemingway persona quite seriously.

The real story here is Keach’s decision to come back to the Goodman and this demanding role a year after suffering a heart attack minutes into the press opening of “Pamplona.” The run was postponed as the now-seventy-seven-year-old Keach recuperated. His triumphant return is itself a Hemingwayesque feat, demonstrating courage, skill, grace and a relish for risk. His performance is nothing short of heroic, and you could feel the audience radiating pleasure and appreciation as they indulged Keach afterward with a long, warm standing ovation.

With his striking resemblance to the Oak Park-bred writer, growling voice and aggressively physical approach, Keach was born to play Hemingway (and has done so before, in a 1988 miniseries). He aces the part, showing a man who—to his own confusion and discomfiture—morphed into a legend, a figure both larger and smaller than life, capable of writing lustrous, pared-down, perfectly balanced sentences but not of connecting to other human beings.

The story unspools in the title Spanish city in 1959, less than two years before the novelist’s suicide in Idaho. Hemingway is chained to a typewriter, already a day late on an unbegun story about his lifelong passion: bullfighting, the ultimate sadistic bloodsport. His fourth wife, Mary, has left him in a huff, hurt by his lack of attention to her and his roving eye. The hotel room—elegantly designed by Kevin Depinet and lit with a ghostly gray palette by Jesse Klug—comes to resemble a pressure cooker as Hemingway fights off his myriad demons, regrets and insecurities. As he feels his current existence crumbling around him, the past comes to life in the form of Adam Flemming’s grainy slide projections.

Jim McGrath’s script is broader than it is deep. It’s peppered with anecdotes, some familiar and others not, but few are psychologically revealing. One feels sympathy for the playwright: it’s not easy to humanize a poster boy for toxic masculinity like Hemingway, whose life often seemed a doomed attempt to repress the sensitivity and vulnerability that animates his earlier, stronger work. There’s no escaping the fact that Hemingway’s life—that endless round of hunting, fishing, boxing and bullfights, all marinated in alcohol—had an increasingly desperate and self-parodic quality. Or that as the writer’s celebrity grew, his work shrank, overshadowed by the carousing, the broken marriages and friendships, the macho bluster covering a deep fear of aging and diminishment.

Keach gets at the precarious selfhood beneath the egotism and posing. He shows us a man almost but not quite at the brink, as when he begs the hotel clerk to send up a bottle of forbidden whiskey that never comes, or fondles a loaded pistol without firing it.

McGrath gives us only a taste of Hemingway’s work, and that’s a shame, as the writing has aged better than the writer. We don’t see the talent that captured the feel of the 1920s, launching the novelist into stardom that has never faded. The larger problem is the script’s wobbly sense of purpose and point of view. Situated somewhere between chronicle, comedy and melodrama, “Pamplona” wanders through the life, moving toward a contrived and somewhat misleading conclusion that suggests a renewal of hope and vitality. But there was to be no renewal, no second chances, in this life.

While the play has its limitations, Stacy Keach’s performance is like Hemingway himself: strong-willed, memorable, complicated. In the actor’s voice we hear a hint of the force and confidence that made Hemingway an iconic figure. But in his pinched, unhappy mouth and anxious-angry eyes we see the cost of the fame that Hemingway pursued but came to hate. (Hugh Iglarsh)