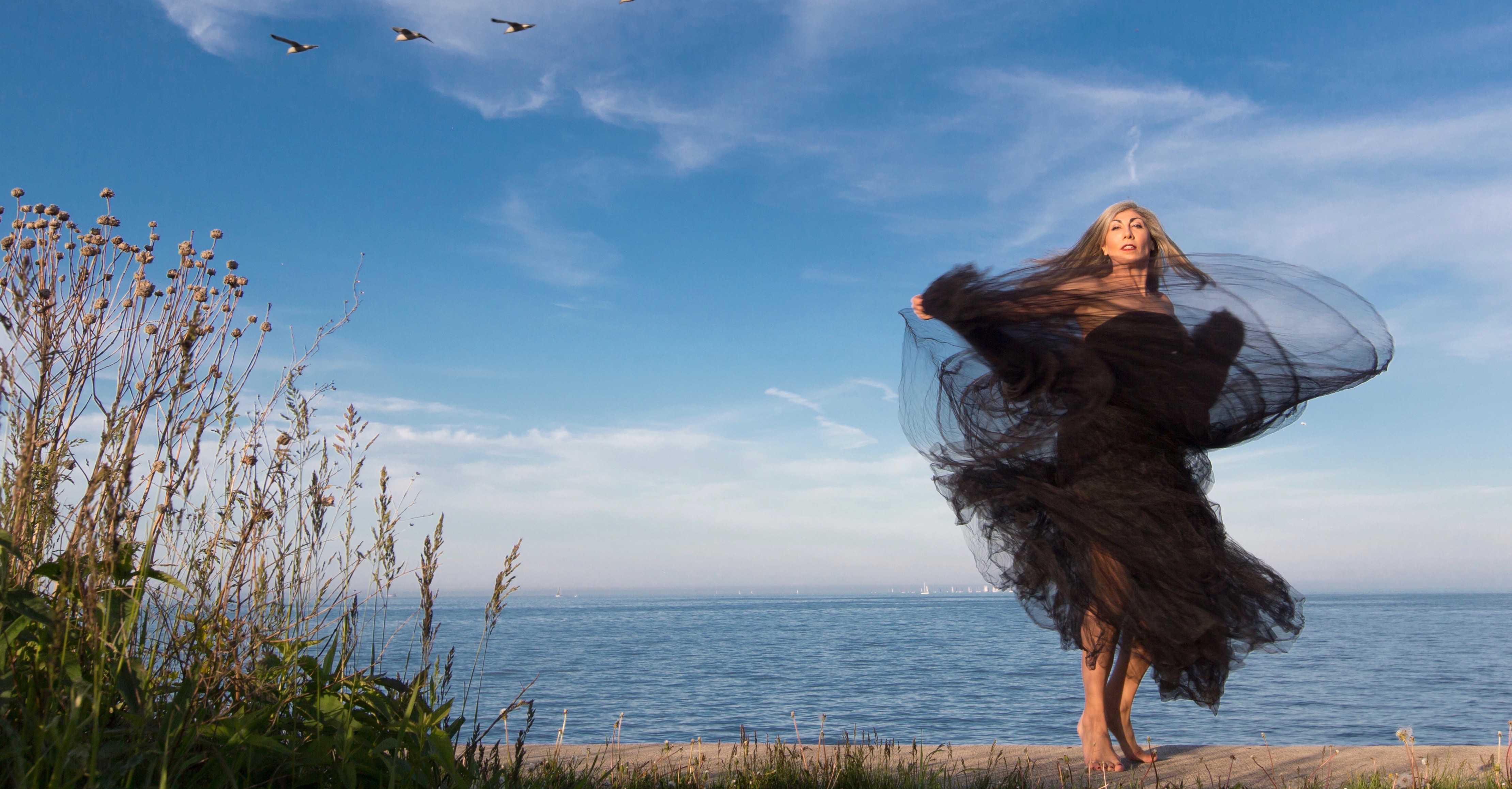 Nejla Yatkin, a German-born, ethnically Turkish independent choreographer, dancer and teacher, has called Chicago home since 2010. Yatkin makes dances for companies here and across the country, many of which take place in public spaces. Yatkin, with the help of a dozen community dancers, will lead audiences through the Burnham Wildlife Corridor September 1-16 in a series of free performances entitled “The Conference of the Birds,” as part of the Park District’s Night Out in the Parks series. Yatkin spoke with me about the inspiration behind the piece and the power of unexpected encounters with art to awaken the senses.

What is the inspiration behind the title of the piece?

I was going through an ancient Persian poem, “The Conference of the Birds,” rewritten by two French translators. The birds of the world gather because they feel there’s no leadership and they need some clarity about life—it fits our current situation as well—so they decide they need to find the bird of transformation, similar to the phoenix. They venture to find a bird that can give them wisdom, and on the journey they gain wisdom through life lessons of beauty, greed, jealousy, harmony. I’m not basing the piece on the poem but the idea of the poem, which is transformation. I’m making it more playful, but I am taking the audience on a journey. It will be interactive. There will be simple tasks for them to do. I’m creating a dance that plays with the senses; some portions will be performed, some will be participatory, some will be more focusing on experiencing their bodies in nature.

How do the community dancers come in?

The community will be a sort of chorus, helping, guiding, performing. It will be structured, but there will be room for improvisations and accidents to happen. Like in life, you’ll move through a space—it might be hot, it might be windy, it might be rainy, there might be a race going on—you have to be flexible enough to make decisions in the moment.

You’ve made a lot of dance in public places in your career. What draws you to putting dance in site-specific locations?

I think my background growing up in Berlin; we were surrounded by the Wall. There was a lot of attention paid to West Berlin’s culture; they wanted to show how exceptional and radical and free and cultured the West was, so there was a lot of music and dancing in the streets, performances in different spaces. When I was a dancer in Berlin, I worked with people who choreographed in warehouses, I worked with jazz musicians in clubs, and national theaters and opera houses. There was no concept of dance belonging only on the concert stage, but that dance belonged everywhere. When I came here to dance with a company we mostly performed for the stage. In 2000 I went to D.C., doing my own work and teaching at the University of Maryland. When you’re at the university you have the leisure to think out of the box, so in 2006 when I was touring and teaching and students would complain that they didn’t have enough teachers or enough spaces, I asked why don’t they teach each other and dance anywhere? Don’t hold yourselves back! I wondered why people expected dance to already be existing in the theater. When you look at the history of dance, it came from the people and was part of life. You danced to celebrate life, you danced to celebrate nature, you danced to mourn death, you danced because someone was born. Later on, when cities were developed and royalties wanted to show how magnificent their courts were, they started royal ballets to entertain their guests from other royal countries. We still have this idea of dance being in theaters but why not take it out? I started to experiment with dance in public spaces. It was amazing in D.C., because it’s such a formal place—everyone is so polite and correct and in business attire—we started dancing in Dupont Circle. People would stop, they were so curious. One woman started crying when I interviewed her about her reaction. She said she’d been walking this path for the last eight years but had never really seen it until we stopped her out of her gaze. She said she would never forget this place because we took her out of her daydream. Others were happy because their kids were entertained, others were angry because they were interrupted from getting where they were headed. In some cases it awakens people, in some cases disrupts them, in other cases moves them, but it creates an emotion. I like that about art—it awakens passion or anger they held within or brings them alive.

In 2009 I did “Wall Stories.” Part of the piece was on the wall in Berlin, one portion was traveling, was filmed, and one part was the fifty-minute concert dance. Then I was hooked and felt I couldn’t limit myself to exclusively creating for the theater. Dance can exist in the theater, in the streets, in the lake, on the moon. It’s the most basic human art form; you can put it anywhere and everywhere.

In 2010 I had a performance in Tegucigalpa, Honduras. They just had a coup d’état, the president fled the country and the government was shut down for a year. I performed at the reopening of the theater. I collaborated with photographers, musicians, dancers and created a site-specific piece in which people had to move from place to place. At this time, there were many places people didn’t go because it was unsafe. After this, people felt transformed; they were so happy they could move in their own city. They said they had been so afraid they didn’t see the beauty of their own city. Now there are a lot of performances happening in public places. Returning to see that was an affirming moment for me.

How do you hope attendees will see the Burnham Wildlife Corridor in this performance?

I hope they will sort of start seeing themselves a different way, by opening up their senses. It has to start from within, transformation. So I’m focusing the work on opening up the audience’s senses in different ways—how to smell something or hear something. How to see yourself or move yourself in a different way in space. I hope it will trigger changes to how you see things outside.

At the Caracol Gathering Space at the Burnham Wildlife Corridor, September 1-16. Free.